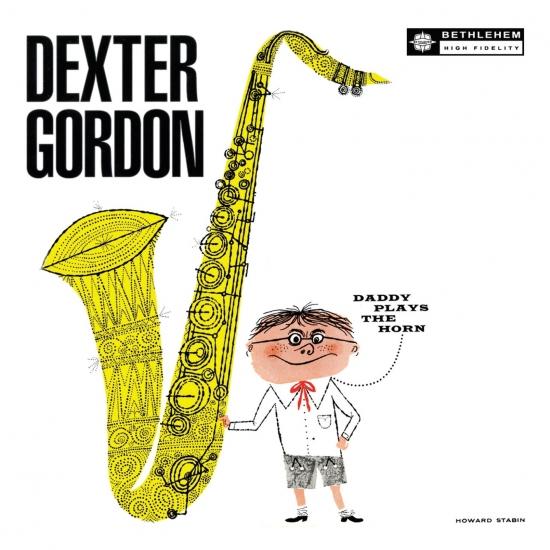 Info for Daddy Plays The Horn

Dexter Keith Gordon was born on February 27, 1923 in Los Angeles, California. Aside from being one of the tallest musicians during the ’50s Jazz Era, Dexter Gordon was also referred to as the “Father of the Tenor Saxophone” and the first musician to translate the language of Bebop to the tenor saxophone. Gordon’s 1956 release of “Daddy Plays the Horn” is a half-dozen sides of Gordon’s emotive expressions all of which embrace the warmth of his tenor & sensual phrasing.
His broad legendary sound is widely remembered for it’s sense of style, sophistication and tremendous magnetism. His music influenced jazz fans and the collective psyche of American pop-culture; breathing life into the terms “cool,” “hip,” and “slick.”
„Before Dexter Gordon became more known as a mainstream tenor saxophonist with a strong blues influence, as well as a master balladeer; in the early ’50s he held his own with beboppers like Wardell Gray in bop sax duels.
For a 1955 Hollywood session, Gordon was recorded on Bethlehem Records with a rhythm section of pianist Kenny Drew, walking bassist extraordinaire Leroy Vinnegar, and drummer Lawrence Marable. Song selection was a mixture of standard ballads and tunes written by Charlie Parker and Dexter himself.
On the title track, a twelve-bar blues taken at a mid-tempo, Dexter sets a comfortable mood strongly supported by Drew, who gets an extended soulful solo. “Confirmation,” a Bird bop staple has Dex blowing a little less frenetic than the standard for that time period. Again Kenny Drew gets to have several full choruses, almost getting equal time with Gordon, making the tune as much his as the leader. I dug Leroy’s walking bass lines here. Dexter’s strongest work is on the ballads “Darn that Dream” as well as on “Autumn in New York.” Gordon has few tenor peers who could match him for the lyricism that these ballads deserve. Only Ben Webster comes to mind.
Other highlights can be found on “Number Four” and “You Can Depend on Me,” with the former a medium tempo tune, and the latter having a little more heat. Both show Dex fully in command and a true master of the tenor, which he would continue to demonstrate for another three decades. The time given to Kenny Drew for some extended solos is a nice bonus on this LP. The remastering is first rate as each musician is warmly presented in the sound mix.“ (Jeff Krow, Audiophile Auditions)
Dexter Gordon, tenor saxophone
Kenny Drew, piano
Leroy Vinnegar, bass
Larry Marable, drums
Digitally remastered

Booklet for Daddy Plays The Horn