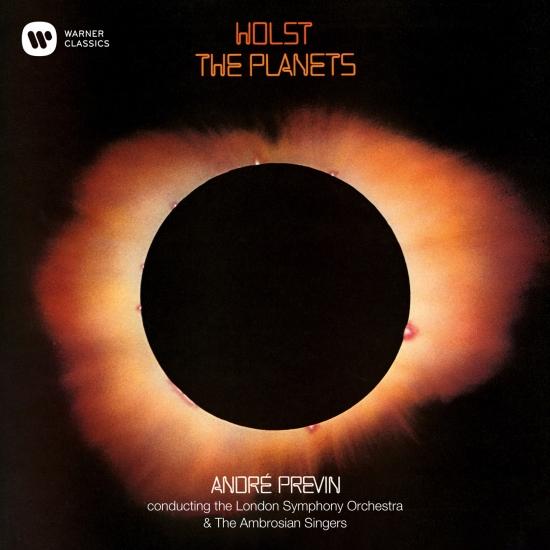 When EMI first released Andre Previn's recording of The Planets on LP back in 1973, it became an instant favorite of mine. Not only did I find the performance as good or better than anyone else’s, I thought the sound was of reference quality. As of this writing it’s around forty years later, and my opinion hasn’t changed. I still use the “Uranus” movement as an audio standard for judging other recordings and stereo equipment. I first owned the English EMI LP pressing, vastly preferring it to the American Angel pressing; then there was the EMI compact disc, which wasn’t quite as open or solid as the LP; and later the EMI Japan mastering, which improved upon the English product.
Let’s start, though, with the music. English composer Gustav Holst (1874-1934) began writing his most-famous piece of music, the seven-movement orchestral suite The Planets, during the years of “The Great War,” premiering it in 1918. That might explain why the first couple of segments are about “War” and “Peace.” He titled each movement after the astrological sign of a known planet at the time (not counting Earth), although the music doesn’t really describe zodiac signs or planets so much as it expresses feelings about the various moods of the human spirit. It was Sir Adrian Boult who conducted the first performance of the work and recorded it regularly thereafter. His final disc for EMI in 1979 remains one of my favorites; however, I still prefer this Previn recording to his.
The music begins with the theme of war in “Mars, the Bringer of War.” Under Previn, there’s a strong, menacing forward momentum, without the music sounding raucous or unyielding. Previn’s reading is warlike, to be sure, yet lyrical in its rhythmic beat.
In the second movement, “Venus, the Bringer of Peace,” Previn and the LSO handle the lovely adagio delicately, with a rising passion and Romanticism as goes along. The movement--tranquil and serene--provides a relief from the rigors of war that precede it. We also hear echoes in it of Vaughan Williams’s “The Lark Ascending,” written a few years earlier, and Previn was always a subtle and effective interpreter of Vaughan Williams.
“Mercury, the Winged Messenger” is a light-footed scherzo, which supplies a little excitement after the relative calm of “Venus.” Previn seems to delight in it, making it playful and fun.
“Jupiter, the Bringer of Jollity” comes next, and it’s a natural successor to Mercury, being a big, jovial bacchanal. While Previn ensures it is properly festive and stately, he never lets the music become so rambunctious that it overstays its welcome.
“Saturn, the Bringer of Old Age” was Holst’s personal favorite segment of the suite, and Previn gives it appropriate weight. Why Holst liked it so much I’m not sure; I find it the least interesting part of the work. Nevertheless, Previn and the LSO play it as persuasively as anyone.
After that comes “Uranus, the Magician,” the section of the disc I often use as a demo piece for friends. It has everything an audiophile loves, from deep bass to highest treble, from the softest notes to the loudest fortes; it exhibits a full demonstration of an orchestra’s capabilities. What’s more, Previn’s interpretation is appropriately magical and not a little spooky.
The suite ends with “Neptune, the Mystic,” with a wordless female chorus (the Ambrosian Singers) fading off into silence at the end. Previn’s reading is sweet and gentle and not at all sentimental as the piece concludes in the most-distant reaches of space.
London Symphony Orchestra
André Previn, conductor
Digitally remastered