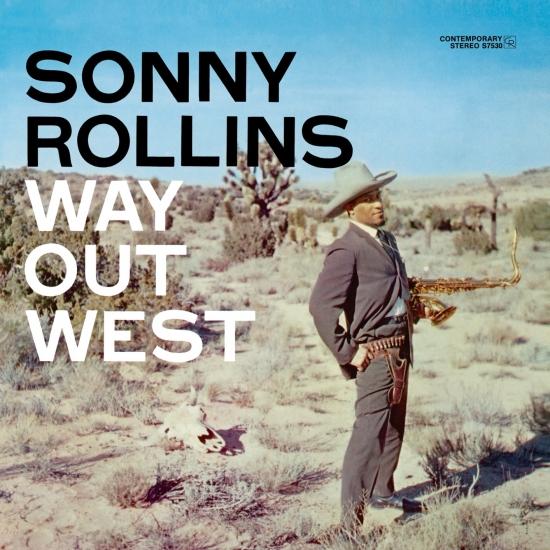 Info for Way Out West (Remastered)

Sonny Rollins was always gifted with a brawny, expressive tone and a formidable sense of swing. But on „Saxophone Colossus“ he conveyed a new-found harmonic confidence and a singular sense of thematic continuity that gave each improvisation a transcendent quality. And his attack, always cutting and direct, took on immense weight and warmth.
For his first trip out to California in March of 1957, Rollins celebrated his boyhood fascination with western imagery by interpreting classic cowpoke tunes. With „Way Out West“, Sonny was no longer simply a gifted sideman, but a consummate tenor saxophonist--ready to stretch out as a leader--and he made the bold decision to dispense entirely with the piano and carry the full harmonic/melodic load in a trio format. This unlikely combination of elements gives „Way Out West“ a special place in jazz history.
The veteran rhythm combo of drummer Shelly Manne and bassist Ray Brown are so clearly inspired by Rollins' youthful exuberance, that they transform the unlikeliest of themes--"I'm An Old Cowhand" and "Wagon Wheels"--into jazz anthems. On two takes of the former, Manne and Brown put you right in the saddle with clanking hooves and campfire counterpoint, and when Sonny yodels his final yippi-yi-yo-ki-yea, they settle into a ravishing medium groove that could swing you...well, until the cows come home. Sonny's ballad mastery is no less compelling, with hypnotic readings of "Solitude" and "There Is No Greater Love." Elsewhere, his jagged line "Come, Gone" launches him and his cohorts into full flight, while the bluesy inverted theme and cunning rhythmic stop-time of the title tune inspires collective interplay and soulful solos from each of these innovators.
"Sonny Rollins's 1957 Way Out West (whose cover features Rollins dressed in a suit, tie, gunbelt and 10-gallon hat against a backdrop of cactuses and cattle bones) is one of the most influential. Hearing it was Courtney Pine's induction into jazz sax, and many others tell the same story." (The Guardian)
"Sonny Rollins’ playing is immediately attractive because of his muscular harmonic conservatism. Where he might have never have licked every scalar corner in existence as Coltrane did, he does always perform at the highest level. Way Out West remains a standard for this higher level." (AllAboutJazz)
"The timeless Way out West established Sonny Rollins as jazz's top tenor saxophonist (at least until John Coltrane surpassed him the following year)." (AMG)
"It seems an unlikely setting for one of the greatest jazz recordings of all time, musically and sonically. But the players were Sonny Rollins and Ray Brown and Shelly Manne, and the engineer was the intuitive genius Roy DuNann." (JazzTimes)
Sonny Rollins, tenor saxophone
Ray Brown, double bass
Shelly Manne, drums
Recorded March 7, 1957 at Contemporary's Studio in Los Angeles
Produced by Lester Koenig
Digitally remastered

Booklet for Way Out West (Remastered)