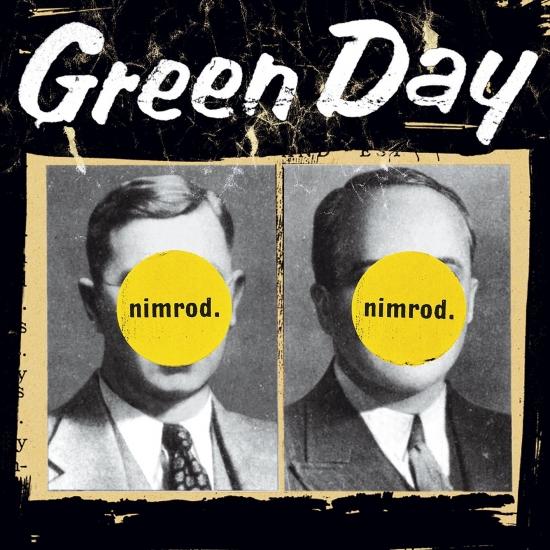 Green Day's infectious brand of thrashy power-pop is full of references to the generation of punk which preceded them, with adenoidal vocals spinning tales of youthful angst against a backdrop of hard, fast riffs. The difference, of course, is that Green Day is having more fun than the Buzzcocks would ever have admitted to. NIMROD catches the band updating their sound while holding onto the speed and recklessness that made their previous albums so exciting.
Touches like the atmospheric, flanged guitars of "Redundant" and the violin on "Hitchin' A Ride" and "Last Ride In," (courtesy of That Dog's Petra Haden) help to take the band in a new, more serious direction. Lest anyone fear that this expansion signals self-indulgence, the tight harmonies of "Scattered" and breakneck pace of "Platypus (I Hate You)" prove that, unlike most angry young men (especially those that happen to be millionaire celebrities), they've managed to hold on to every bit of the energy and rage that propelled them in the first place.
„Following the cool reception to Insomniac, Green Day retreated from the spotlight for a year to rest and spend time with their families. During that extended break, they decided to not worry about their supposedly lost street credibility and make an album according to their instincts, which meant more experimentation and less of their trademark punk-pop. Of course, speedy, catchy punk is at the core of the group's sound, so there are plenty of familiar moments on the resultant album, Nimrod, but there are also new details that make the record an invigorating, if occasionally frustrating, listen. Although punk-pop is Green Day's forte, they sound the most alive on Nimrod when they're breaking away from their formula, whether it's the shuffling "Hitchin' a Ride," the bitchy, tongue-in-cheek humor of "The Grouch," the surging surf instrumental "Last Ride In," the punchy, horn-driven drag-queen saga "King for a Day," or the acoustic, string-laced ballad "Good Riddance." It's only when the trio confines itself to three chords that it sounds tired, but Billie Joe has such a gift for hooky, instantly memorable melodies that even these moments are enjoyable, if unremarkable. Still, Nimrod suffers from being simply too much -- although it clocks in at under 50 minutes, the 18 tracks whip by at such a breakneck speed that it leaves you somewhat dazed. With a little editing, Green Day's growth would have been put in sharper relief, and Nimrod would have been the triumphant leap forward it set out to be. As it stands, it's a muddled but intermittently exciting record that is full of promise.„ (Stephen Thomas Erlewine, AMG)
Billie Joe Armstrong, lead vocals, guitar, harmonica on "Walking Alone"
Mike Dirnt, bass, backing vocals, baseball bat on "Desensitized"
Tré Cool, drums, bongos, tambourine
Additional musicians:
Petra Haden, violin on "Hitchin' a Ride" and "Last Ride In"
Conan McCallum, violin on "Good Riddance (Time of Your Life)"
Gabrial McNair, horns
Stephen Bradley, horns
David Campbell, strings arranger
Recorded March–July 1997 at Conway Studios, Los Angeles
Engineered by Ken Allardyce
Produced by Rob Cavallo, Green Day
Digitally remastered