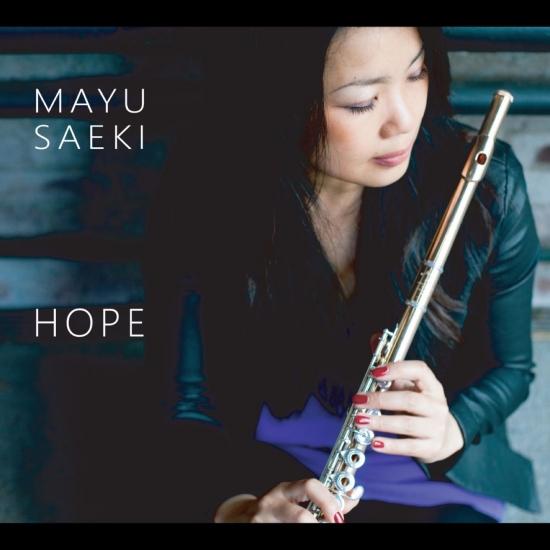 Hope tells the story of Saeki’s journey to NYC from her native Tokyo. There she left a complete life for an uncertain future in New York City. Shortly after arriving, armed only with extensive classical training and mentorship, determination and hope, not to mention an abundance of talent, the opportunity presented itself to be a part of Chico Hamilton’s group. She toured and recorded with Hamilton, appearing on several albums, including Revelation and Euphoric (both were released in 2011 from Joyous Shout! records), until his passing in 2013. His final recording, The Inquiring Mind (released posthumously in 2014) features her composition, “Hope”. During her time in Hamilton’s band, Ms. Saeki began composing and actively performing with her own trio in 2011, making her debut at Jazz at the Kitano with Aaron Goldberg on piano and Joe Sanders on bass, and leading her band on several Atlantic coastal tours. This was the beginning of the road that led Saeki to create this recording, Hope.
Hope feels like the fifth or sixth offering from a veteran on the scene. Ms. Saeki certainly had an advantage, recording with Aaron Goldberg, Joe Sanders, John Davis and Nori Ochiai (a former student of Goldberg’s and a fine modern jazz pianist in his own right), but her self-assurance comes across without dubiety. Her solo on the title track bears a joyful swagger (immediately following a gem of a solo from Mr. Goldberg). Her playing, specifically the intro, solo & outro, on “Soshu-Yakyoku” are also moments to behold, as they encapsulate the sincerity and soul of this album. And, her band mates are on board completely, and given ample space to express their brilliance. Check out Joe Sanders’ truly breathtaking playing on “Do You Know”, and behold drummer John Davis’ brilliant, flowing solo over the vamp of the same tune. Goldberg is flawless throughout, but a highlight is his accompaniment and solo on the opening track, “Dilemma”. "Libertango" and “Oblivion” showcase Mayu’s classical training and her love for the music of Astor Piazzolla (with "Oblivion" displaying Mayu’s expertise on piccolo flute). Hope truly “offers the listener a glimpse into the musical heart of one of today’s great musicians. Mayu Saeki is a shining example of the hope we all can have when we combine passion, perseverance, and a strong voice. Mayu’s voice is a gorgeous flute sound that will surely inspire hope in everyone who hears it”. – Demarre McGill, Principal Flutist of the Seattle Symphony Orchestra.
“It was a pivotal moment to record my own album, and I’m very happy that I was able to deliver before I mark my tenth year being in New York. This album is reflections of my life, filled with passion and curiosity, love of music, and hopes that I never, ever let go of. Music has been with me since I was little. It has always been honest and keeps giving me hope for a better day. I wish that this HOPE, the feeling I have, is going to reach straight to your heart and sincerely hope your day is better tomorrow. I would like to dedicate this album to the memory of my father, Kazuo, and my mentor, Chico Hamilton, who left me invaluable experiences and precious memories”. (Mayu Saeki)
Mayu Saeki, flute, piccolo, shinobue
Nori Ochiai, piano (tracks 4,5,6)
Joe Sanders, bass
John Davis, drums
Special Guest:
Aaron Goldberg, piano (tracks 1,2,3) 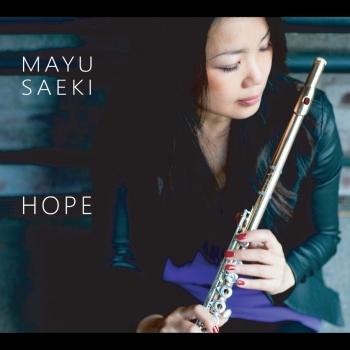 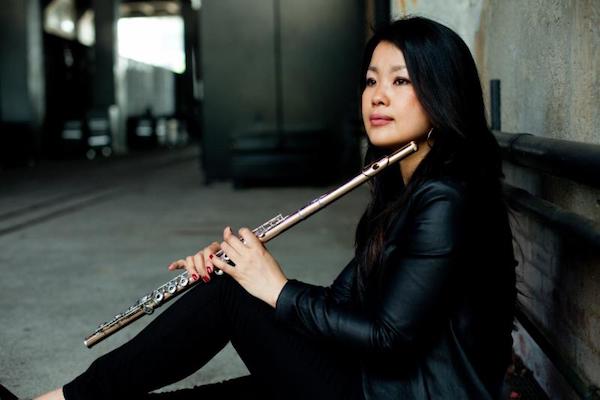 Mayu Saeki
With nearly a decade of her musical career in New York City, Mayu Saeki, Elizabeth University of Music alumni with M.M. degree, still keeps transforming herself with no limit. Her versatile and yet passionate playstyle is deeply rooted in her early childhood classical training and mentorship with Sanae Nakayama, Keiji Oshiro, Kazukiyo Inoue, Pierre Yves Artaud, Alain Marion, and the NEA jazz master, Chico Hamilton. She isn't a stranger to jazz clubs like Jazz At the Kitano and Jazz Gallery to name a few, but also is welcomed in hardcore rock venues like Brooklyn Bowl and Rockwood Music Hall to captivate wide range of audiences.
As she has relocated to New York from Tokyo, the opportunity has knocked her door to be a part of Chico Hamilton’s group. She has recorded several albums including “Revelation” and “Euphoric” (both were released in 2011 from Joyous Shout! records) under the credit of the band, Chico Hamilton's Euphoria. She has continued to work with Hamilton until his passing in 2013. His last recording, “The Inquiring Mind” (released in 2014 from Joyous Shout! records) features her composition “Hope.” Aside from working in Euphoria, she has began actively performing with her own trio from 2011, and has made the debut at Jazz at the Kitano with Aaron Goldberg on piano and Joe Sanders on bass. After a couple of Atlantic coastal tours, she has returned to the Kitano in 2013 with Goldberg joined by Matt Penman on bass.
Post-Euphoria era, her “sideman” career continues to grow with an all-female Irish music group, Four Celtic Voices toured from 2015 to 2017, a New York based rock band, Cosmos Sunshine’s Butterfly Effect as a recording member of the album, “Butterfly Fight Effect” (released in 2016 from Cosmos Sunshine label) and their new album, “Comes With The Fall” (being released on March 9, 2018 from Cosmos Sunshine label). In addition, She has recently joined in a recording project called “Mark Gross with Strings” by Grammy award-winning jazz alto saxophonist, Mark Gross. The album is expected to be out by Spring 2018, and she is featured on flute and piccolo parts respectively.
Her anticipated debut album "HOPE" will be released on March 16, 2018. The album includes original compositions previously recorded with Chico Hamilton’s Euphoria, “Dilemma,” “Do You Know…?,” and “Hope” joined by Aaron Goldberg (special guest) and Nori Ochiai on piano, Joe Saunders on bass, and John Davis on drums recorded in Brooklyn, NY.