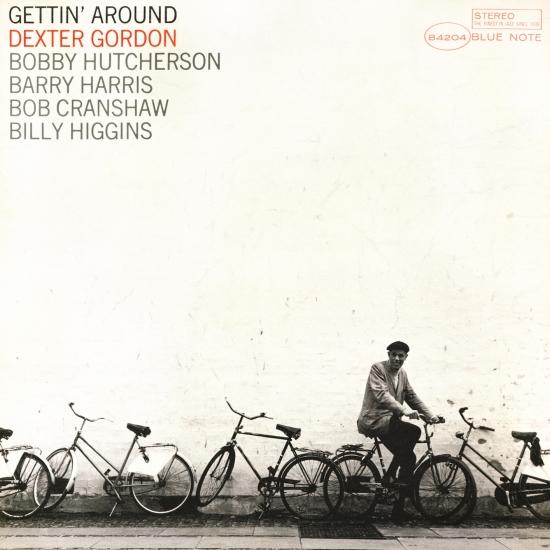 Info for Gettin' Around

After two Blue Note LPs recorded in Europe (his adopted home since 1962), Gordon finally made it back to the States to record this mid-Sixties release. Curiously, the two previously unreleased tunes seem slightly out of place with the rest of the record, and feel more akin to the kind of work Gordon's labelmates were releasing at the time. 'Flick of a Trick' is a sultry, walking eight-bar blues, while 'Very Saxily Yours,' distinguishes itself from the standards here by virtue of its riffing melody and use of hits during the head.
Having said that, part of the appeal of Gordon's approach is the way this album is built from standards. There's a sense of getting down to basics, from the passion and depths that can come out in a ballad to the sheer joy of swinging hard on the uptempo tunes. 'Le Coiffeur' now sounds a little dated (like the theme from a lost Sixties sitcom), but there's something charming about that, as there is about the loping exuberance of 'Shiny Stockings' and the presence of 'Manha de Carnaval,' a recent movie theme at the time.
'The Tower of Power,' 'Long Tall,' 'LT'—you don't acquire such noms de troubadour by being retiring or inconspicuous in your approach to making music. Indeed, Dexter Gordon is such a forceful presence and commanding storyteller that he can be a heavy load, requiring nothing less than the listener's undivided attention. Gettin' Around, a 2006 release of a 2005 Rudy Van Gelder-remastered 1965 session, reveals a more dulcet and demure Gordon. He softens his sound, holds back on the searing top tones, evens out his vibrato, and takes more than a page out of the Lester Young book: this is Gordon in a mellotone, a session that plays well any time and any number of times.
This is not to say the great tenor allusionist isn't up to his usual tricks. On the first chorus of his solo on 'Manha de Carnaval,' he quotes three bars of Victor Young's 'Delilah'; during his own 'Le Coiffeur' (a cross between the samba 'So Nice' and Charlie Parker's 'My Little Suede Shoes'), he incorporates Debussy's 'Claire de Lune.' Finally, Gordon does for the sentimental chestnut 'Heartaches,' what Hank Mobley does for Irving Berlin's 'Remember' on Soul Station—refreshing it and transforming it into a hip tune. Only on 'Very Saxily Yours,' excluded from the original LP, does the tenor giant begin to show his customarily aggressive edge.
Bobby Hutcherson stays laid-back and in the pocket, just like Barry Harris—in fact, both musicians assume supportive roles that encourage Gordon to keep the flame burning low. Although this may not be a five-star performance like Go! or Our Man in Paris, don't be surprised if it receives more plays than some of Gordon's more essential recording dates.“ (Samuel Chell, AllAboutJazz)
Dexter Gordon, tenor saxophone
Bobby Hutcherson, vibraphone
Barry Harris, piano
Bob Cranshaw, bass
Billy Higgins, drums
Recorded from May 28-29, 1965 at Van Gelder Studio, Englewood Cliffs, NJ
Engineer by Rudy Van Gelder
Produced by Alfred Lion
Digitally remastered