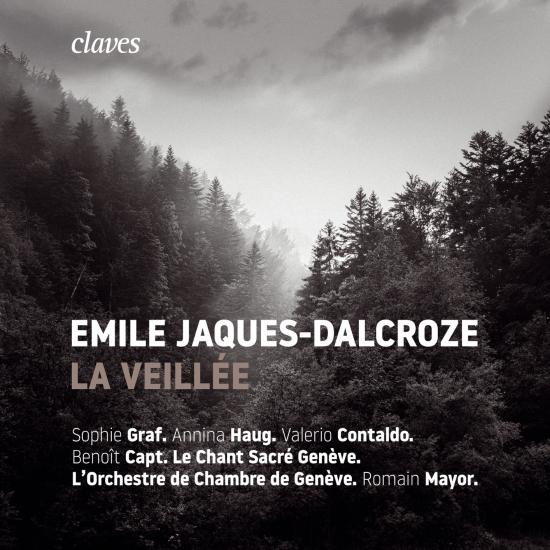 La Veillée was very dear to its author’s heart. Indeed, it started off as a nightmare and developed into a fairytale…Called upon one evening by the Société de chant du Conservatoire to stand in at the last minute for the conductor of a concert for which he obviously did not know the score, young Emile obliged the following day, feeling extremely ner­vous, according to his sister Hélène, but thankfully to everyone’s satisfaction. There followed a letter of heartfelt gratitude, adding that the Société commit­ted itself to playing the next work of its saviour, who was “so delighted that he set to work with great joy.”
As a result, the creation of La Veillée (first version) took place on 25th January 1893 in Geneva, not with­out some apparently unexpected effects, according to Alfred Berchtold in his biography “Emile Jaques- Dalcroze et son temps”*: “Should we mention here or later a charming incident told by the maestro?” At the dress rehearsal, the orchestra players were not well inclined; a crystalline voice was heard above the turmoil, it was that of a young girl [...] who cried: “Gentlemen, consider that this is the work of a young colleague; you owe him your help [...]”. The short speech immediately had effect, and, several years later, on 26th December 1899, the heroine of this rehearsal, Nina Faliero, was to marry Emile Jaques-Dalcroze, at the age of twenty-two.
The Jaques-Dalcroze family also gratefully thanks Le Chant Sacré Genève and L’Orchestre de Chambre de Genève, as well as all their interpreters, for hav­ing woken La Veillée from its sleep and for sharing it with everyone.
According to oral tradition, the Société de chant sacré is said to have been founded during the winter of 1826- 1827 in the shade of Saint-Pierre Cathedral, in the salons of a respectable English lady who was very attached to Geneva and also an excellent musician. The original group wanted to “contribute to the edification of the divine service” by improving the quality of psalm singing whilst seeking to develop itself artistically.
From 1855, the new regulations of the Société states that its aim is to “spread and maintain the taste for sacred music through studying and performing religious compositions by the Great Masters”. Throughout the XIXth century, the Société retained its original “religious” nature.
From the beginning of the XXth century, the Société progressively detached itself from the bonds that linked it to the Church, to become an institution with a purely artistic vocation, even venturing into the secular repertoire. It was a forerunner in Genevese cultural life, creating original programmes: whilst regularly performing the great classical choral pieces, it committed itself to making works known to and appreciated by its audience, such as rarely given Early Music, or contemporary works that they often first-performed, such as Frank Martin’s Golgotha in 1949, or more recently Valentin Villard’s Magnificat in 2014.
Romain Mayor has conducted the choir since September 2011. In 2012, “La Société de chant sacré de Genève” became “Le Chant Sacré Genève”.
Sophie Graf, soprano
Annina Haug, mezzo-soprano
Valerio Contaldo, tenor
Benoît Capt, baritone
Le Chant Sacré Genève
Orchestre de Chambre de Genève
Romain Mayor, conductor