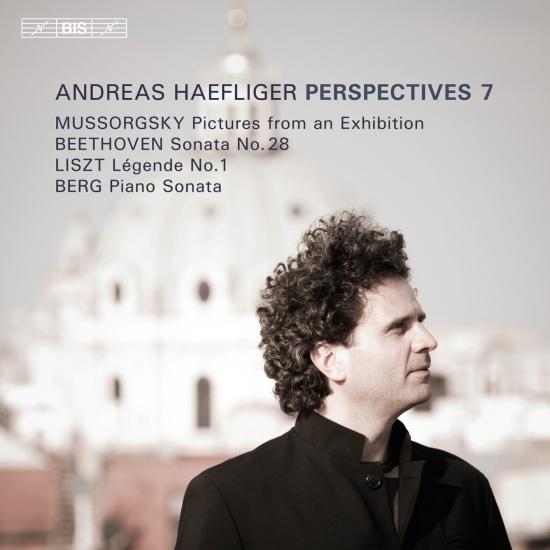 Since 2004, Andreas Haefliger has been devising a series of recital programmes named Perspectives, presenting them in concert and on disc. Each programme focusses on one or two Beethoven sonatas, juxtaposed with works by other composers (ranging from Mozart to Berio) which in some way or other interact with Beethoven’s music, and with each other. The seventh instalment in the series was premièred at the Edinburgh Festival in 2017, and was described by one reviewer as ‘Inspiringly commanding, thoughtful, lucid and sheerly beautiful’ (The Herald, Glasgow).
Perspectives 7 opens with Alban Berg’s Piano Sonata, Op. 1, a highly concentrated work in which most of the music can be traced back to the two opening gestures. This is followed by Liszt’s impressionistic Légende No. 1 ‘St. Francis of Assisi: The Sermon to the Birds’, in which we seem to hear a flock of birds chirp warble and sing. At the core of the programme is Beethoven’s Op. 101 Sonata – a work which in Haefliger’s opinion points more clearly towards Schumann than any other of the composer’s sonatas. But the grand finale of this amply-filled disc (86 minutes!) is nevertheless a highly colourful and expressive performance of Mussorgsky’s Pictures from an Exhibition, recorded – as is the entire disc – in the exceptional acoustics of the Mozartsaal of the Vienna Konzerthaus.
Andreas Haefliger, piano 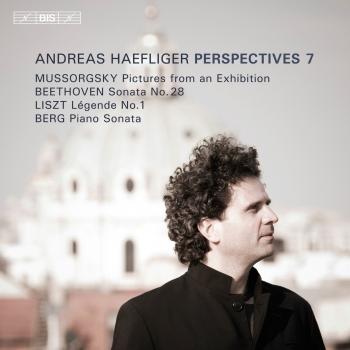 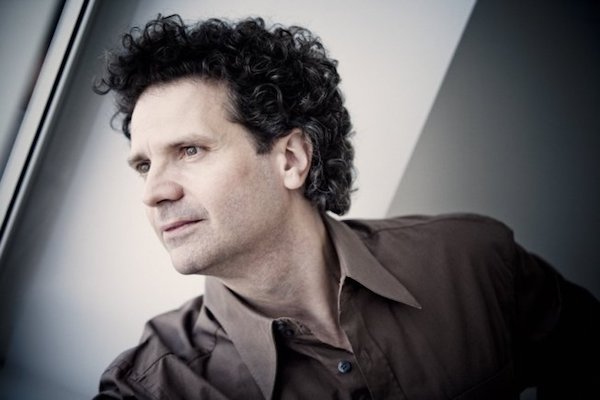 Andreas Haefliger
Coming from a rich tradition, pianist Andreas Haefliger is “consummately lyrical. Exhibitionism and pretence are antithetical to his musical personality”; he has “a vision of musical architecture second to none and a tender, profoundly cultivated sensibility, from which music flows unimpeded” (International Record Review). He has won many plaudits for his Beethoven Perspectives recitals on disc and at major halls & festivals, and is also much sought-after as a chamber musician.
Haefliger was born into a distinguished Swiss musical family and grew up in Germany, going on to study at the Juilliard School in New York. He was quickly recognised as a pianist of the first rank, and engagements with major US orchestras followed swiftly – the New York Philharmonic, Cleveland Orchestra, Los Angeles Philharmonic, Boston Symphony, Pittsburgh, Chicago and the San Francisco Symphony Orchestras among them. In his native Europe too, Haefliger has appeared with the great orchestras and festivals – such as the Royal Concertgebouw, Rotterdam Philharmonic, Munich Philharmonic, Budapest Festival Orchestra, Deutsche Symphonie-Orchester Berlin, Orchestre de Paris, London Symphony Orchestra and Vienna Symphony. He is well recognised as a superb recitalist, making his New York debut in 1988, and has ongoing regular relationships with the Lucerne and Edinburgh Festivals, and the Vienna Konzerthaus, as well as at major halls across North America and Asia.
Haefliger is a regular visitor to London’s Wigmore Hall with his Perspectives series, in which he performs the complete piano works of Beethoven alongside works by other composers from Mozart to Ligeti. This series has formed the focus of Haefliger’s solo recital appearances and CD recordings in recent years. His latest chamber music project gathers friends and top chamber musicians for intensive rehearsal periods and concerts every year at the Louisiana Museum in Copenhagen, with a tour in January 2019 to Rotterdam De Doelen, Antwerp De Singel, Madrid Auditorio and the Hong Kong Chamber Music Festival. He also continues to partner in occasional lieder recitals, most recently with Italian baritone Andrè Schuen.
After the significant success of his first recording of Mozart Sonatas for Sony Classical, Haefliger made three further recordings for Sony of Schumann’s Davidsbündlertanze and Fantasiestücke, Schubert Impromptus, and a disc of music by Sofia Gubaidulina. Later Haefliger recorded for Decca with the Takács Quartet and Matthias Goerne, winning the Preis Der Deutschen Schallplattenkritik for his Schubert disc of Goethe’s songs with Goerne. His latest Perspectives disc will be released in Spring 2018.