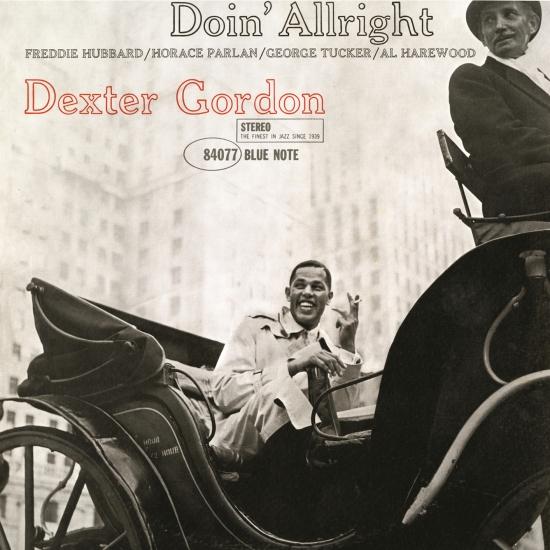 Forget the stylized in-session cover art closeup of the "jazz man at work:" eyes clenched shut, lips pursed around a mouthpiece, dim lighting. On the cover of his Blue Note debut Gordon appears perched in a Central Park carriage in a sharp-looking trench coat, one hand on his horn case, the other waving a cigarette, a big grin on his face. Doin' allright, indeed. And compared to some of his labelmates, Gordon was perhaps something of an already-arrived success, having been on the scene for over twenty years by the time of this 1961 recording.
The confidence one would expect therefore, and the sunny disposition implied by the cover, are equally borne out by the music within. Gordon could write, as evidenced by his two fine originals here, "For Regulars Only" and "Society Red," but he enjoyed working with standards as well and made them swing hard. He doubletimes his way through Gershwin's "I Was Doing All Right" with effortless elegance, and coasts over the Styne/Cahn tune "It's You Or No One" with exuberant confidence, buoyed by Al Harewood's cooking cymbal work.
„The title of this Blue Note set, Doin' Allright, fit perfectly at the time, for tenor saxophonist Dexter Gordon was making the first of three successful comebacks. Largely neglected during the 1950s, Gordon's Blue Note recordings (of which this was the first) led to his rediscovery. The tenor is teamed with the young trumpeter Freddie Hubbard, pianist Horace Parlan, bassist George Tucker, and drummer Al Harewood for a strong set of music that is highlighted by "You've Changed" (which would become a permanent part of Gordon's repertoire), "Society Red" (a blues later used in the film Round Midnight), and "It's You or No One." (Scott Yanow, AMG)
Dexter Gordon, tenor saxophone
Freddie Hubbard, trumpet
Horace Parlan, piano
George Tucker, bass
Al Harewood, drums
Recorded on May 6, 1961 at Van Gelder Studio, Englewood Cliffs, NJ
Engineer by Rudy Van Gelder
Mastered at AcousTech Mastering
Remastered by Kevin Gray, Steve Hoffman
Produced by Alfred Lion
Digitally remastered