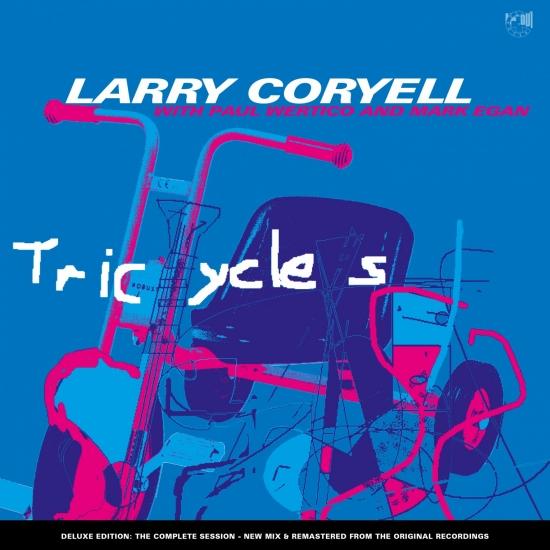 A milestone in the discography of Larry Coryell. Remixed and remastered by sound engineer Winnie Leyh exclusively for the Deluxe Edition from the original tapes. Leyh has played a major role in the excellent sound of numerous IN+OUT releases.
To be able to deliver a first-rate recording while suffering from a stubborn cold, you have to be an exceptional musician. Troubled by influenza, Larry Coryell, Mark Egan and Paul Wertico completed their autumn tour through stormy Europe in 2002 and eventually came together for a studio session near Frankfurt. “We felt bloody awful, were homesick and none of us had any appetite. I even was too weak to move from my chair”, Coryell recalls. “But somehow we managed to play.”“Somehow” is a considerable understatement. Since the result of this memorable session, now released by In+Out Records, ranks among the most outstanding of the recordings by the dynamic guitarist. After all, Coryell has released some 60 albums to this point and has excelled in a wide variety of genres with his versatile and flexible way of playing. The “flamenco jazz” on his legendary recordings with Paco De Lucia and John McLaughlin aroused worldwide euphoria. And, before this, he had sparked a fusion craze in New York with his band, Eleventh House. And since the 1980s, the classically trained guitarist has intrepidly undertaken interpretations of works by Stravinsky, Bizet and Gershwin.
On “Tricycles”, we once again hear the one-time associate of Miles Davis, Sonny Rollins and Dizzy Gillespie and many other superstars in an intimate jazz setting. For the In+Out recording he teamed up with two very special companions. The merits of bass player Mark Egan, a pupil of the late Jaco Pastorius, cannot be overstated. He founded the band Elements, which set new standards in the experimental field. On many solo albums on his own label, Wavetone, Egan developed his visionary “bass universe”, partly with the aid of self-made, eight- and ten-stringed instruments. Paul Wertico, praised as an “impressionist painter” among jazz drummers, not only participated in many Pat Metheny Group records, but is also a much sought-after session musician and producer who has worked with avant-garde trios and popular artists like Terry Callier and Special EFX. The abilities of this exceptional troika are impressively captured on this album. Wertico’s widespread knowledge of styles brilliantly harmonizes with Coryell‘s open-minded approach, and Egan has at his disposal a bass vocabulary which comes surprisingly close to the sound of the guitar. Monk classics like “Round Midnight” and “Well You Needn’t”, even the Beatles song, “She’s Leaving Home”, on which Coryell delivers a fine acoustic solo, fit beautifully into the range of original compositions. Among them are tunes which were spontaneously created in the studio, like the title track, reminiscent of Miles, or the “Stable Fantasy”, a tribute to Benny Golson and Cedar Walton, with whom Coryell worked only recently. On “Spaces Revisited”, Wertico tips his hat to doyen Billy Cobham, while on “Good Citizen Swallow”, the three once again focus on one of Coryell’s own classics.
It seems as if “Tricycles” served the trio as an effective remedy to break free from their influenza. Says Coryell: “We hope that – with our ‘musical painting’ - we have created a soundscape which represents a concrete form of collective wisdom.”
Larry Coryell, guitar
Mark Egan, bass
Paul Wertico, drums 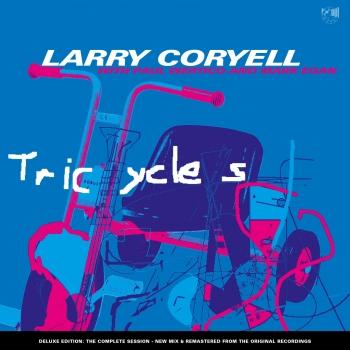 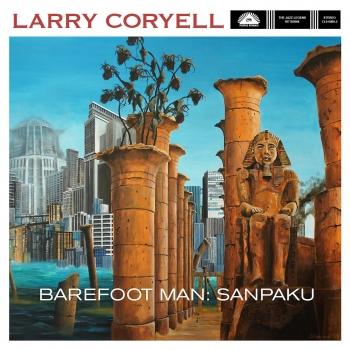 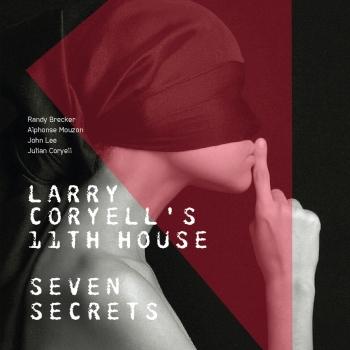 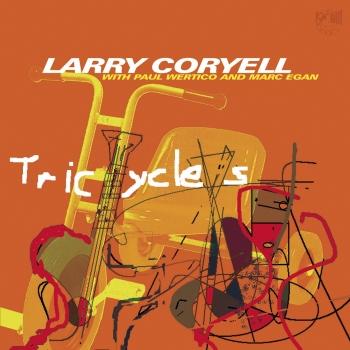 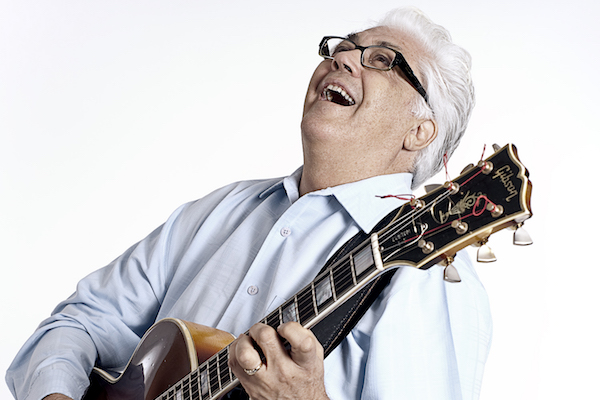 Larry Coryell
As one of the pioneers of jazz-rock -- perhaps the pioneer in the ears of some -- Larry Coryell deserves a special place in the history books. He brought what amounted to a nearly alien sensibility to jazz electric guitar playing in the 1960s, a hard-edged, cutting tone, phrasing and note-bending that owed as much to blues, rock and even country as it did to earlier, smoother bop influences. Yet as a true eclectic, armed with a brilliant technique, he is comfortable in almost every style, covering almost every base from the most decibel-heavy, distortion-laden electric work to the most delicate, soothing, intricate lines on acoustic guitar. Unfortunately, a lot of his most crucial electric work from the '60s and '70s is missing on CD, tied up by the erratic reissue schemes of Vanguard, RCA and other labels, and by jazz-rock's myopically low level of status in the CD era (although that mindset is slowly changing).
Born in Galveston, Texas on April 2, 1943 Coryell grew up in the Seattle, Washington area where his mother introduced him to the piano at the tender age of 4. He switched to guitar and played rock music while in his teens. He didn't consider himself good enough to pursue a music career and studied journalism at The University of Washington while simultaneously taking private guitar lessons. By 1965 he had relocated to New York City and began taking classical guitar lessons which would figure prominently in later stages of his career. Although citing Chet Atkins and Chuck Berry as early influences he also took cues from jazzmen such as John Coltrane and Wes Montgomery. He was also inspired by the popular music of the day by the Beatles, The Byrds and Bob Dylan and worked diligently to meld both rock and jazz stylings into his technique. This was reflected on his debut recording performance on drummer Chico Hamilton's album ' The Dealer' where he sounded like chuck Berry at times with his almost distorted 'fat' tone. Also in 1966 he formed a psychedelic band called The Free Spirits on which he also sang vocals, played the sitar and did most of the composing. Although conceptually the band's music conformed to the psychedelic formula with titles like 'Bad News Cat' and' I'm Gonna Be Free' it foreshadowed jazz rock with more complex soloing by Coryell and Sax/flute player Jim Pepper. However, it wasn't until three years later after apprenticing on albums by Vibraphonist Gary Burton and flutist Herbie Mann and gigging with the likes of Jack Bruce and others that Coryell established his multifarious musical voice, releasing two solo albums which mixed jazz, classical and rock ingredients. In late 1969 he recorded 'Spaces', the album for which he is most noted. It was a guitar blow-out which also included John McLaughlin who was also sitting on the fence between rock and jazz at the time and the cogitative result formed what many aficionados consider to be the embryo from which the fusion jazz movement of the 1970s emerged. It contained insane tempos and fiery guitar exchanges which were often beyond category not to mention some innovating acoustic bass work by Miroslav Vitous and power drumming by Billy Cobham both of whom were to make contributions to Jazz rock throughout the `70s.
His career, however, began in era of guitar rock, where he was able to rise for a time with legends such as Jimi Hendrix, Carlos Santana, and Eric Clapton. As this era came to a close, his musical expression took him on a diverse journey, and though he did not receive the level of commercial fame the aformentioned musicians had, he was still able to make his mark in music by way of the jazz & fusion world. His music continues to influence musicians and fans internationally and will continue to do so for a very long time.