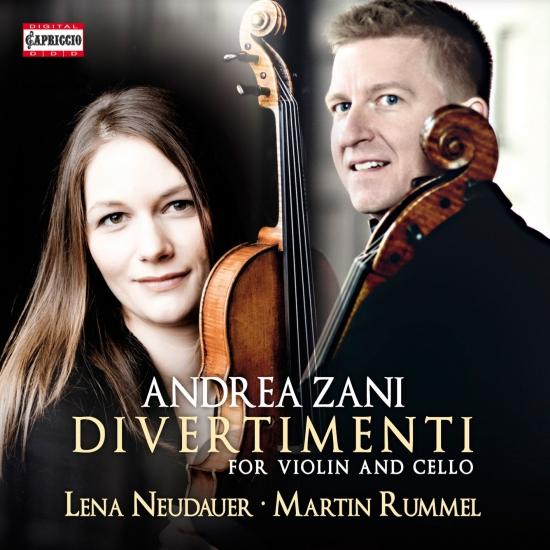 With great likelihood – at least as far as it can be said almost 300 years later – these twelve duos for violin and cello without accompanying continuo of 1734 are the earliest works with this instrumentation in which the violin and cello parts enjoy equal rights. The fact that Zani is largely forgotten today is probably due to the circumstance that his music has mainly been preserved in handwritten form and has hardly been accessible through recordings. Recently, the cello concertos (Capriccio CD C5145) and a few violin concertos have been re-discovered, but a large number of other treasures are still slumbering in different monastery and palace libraries throughout Europe. In these duos, we can experience the minimal form of chamber music with the maximal entertainment value. Andrea Zani is a composer whose name is worth noting and from whom it is to be hoped that many more treasures can be recovered.
Lena Neudauer, violin
Martin Rummel, cello 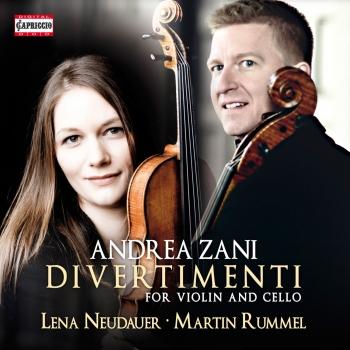 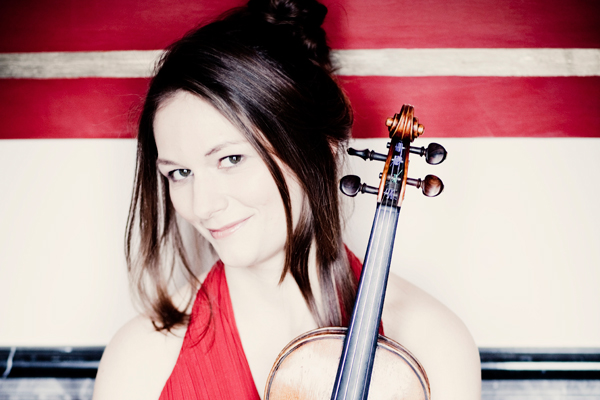 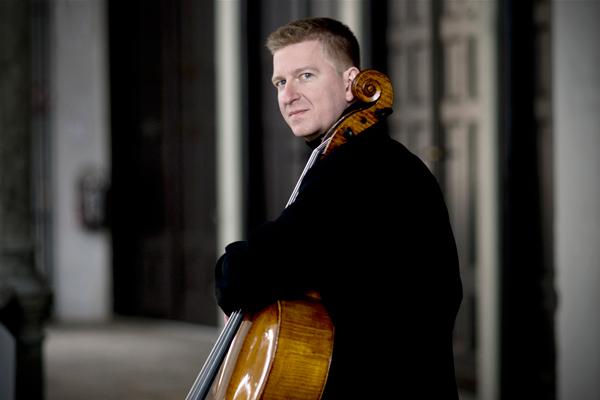 Lena Neudauer
born 1984 in Munich, Germany, began playing the violin at the age of three and at the age of ten she performed her first concert with an orchestra. As a young student, she entered the Mozarteum University in Salzburg in a class led by Helmut Zehetmair at age eleven. She then continued under the instruction of Thomas Zehetmair and later on with Christoph Poppen. Through the years she also received significant ideas from Felix Andrievsky, Ana Chumachenco, Midori Goto, Nobuko Imai and Seiji Ozawa.
From an early age Lena Neudauer gained international recognition. In 1995 she played Vivaldi's Four Seasons with members of the Munich Philharmonic in Japan and Munich. Four years later, Neudauer sparked sensation at the Leopold Mozart International Competition in Augsburg, where she not only won 1st prize, but was also awarded the Mozart Prize, Richard Strauss Prize for the best interpretation of Richard Strauss' Violin Concerto and the Audience Prize.
Since then, Lena Neudauer has been playing with orchestras such as MDR Symphony Orchestra, German Radio Philharmonic Orchestra Saarbrücken, Munich Chamber Orchestra, Nuremberg Symphony, Bern Symphony, Munich Symphony Orchestra, Salzburg Chamber Soloists, Collegium Musicum Basel, Orchestra die Padova e del Veneto, Symphony Orchestra of India, South Netherlands Philharmonic Orchestre and Orchestre National de Belgique under conductors such as Dennis Russell Davies, Mario Venzago, Mariss Jansons, Hannu Lintu, David Stahl, Wojciech Rajski, Bruno Weil, Howard Griffiths, Christoph Poppen, Ari Rasillainen, Dirk Kaftan und Pablo Gonzalez. Lena Neudauer's concerts have been broadcast many times in Germany and abroad on radio and television.
For some years now, Lena Neudauer has also dedicated herself to the performance of contemporary music and has worked, amongst others, with the Ensemble Intercontemporain and Pierre Boulez as also with the Österreichische Ensemble für Neue Musik (OENM). In her artistic activities, chamber music plays a significant role, which together with her solistic performances, also led her to perform in Festivals like the Mozart Week in Salzburg, Mecklenburg-Vorpommern Festival, Schleswig-Holstein Music Festival, Braunschweig Classix, Chamber Music Festival Hohenstaufen, Euroclassic Pirmasens, Gaia Chamber Music Festival Thun, the Festival Musical Olympus in St. Petersburg, Chopin and his Europe Festival Waschau and the Flandern Festival.
Her debut CD on the Hänssler Classic label appeard in May 2010, presenting the complete works for violin and orchestra by Robert Schumann together with the German Radio Philharmonic Orchestra Saarbrücken Kaiserslautern under Pablo Gonzalez. The CD was awarded the prestigious International Classical Music Award (ICMA) for the best concerto recording 2011. In 2013, she released a chamber music CD together with Paul Rivinius (Piano) and Julian Steckel (Cello) containing Ravel’s violin sonatas as well as his sonata for violin and cello. Lena Neudauer’s most recent recording with the German Radio Philharmonic Orchestra Saarbrücken (2014), fulfilling a long held dream, was dedicated to Mozart’s violin concertos whose cadenzas clearly exhibit the soloists own style.
She inspires and fascinates by "displaying such a sincerity of expression, such a maturity of presentation and a deep understanding of musical dimensions". (SVZ)
Lena Neudauer plays on a Lorenzo Guadagnini from 1743. In 2010, Lena Neudauer (at the age of 26) was appointed Professor for violin at the Saar University of Music.
Martin Rummel
“ [...] a tempting concept to present Rummel as the latest candidate for ‘most distinguished Viennese cellist of today’. And perhaps he is.” wrote David W Moore in the American Record Guide about Martin Rummel’s album of Merk’s “Fleurs d’Italie” (Naxos) in 2013.
Born in 1974, the cellist can currently be heard on nearly 40 albums, the last of which to raise international attention being the Complete Cello Concertos by Andrea Zani on Capriccio – an unparalleled recording career in Rummel’s generation. Martin Rummel is a regular guest at venues such as the Konzerthaus and Musikverein in Vienna, the Tonhalle Düsseldorf, de Doelen in Rotterdam or the Krannert Center in Urbana, in short: leading festivals, venues and orchestras in Europe, the US, Asia and the Pacifics. His playing is frequently honored with standing ovations from audiences, be it for concerto appearances such as his American debut with Tchaikovsky’s “Rococo Variations” or his extraordinary performances of the Complete Bach Cello Suites in one evening.
After early lessons from Wilfried Tachezi, Mr Rummel later studied with Maria Kliegel in Cologne and mainly with William Pleeth in London, whose last pupil he was to become. Not only because of his editions of all major cello etudes for Bärenreiter-Verlag he is now a renowned pedagogue himself and is regularly invited to give masterclasses all over the world. Furthermore he is valued as a chamber music partner by musicians of all generations and is a passionate ambassador for classical music – as such he is amongst other things the owner and mastermind of the music company paladino.
Besides his famous old Italian instrument Martin Rummel recently began to frequently use a cello by Martin Horvat from 2010, both individually strung by Thomastik-Infeld, Vienna.