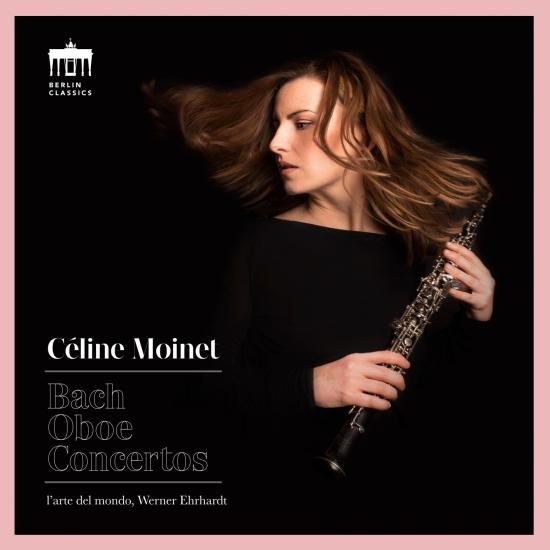 Céline Moinet is often asked why she decided to become an oboe player. She was adamant: she did not want to play a brass or stringed instrument or even a piano – it had to be woodwind. After having begun, as most children do, with the recorder, she turned at age 7 to the oboe, which had captivated her from the word go. On her new album she takes a look at Johann Sebastian Bach: "Here, the oboe becomes the narrator."
Together with the prizewinning instrumental ensemble l’arte del mondo under Werner Ehrhardt she combines a historically-informed orchestral sound with her modern Marigaux oboe. The musicians have recorded Bach's three oboe concertos: BWV 1059, 1053r and 1055 as well as the sinfonias to the cantatas "Weinen, Klagen, Sorgen, Zagen" and "Ich hatte viel Bekümmernis" in which the solo oboe is the focus. "Bach's cantatas were my first port of call. They are a rich, sophisticated source of literature for oboists; one might say they are the quintessence of his music," says Moinet. Following on from her last album centred on Schumann's Romances she enters a very different sound world this time round, though not one that is a stranger to her: she heard Alessandro Marcello's oboe concerto very early on, the second movement of which Bach ornamented. "I have strong childhood memories of the work."
Born in Lille, northern France, this young pupil of David Walter was appointed, at the tender age of 23, solo oboist of the Dresden Staatskapelle – a highly prestigious post, though it is not the only reason why she is now performing around the world. She is also pursuing a busy career as a soloist which has so far taken her to venues like the Salzburg Easter Festival, the Pacific Music Festival and to perform with the New Japan Philharmonic Orchestra. The l’arte del mondo orchestra was founded in 2004 by its artistic director Werner Ehrhardt and sees itself as a guardian of the Early Music tradition on authentic historic instruments. Working regularly with soloists such as Vesselina Kasarova, Daniel Müller-Schott, Dorothee Oberlinger and Xavier de Maistre, the ensemble has been involved in innovative programmes such as musical-intercultural projects, with the likes of the Turkish Pera Ensemble or artists from the Beijing Opera.
Céline Moinet, oboe
l'arte del mondo
Werner Ehrhardt, conductor