A Touch of Radiance Yelena Eckemoff 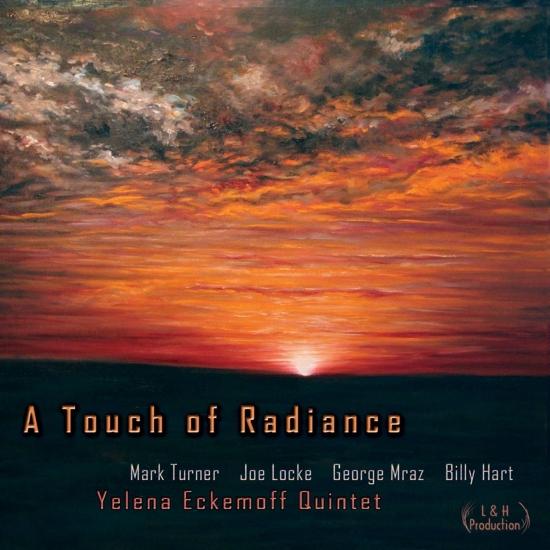 Info for A Touch of Radiance

Pianist and composer Yelena Eckemoff defines radiance as a state of happiness or confidence when everything around you is shining. On her latest CD, A Touch of Radiance, she explores that idea from ten different perspectives, drawing rich inspiration from memories, emotions, and dreams, and the inner world where all three intersect.
In addition to the ten musical expressions of radiance, Eckemoff also examines the concept in other media; she painted the vivid sunset on the album cover and wrote ten short poems to expand on each piece, all of which are included in the album s liner notes. A Touch of Radiance also expands her horizons instrumentally, marking the first time that the classically-trained pianist has recorded with more than a trio. She s assembled a stunning yes, even radiant band for the occasion, featuring saxophonist Mark Turner, vibraphonist Joe Locke, bassist George Mraz, and drummer Billy Hart.
These four gifted artists respond gorgeously to Eckemoff s music, wringing bold colors and deep feeling from pieces that are both airy and intricate. The musicians helped me to paint my musical picture, Eckemoff says. What made the project a success is that in addition to improvising brilliantly, all the musicians were extremely respectful to my written structures, tunes and melodic lines. The combination of written and improvised music as well as totally loose group improvisations has been my carefully and passionately chosen musical language. With each new recording I am more comfortable with this language.
Aside from the opening track, Inspiration, which sets the tone for the album through its air of dream-like mystery, the pieces on A Touch of Radiance and their accompanying poems move chronologically through Eckemoff s life. The playful opening melody of Reminiscence, articulated by Eckemoff and Locke, introduces a piece that harkens back to the composer s childhood in the Soviet Union, offering a glimpse of an imaginative child surrounded by a loving family. When her father enters at the poem s end saying, I met a rabbit on my way home / And look what a tasty treat he gave me for my little girl! it s as if the children s book and the world outside have merged, a memory that feels like a fantasy or a fantasy that feels like a memory.
The aptly-titled Exuberance, which portrays a six-year-old Eckemoff eagerly if clumsily helping her mother and grandmother cook a family feast, and the tender Affection, about a beloved puppy, continue these warm memories of youth in a cold country. She skips forward to her own life as a parent with the frantic Pep, dizzy with the never-ending work of a wife, mother, artist, and teacher. The shadowy mood of Reconciliation provides a bittersweet image of domestic life, with arguments and hurt feelings overcome by a loving reunion, and Encouragement celebrates the support to be found in family.
Eckemoff s music has often drawn inspiration from the natural world, and she returns to that theme on Imagination, a portrait of a snowy winter scene dreamed up on what turns out to be a sweltering summer day. Tranquility captures the pianist s ability to tune out the harsh noise of the city to focus on the sounds of nature, while the title track watches a moth drawn to light in the same way that Eckemoff found herself pulled in by the broader notion of radiance.
Very rarely am I surprised like I am with Yelena, enthuses Billy Hart. Somebody that comes out of nowhere with this much maturity and experience and musicality. You don t expect somebody that you don t know to challenge you in such an enjoyable way. In a very euphoric way it was a very satisfying project for me. -- From press release by Shaun Brady.
Yelena Eckemoff, piano
Mark Turner, tenor saxophone
Joe Locke, vibraphone
George Mraz, bass
Billy Hart, drums

Booklet for A Touch of Radiance