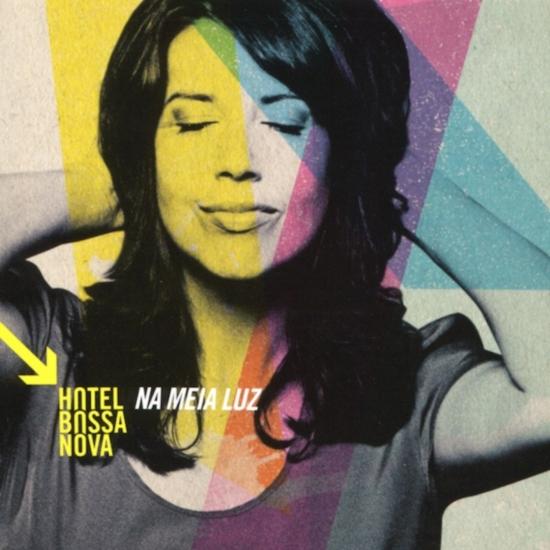 Over the last two years, Hotel Bossa Nova gave more than one hundred concerts in German speaking Europe, from Kiel in the North to Bern in the South. Concerts are opportunities for the band to shape their songs and develop their own Bossa Nova style, in which the Portuguese roots of the singer, Liza da Costa, find their precise echo.
It was that concert stage experience that the quartet brought with it to the studio in early spring of this year to make their new album. For the first time Hotel Bossa Nova recorded without any overdubs, with everything done live and played without gimmicks. It was a risk that paid off and that can now be heard on the uncannily harmonic album „Na Meia Luz“ (twilight).
The nine pieces on „Na Meia Luz“ evoke a melancholy mood that could very well provide a soothing backdrop for a dreamy interlude for lovers. The sensuously laden, agreeably rough voice of the Portuguese–Indian singer, Liza da Costa, cuddles up tenderly with the lyrically expressive Bossa Nova melodies played by the instrumentalists Wolfgang Stamm (drums), Alexander Sonntag (bass) and Tilmann Höhn (guitar).
The name, Hotel Bossa Nova may be misleading, with its association of lounge music, caipirinha on the Copacabana and similar clichés. This is not where the band is coming from. As the musicians gradually discovered that they not only played well together, but could also create their own compositions and arrangements, they began to increasingly enjoy merging their personal musical inclinations with Bossa Nova. Meanwhile, after setting their own course with the albums „Ao Vivo“, „Supresa“ and „Bossanomia“,Liza and her colleagues have developed their own distinct style, a smooth blend of Rio's melancholy Bossa Nova from the 60s, early samba, soft American jazz harmonies, a little fado from Lisbon, short flamenco references, intricate rhythms and an occasional dash of Prog Rock. Incorporated of course in the singing of Liza da Costa. „For the first time I feel good about one of our albums. Usually I am very critical of myself, but I really feel satisfied this time“, From Liza, that is convincing.
All nine new compositions are mature, complete and have a fresh, enchanting aura. No song is no arranged to death. Instead, the acoustic instruments are inspired and played with exactly the right touch. That spills over in the transparent and exceedingly warm sound of the recordings.
Right off is the wonderfully beautiful opener „Feminina“,sung softly and full of charm and the feeling of falling in love. Its enticing rhythms and the almost meditatively repeated guitar chords leave behind a delicious warm tingle in the skin. „Your face is a gift, but you it’s up to you to smile“,Liza sings to you with her distinctively insightful voice. It took time to adapt to the satin, Brazilian sound, because „....we Portuguese have a harder accent, in comparison with the Brazilian accent which is soft and somehow always has something to say. But I think I have found a good middle way between the Portuguese and Brazilian expression.“
„Rapidamente“ tells the story of a relationship that ends after a false step. She packs her bags and takes the next ferry to get away from him. In this song and in „Liberdade“, a pensive piece about the illusion of personal freedom in our system, one hears songs which could perhaps be called typical Hotel Bossa Nova compositions, with compelling but never superficial or meddlesome melodies.
Their ravishingly rendered nuances accent these pieces with an airy lightness. This bewildering ease in their music has become a Hotel trademark.
Another highpoint on the album is „Saudade“ (wistfulness – a frequently occurring theme in Bossa Nova). Another very rhythmic piece, in which this time, with the exception of a short, filigree solo by the guitarist Tilmann Höhn, none of the musicians stands out, meshing instead in a coherent collective. But the text tells another story: love has vanished, and all that is left is longing. Sorrow in silence. „My texts are often about a particular moment, like the beginning of spring in the street where I live ("Sou Contente"), or they try to capture the moment, when one realizes, that’s the right one“ ("Você"). Some of Liza’s favourite subjects.
„Na Meia Luz“ is one of these consummate, charmingly magic albums which can be listened to again and again. It is also a contemporary extension of the classical Bossa Nova. Because in the basic character of their pieces Hotel Bossa Nova draw consciously on the musical legacy of history João Gilberto's and Antonio Carlos Jobim's hymns from the late 1950s. As Gilberto and Jobim did then, the Na Meia Luz“ pieces offer up unusual harmonies and syncopations, played with a dazzling simplicity. What is fascinating is that songs like the bewitching ballade „Você“ or „Skypeando“, with its Burt Bacharach like atmosphere, sound almost an passant, but actually have vast shadings of sound, woven together with inescapable rhythms and the enchanting chamber musical virtuosity of the musicians.
With „Na Meia Luz“ - never introverted, no less entertaining, exquisitely relaxed and tinglingly sophisticated, melancholy Bossa-Jazz, Hotel Bossa Nova sets out on another episode of their development and self-assuredly charts their own future.
What better time to extend the international career of Hotel Bossa Nova beyond Europe. „Na Meia Luz“ will be the ideal upbeat for their upcoming Asia tour.
Liza da Costa, vocals
Wolfgang Stamm, drums
Alexander Sonntag, bass
Tilmann Höhn, guitar 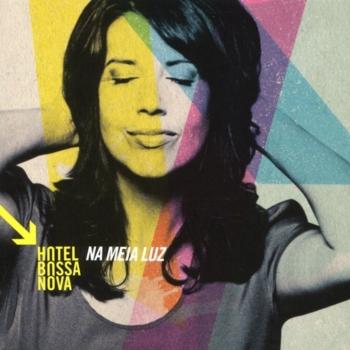 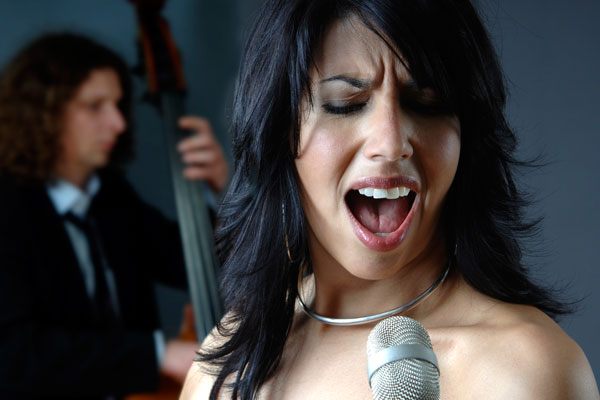 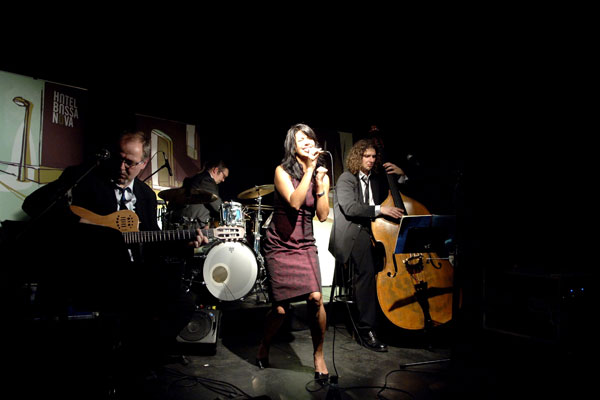 Liza da Costa und Hotel Bossa Nova
schlagen mit ihrem dritten Album „Bossanomia“ ein weiteres aufregendes Kapitel ihrer Geschichte auf, mit dem die Jazzformation aus Wiesbaden ambitionierter denn je ihre ganz eigene Lesart des Bossa Nova fortschreibt. Die portugiesisch-indische Sängerin und die drei Musiker Tilmann Höhn (Gitarre), Alexander Sonntag (Kontrabass) und Wolfgang Stamm (Schlagzeug, Percussion) dringen diesmal tief in ihre Kompositionen, ganz so als folgten sie den feinen Verästelungen der bunten Baumblätter, die das Cover des neuen Albums zieren. Im Einklang mit sich und der Natur zu sein, das ist auch ein wenig das Leitmotiv dieser versierten Musiker, die als musikalische Partner gereift sind und als Instrumentalisten nun zu neuen Höhenflügen aufbrechen. Mit melodischer Vielfalt, filigranen solistischen Einlagen und emotionaler Verve erschaffen sie hier ihr ganz eigenes Jazzuniversum. Die stilistisch vielgestalten und emotional mitreißenden Songs von „Bossanomia“, ihrem ersten Album für das renommierte Jazzlabel Enja, erweisen sich als spannungsreiches Geflecht von Ideen und Melodien, Geschichten und Gefühlen, Tempo- und Stimmungswechsel. Ein Album mit betörenden Balladen („No tapete escaldante“), magischen Melodien („Passarinho“) und einer abenteuerlichen Suite. In dieser Form sind Liza da Costa und Hotel Bossa Nova mit ihrem höchst weltgewandten Jazz bestens für die internationalen Jazzcharts und -clubs gewappnet. Bossanomia cum laude!
Liza da Costa
Our music just inspires me; I love to play our own pieces, watching them grow from little melodies into full-fledged songs. The more complex, the better. I think that’s only possible in the constellation we have. We’re a simmering pot of music, with each of us adding his own experience – and dash of waywardness. I sometimes ask myself „But is it still Bossa Nova?“
„Oh, yes!“
But we always come back to our veta madre. The Bossa Nova is our pale blue planet that holds us together, even when we set off for other worlds, we always bring back what we have found to our Bossa Nova. And we’ve matured in the last two years, with each other and with our music. You can hear that on our latest CD.
Tilmann Höhn
Don’t fly to Rio if you don’t have. Or as far as I’m concerned, to New York, or Sydney. You won’t find anything there that you don’t already know. The H&M crowd, drinking Starbucks Coffee brewed from fastidiously normed laboratory controlled beans. Next door, an S.Oliver-Store, maybe it’s called GAP now, instead of a Hugendubel book store, a Barnes & Nobles and some our-prices-are-insane electronics outlet called Crazy Eddie. Everywhere the same offer, and the same packaging. I can’t look at this Photoshop reality any more. Everyone applying the cutting edge of technology for ever duller, more uniform ideas, which in turn are the justification for the evermore cutting edge technologies. The general perception of art and music is no different. Nothing too demanding, please. The popmusic and jazz scenes are devolving into trailers for the look-a-likes of the big city downtown areas. Just take a look at a lifestyle jazz magazine. Lifestyle? With a name like Hotel Bossa Nova, it would be easy to do what a lot of Bossa Nova acts do. I can see the programs: „the easy feeling of the Copacabana, a lounge, tropical cocktails and a light touch of Samba“. The norm, right? As a band, I hope that we have composed some songs which turn their backs on these unbearable clichés, and which make clear our perspective on the Bossa Nova genre. That would make me very happy.
Alexander Sonntag
The most interesting and challenging thing for me about HBN is the sound of a quartet that transports an actually very complex music, without sounding complicated. The 4 instrument orchestration requires a lot of attention to arrangement and production, because the 4 separate voices should have equal access to transmit the musical content. We have been working on this for 3 years. I tried in production to generate a mix which made the individual voices audible but still let a whole sound emerge, which did justice to the content, and the emotions of the pieces…After many concerts one acquires a feeling for how the band sounds together. My concern is to work for this sound. In the first approximation, it is about being natural, how the individual instruments sound and which role they assume in each song. We have worked very sparingly with overdubs, so that the independent band sound is not lost. And is has been good to have found a few friends, who have the time and inclination to work on this project and move it forward.
Wolfgang Stamm
An account of my last 2 years on the road with Hotel Bossa Nova: Approximately 100 concerts later, around 30000 kilometers on the road(300 hours or a little less than two weeks sitting in a bus), and live contact with about 10000 listeners (or 100 groups of 100 attentive listeners). 80 poor night’s sleep, too late to bed, too much television (in hotel rooms). Last year our guitarist (Pedro) told me in no uncertain terms that I can’t authentically play Brazilian music, which is unfortunately true (I come from Biebrich on the Rhine and not Rio de Janeiro, the “Marvelous City”, but it still banged up my ego). And: Waiting, waiting, waiting… And ruminating over the list of reasons why HBN does not have that great, easy feel of a South Sea breeze…
But I like to play from my heart, the band is fabulous, and the reception our listeners give us is great. Success for me means being able to do what I love to do. And I can do that with Hotel Bossa Nova!