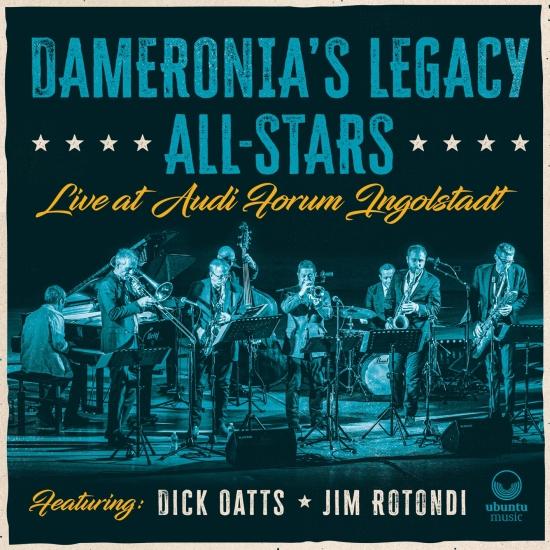 The live album features the classic and timeless compositions of Tadd Dameron, a truly innovator of bebop, well-known and appreciated for his beautiful lyric melodies. The pianist Tadley Ewing Peake “Tadd” Dameron was one of the great composers and arrangers in jazz history. He worked for Count Basie, Artie Shaw, Jimmy Lanceford, Dizzy Gillespie, Billy Eckstine and Sarah Vaughan. He also led various groups with musicians like John Coltrane and, more specifically, the drummer “Philly” Joe Jones. “Philly”, so called because of his Philadelphia roots, was a member of Miles Davis’s first great quintet and one of the most influential drummers of his time. In the 1980s he founded the group Dameronia Ensemble as a tribute to the time when he performed with his good friend Tadd Dameron.
Most of Dameron’s originals are part of the jazz repertoire these days. This octet brings these originals back in an up to date but still swinging context. The recording was made towards the end of a two-week European tour, so the arrangements were completely in place and the perfect ground for extended and inventive soloing by all the band members. The general concept was to have an octet which provides many of the options of a real big band and at the same moment still leaves enough solo space for everybody. The choice of musicians also followed that idea.
Jim Rotondi, trumpet
Dick Oatts, alto saxophone
Jon Bouterrier, tenor saxophone
Rik van den Bergh, baritone saxophone
Johannes Herrlich, trombone
Andrea Pozza, piano
Aldo Zunino, double bass
Bernd Reiter, drums 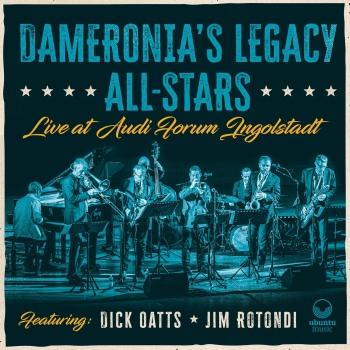 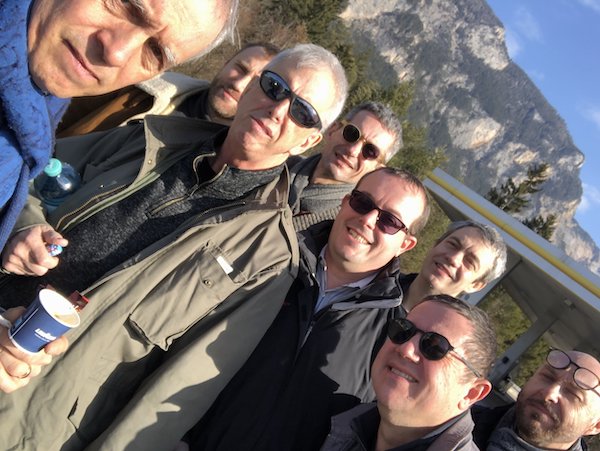 Dameronia’s Legacy All-Stars
Drummer Bernd Reiter (Austria) is the driving force behind the project. He studied in Graz and New York and, after several years in Munich, he now lives in Paris. He was awarded several prizes, including the Hans Koller Prize, the Austrian Jazz Prize and has already worked with many international jazz greats. It was his long wish to present the music of Tadd Dameron and "Philly" Joe Jones and, as a result, he put together a real ‘All-Star’ octet with outstanding jazz soloists from New York and Europe.
Jim Rotondi (USA--trumpet) and Dick Oatts (USA--alto saxophone) are among the most respected musicians of the New York jazz scene. Jim Rotondi has worked with artists such as Ray Charles, Lionel Hampton, the Toshiko Akiyoshi Jazz Orchestra, Lou Donaldson, Curtis Fuller, George Coleman, and many others. He is also professor for jazz trumpet at the University of Art in Graz. Dick Oatts has been part of the Thad Jones/Mel Lewis Big Band (now the Vanguard Jazz Orchestra) since the late 1970s and has also worked with musicians such as Freddie Hubbard, Dizzy Gillespie, Stan Getz, Chick Corea, Tito Puente, B.B. King, and Diana Ross.
Jon Boutellier (France--tenor sax) is considered the young French saxophone star and also works as an arranger for various big bands. Rik van den Bergh (Netherlands) is a baritone sax artist who has played and toured with Joe Magnarelli, Jim Rotondi, Dick Oatts, Teddy Edwards, Don Braden, Dan Barrett, Gary Smulyan, and Ronnie Cuber. Trombonist Johannes Herrlich teaches in Vienna and Munich and has also worked for years with jazz giants such as Kenny Wheeler, Joe Haider and many more.
Andrea Pozza (Italy) is considered a pianist capable of handling with great ease any repertoire and boasts collaborations with the "sacred cows" of jazz such as Harry "Sweet" Edison, Chet Baker, Scott Hamilton, Steve Grossman, George Coleman, Lee Konitz and others. Bassist Aldo Zunino (Italy) hails from Genoa and has played with many of the greats including Enrico Rava, Benny Golson, Art Farmer, Tommy Flanagan, Joe Chambers, Gary Bartz, Clark Terry, Kenny Burrell, Lester Bowie, Junior Mance, Cedar Walton, Nat Adderley, Clifford Jordan and Horace Parlan.
The exceptional trumpet ace Jim Rotondi gives his view of the project: “Similar to the groups that the great composer, Tadd Dameron, led throughout his own career, the Dameronia’s Legacy All-Stars offers a sound somewhere between small group and big band, courtesy of a dynamic five horn front line with great soloists and tailor-made arrangements. But make no mistake, this is no repertory group. This music is now!”
Concerning their new-found relationship with Ubuntu Music, Bernd Reiter comments: “I had the pleasure to be on two Ubuntu albums in the past (‘Burnin’ in London’, featuring Eric Alexander and Harold Mabern; ‘Live Encounter’, featuring Eric Alexander, Seamus Blake and Mike LeDonne). The first one was a particularly special treat and is a wonderful memory of the late, great Mr. Harold Mabern. Ubuntu’s way of presenting music and the musicians is the perfect match for this Dameronia octet album!”