With A Little Help From My Fwends The Flaming Lips 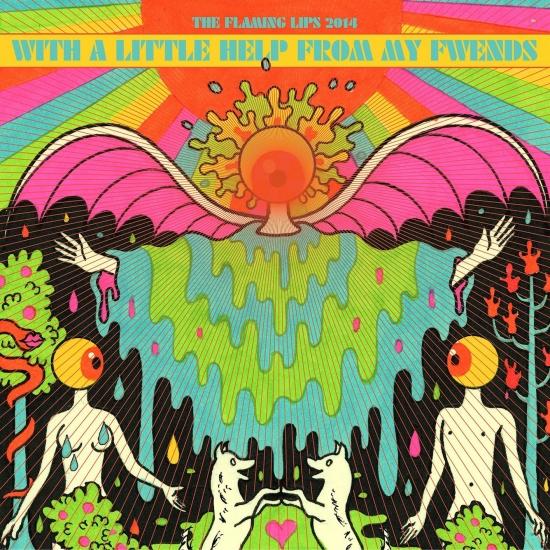 Info for With A Little Help From My Fwends

The album is a track-for-track tribute to The Beatles’ Sgt. Pepper's Lonely Hearts Club Band. Includes instant downloads of “Lucy In The Sky With Diamonds (feat. Miley Cyrus and Moby)” and “Fixing A Hole (feat. Electric Wurms)”.
„Though it may seem like a quaint, family-friendly entry into their iconic discography, the Beatles made major waves with the release of their eighth album, Sgt. Pepper's Lonely Hearts Club Band, in 1967.
With wildly intricate and far-out production that wowed listeners, and possible references to drugs and counterculture to freak out the establishment, the proto-concept album would become a major influence on psychedelic music for decades to come. Looking to revisit this landmark album, Oklahoma's fearless freaks the Flaming Lips reinvent the classic album with a slew of guests on With a Little Help from My Fwends.
No strangers to the covers album, having previously reworked Pink Floyd's The Dark Side of the Moon and King Crimson's In the Court of the Crimson King, the Lips, along with an army of guests, artfully transform the album from an intricate pop masterpiece to a fractured, acid-fried freakout. With its skittish and fuzzed-out production and tendency to shift direction on a whim, the album feels as though it's trying to re-create the feeling of hearing an album like Sgt. Pepper's for the first time in 1967, re-creating that feeling that absolutely anything could happen at any moment.
Like some of their past collaborations, the album shows that not all fwends are created equal, so even though cuts like "Getting Better" can be pretty uneven, guests like Miley Cyrus and Tegan and Sara on "Lucy in the Sky with Diamonds" and "Lovely Rita," respectively, provide the band's sound with a new dimension and attitude, providing With a Little Help from My Fwends with the kind of eclectic atmosphere that made the original so charming. Although die-hard Beatles fans might see the album as a bit blasphemous, the Flaming Lips' treatment of the classic work makes it clear the band have a great respect for the Fab Four's legacy and influence, making the album a wonderful distraction that provides fans with a window into the influences of one of rock's most enduring and joyously weird bands.“ (Gregory Heaney)
Recorded, mixed and mastered by Dave Fridmann
Mastered at Tarbox Road Studios
Produced by Dave Fridmann, Scott Booker and The Flaming Lips