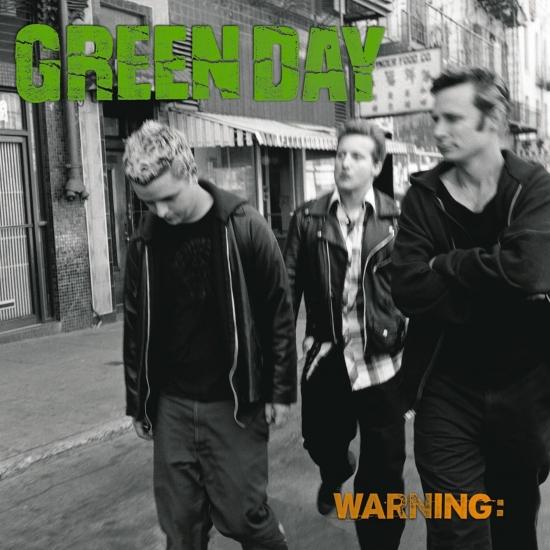 To debate whether or not Green Day truly was or is a punk band in the purest definition of the punk ethic now seems irrelevant. If nothing else, they're a pop band who can't seem to help but write good songs--in the case of „Warning“, some really good songs. This album makes up for any missteps the band may have taken since the fluke success of „Dookie“.
From the Katrina And The Waves groove of "Castaway" to the Beatles-esque harmonica on "Hold On," „Warning“ inspires a sense of musical deja vu that never crosses the line into out-and-out thievery. Hands-down, the most interesting track here is "Misery," which struts along with Doors-like quirkiness and goes through a progression of cultural movements that take instrumental turns in the form of deep strings, mariachi brass, and acoustic guitar melodies. If there's a warning to be found here, it's that Green Day has become a real band. Not very punk of them, but promising all the same.
„By 2000, Green Day had long been spurned as unhip by the fourth-generation punks they popularized, and they didn't seem likely to replicate the MOR success of the fluke smash "Good Riddance (Time of Your Life)." Apparently, the success of that ballad freed the band from any classifications or stigmas, letting them feel like they could do anything they wanted on their fifth album, Warning. They responded by embracing their fondness for pop and making the best damn album they'd ever made. There's a sense of fearlessness on Warning, as if the band didn't care if the album wasn't punk enough, or whether it produced a cross-platform hit. There are no ballads here, actually, and while there are a number of punchy, infectious rockers, the tempo is never recklessly breakneck. Instead, the focus is squarely on the songs, with the instrumentation and arrangements serving their needs. It's easy to say that Green Day have matured with this album, since they've never produced a better, more tuneful set of songs, or tried so many studio tricks and clever arrangements. However, that has the wrong connotation, since "mature" would indicate that Warning is a studious, carefully assembled album that's easier to admire than to love. That's not the case at all. This is gleeful, unabashed fun, even when Billie Joe Armstrong is getting a little cranky in his lyrics. It's fun to hear Green Day adopt a Beatlesque harmonica on "Hold On" or try out Kinks-ian music hall on "Misery," while still knocking out punk-pop gems and displaying melodic ingenuity and imaginative arrangements. Warning may not be an innovative record per se, but it's tremendously satisfying; it finds the band at a peak of songcraft and performance, doing it all without a trace of self-consciousness. It's the first great pure pop album of the new millennium.“ (Stephen Thomas Erlewine, AMG)
Billie Joe Armstrong, vocals, guitar, harmonica, mandolin, piano
Mike Dirnt, bass, backing vocals, farfisa on "Misery"
Tré Cool, drums, percussion, accordion
Additional musicians:
Stephen Bradley, horn
Benmont Tench, guest vocals on "Fashion Victim"
Gary Meek, saxophone
James Creepies, vibraslap
David Campbell, string arrangements
Recorded April 1 – May 25, 2000 at Studio 880, Oakland, California
Engineered by Ken Allardyce, Tone
Produced by Green Day
Digitally remastered