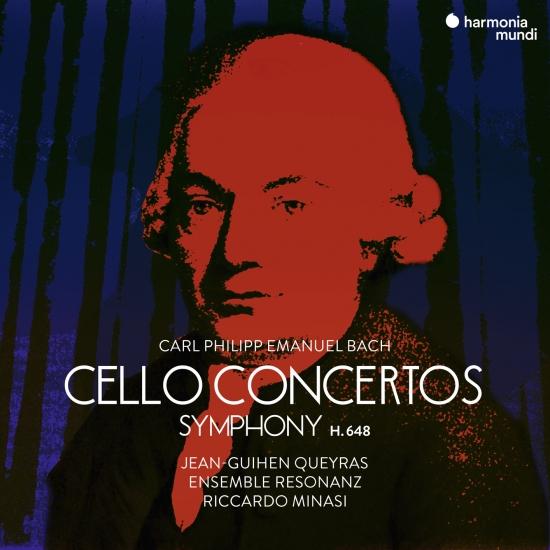 More than just a challenge to orthodoxy . . .
Why should music ‘before Mozart’ now be the sole preserve of period-instrument orchestras? For some years now, Ensemble Resonanz has challenged this idea, without ever neglecting the notion of the sheer pleasure to be derived from the concertos and symphonies of the great C. P. E. Bach. Like their guest soloist Jean-Guihen Queyras, all the musicians master both styles of playing (on metal or gut strings) with dazzling virtuosity. This is the first disc on harmonia mundi to celebrate their collaboration with maestro Riccardo Minasi.
Ensemble Resonanz
Riccardo Minasi
Jean-Guihen Queyras, cello 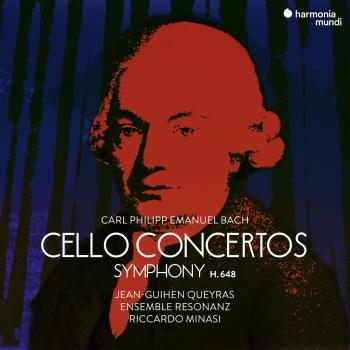 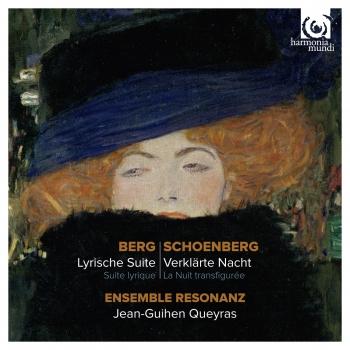 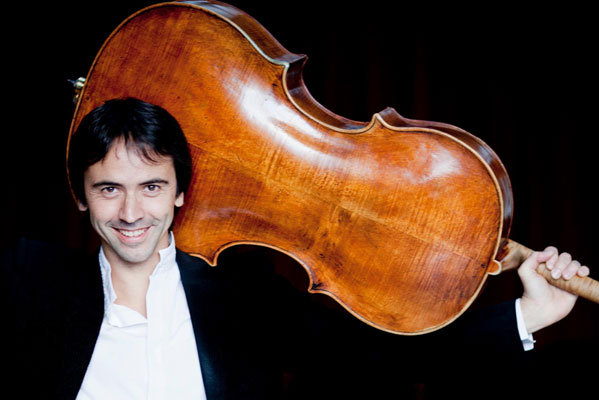 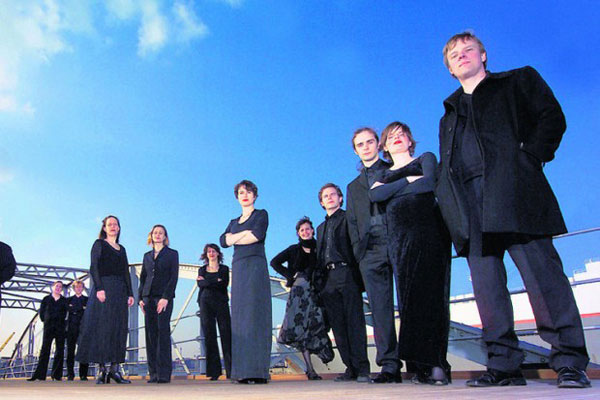 Jean-Guihen Queyras
much awaited recording of Bach's complete solo suites was released last year and received immediate acclaim by the French press (Diapason d'Or and CD of the month in Diapason, CHOC du Monde de la Musique etc.), followed by the release of his Debussy-Poulenc CD with pianist Alexandre Tharaud, which was awarded the Diapason d'Or de l'Année in 2008. Previous CDs include Schubert's ‘Arpeggione' alongside works by Berg and Webern (again with Alexandre Tharaud) (Gramophone ‘Editor's Choice', BBC Music Magazine ‘Chamber Music Choice', ‘Strad Selection', Scherzo ‘E' for Excepcional), Dvořák's cello concerto with the Prague Philharmonia under the baton of Jiří Bĕlohlávek (BBC Radio 3 CD of the week, November 2005) and Haydn and Monn's cello concertos performed on a period instrument with the Freiburger Barockorchester, praised in both The Independent on Sunday and the Saturday Telegraph as the definitive baroque version.
Jean-Guihen's extensive repertoire includes more recent works, which he performs internationally: he gave the world premieres of Ivan Fedele's cello concerto (Orchestre National de France, Leonard Slatkin) and Gilbert Amy's concerto (Tokyo Symphony Orchestra at Suntory Hall, Tokyo). He also premiered Bruno Mantovani's concerto with the Saarbrücken Radio Sinfonieorchester and Phillippe Schoeller's Wind's Eyes with the SWR Sinfonieorchester Baden-Baden und Freiburg. The last three appear together on a CD for harmonia mundi His particular focus on repertoire for solo cello, which brilliantly demonstrates the exceptional narrative and expressive force of the monodic instrument, led him to devise and perform several series of concerts featuring the Suites by J.S Bach alongside contemporary works at the Triphony Hall in Tokyo and the Théâtre du Châtelet. He also commissioned six composers (Kurtag, Harvey, Mochizuki, Amy, Nodaïra & Fedele) to write an ‘echo' to each of the six Bach Suites for solo cello, in a project called ‘Six Suites, Six Echos', which he has performed in such prestigious venues as the Konzerthaus in Berlin, Hamburg's Musikhalle and the Cité de la Musique in Paris.
In 2008, Jean-Guihen made his BBC PROMS debut to unanimous acclaim (Haydn in C) and performed Britten's Symphony for cello and orchestra at the Aldeburgh Festival. He has been invited as a resident artist of the Muziekcentrum Vredenburg in Utrecht, the Concertgebouw in Amsterdam and De Bijloke in Gent. Regular chamber music partners include the pianists Alexander Melnikov and Alexandre Tharaud and the violinist Isabelle Faust. He is a member of the Arcanto Quartet with Tabea Zimmermann, Antje Weithaas and Daniel Sepec, and performs regularly with Zarb specialists Kevan and Bijan Chemirani.
His solo engagements with orchestras include the Philharmonia, Orchestre de Paris, Tokyo Symphony Orchestra, Tonhalle Zürich, Gewandhaus orchestra, Radio-Sinfoniorchester Saarbrücken, SWR Sinfonieorchester Stuttgart, SWR Sinfonieorchester Baden-Baden/Freiburg, BBC National Orchestra of Wales, Yomiuri Nippon Symphony Orchestra, Tokyo Symphony Orchestra, Prague Philharmonia, Berlin Konzerhaus orchestra, Radiosinfonieorchester Wien, Orchestre de la Suisse-Romande, Münich Chamber Orchestra, Amsterdam Sinfonietta, DeFhilharmonie Antwerpens, Sao Paulo State Philharmonic Orchestra, Hallé and City of Birmingham Symphony Orchestras, BBC Symphony Orchestra, under the baton of Heinz Holliger, Franz Brüggen, Günther Herbig, Günther Herbig, Gerd Albrecht, Ivan Fisher, Hans Graf, Philippe Herreweghe, Marek Janowski, Denis Russell Davies, Jiří Bělohlávek, Ed Gardner, David Stern, Leonard Slatkin, Olivier Knussen, Roger Norrington, Jean-Claude Casadesus, Muhaï Tang, John Neschling and Andras Ligeti. Jean-Guihen made his debut in the main hall at Carnegie Hall in New York with Concerto Köln in March 2004.
Jean-Guihen was the solo cellist of the Ensemble Intercontemporain, with whom he recorded the Ligeti Cello Concerto for Deutsche Grammophon, conducted by Pierre Boulez (Gramophone Contemporary Music Award). For harmonia mundi he also released Britten's suites for solo cello and a collection of Hungarian works by Kodaly, Kurtag and Veress, which was awarded a Diapason d'Or. Jean-Guihen has also recorded Dutilleux's Tout un Monde Lointain for Arte Nova/BMG and Boulez's Messagesquisse for Deutsche Grammophon (Gramophone Contemporary Music Award).
In November 2002, Jean-Guihen Queyras received the City of Toronto Glenn Gould International Protégé Prize in Music, awarded to him by Pierre Boulez and the Glenn Gould Foundation, and was recently made ‘Instrumental Soloist of the Year' at the French Classical Music Awards as well as ‘Artist of the Year' for readers of the Diapason magazine.
Jean-Guihen Queyras is Professor at the Musikhochschule in Stuttgart, Germany and one of the Artistic Directors of the ‘Rencontres Musicales de Haute-Provence' which take place in Forcalquier in July each year.
He plays a cello made by Gioffredo Cappa in 1696, on loan from Mécénat Musical Société Générale since November 2005.
Ensemble Resonanz
represents a new generation of musicians: they bridge the gap between traditional and contemporary music and seek to contrast as well as to connect old masters with modern composers. With passion they dedicate themselves to the promotion and development of new string repertoire and up-to-date interpretations of classical works.
Performing as both a chamber orchestra and an ensemble of soloists, the ensemble is well represented in the subscription programs of leading concert halls as well as at modern music festivals. It conducts regular concert tours in Germany and abroad and has inspired and enraptured audiences in Vienna, Paris, Venice, Amsterdam as well as in India, New York and Mexico.
Since 2010, star cellist Jean-Guihen Queyras is Artist in Residence of Ensemble Resonanz and presents a series of concerts with the ensemble as both soloist and musical director. Other partners of the ensemble include not only renowned soloists and conductors but also media performers, stage directors, actors, and artists. Among them in the last years were Beat Furrer, Fazil Say, Imre Kertész, Matthias Goerne, Tabea Zimmermann, Roger Willemsen, Peter Rundel, Helmut Lachenmann, Reinhard Goebel and the RIAS chamber choir.
In 2002 Ensemble Resonanz settled in the Laeiszhalle in Hamburg, where it is Ensemble in Residence, and established the highly successful concert series »Resonanzen«. This is the ninth season that it has enriched the musical life of Hamburg by offering striking contrasts in its programs and combining rare and classical works of former centuries with modern music, newly commissioned works and premiere performances.