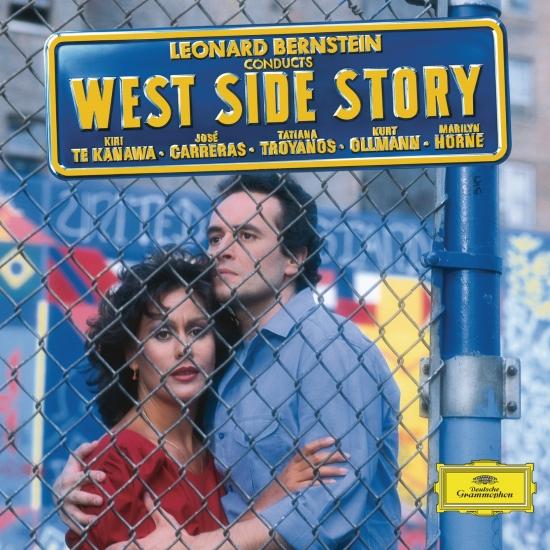 "the great vocal melodies are worthy of voices of the highest calibre...[Troyanos] spans the stylistic dichotomy to perfection in a superb portrayal of Anita. Moreover Bernstein's sons and daughter speak the dialogue most affectingly....the power of the music is greatly enhanced by the spectacularly wide dynamic range of the recording." (Penguin Guide)
"The selling point for this 1984 studio recording of West Side Story featuring opera singers is displayed on the front cover, as the words "Leonard Bernstein Conducts" hang above the title. Surprisingly, Bernstein, who is better known as an orchestra conductor than as a composer, has never before conducted a recording of the score for the Broadway musical for which he wrote the music. This, then, might be considered his definitive statement, at age 66, of his most popular music, which premiered when he was 39. If so, maybe it isn't as striking and original a work as it always seemed to be. The major, obvious flaw in this version, at least as far as a fan of musical theater would be concerned, lies in the casting. West Side Story tells a modernized Romeo and Juliet tale set in the 1950s in Manhattan's Hell's Kitchen neighborhood, as two rival gangs, the Sharks, made up of Puerto Ricans, and the Jets, referred to in this album's annotations as "an anthology of what is called ‘American,'" compete, and Maria, the sister of the Sharks' leader, falls in love with Tony, the semi-retired co-founder of the Jets. The casting problem here is that Tony is sung by Spanish tenor José Carreras, and he has the heaviest Spanish accent of anyone in the piece, even though he's supposed to be the lead "American." Since New Zealand soprano Kiri Te Kanawa sings Maria with her own version of a Spanish accent, it's hard to hear what's supposed to be dividing them culturally. As if that weren't confusing enough, there are dialogue excerpts in which Tony is instead voiced by Bernstein's son, Alexander Bernstein, who speaks in unaccented American English and sounds nothing like Carreras. (Maria's spoken dialogue is handled by Bernstein's daughter, Nina Bernstein, who affects a Spanish accent, making the transition to Te Kanawa's singing far smoother. The only problem with Nina Bernstein is that, instead of sounding like she's in love, she sounds bored.)
Now, in the world of opera, audiences are more accustomed than those in the musical theater to suspend disbelief, or just not worry so much bout verisimilitude, and simply revel in the beauty of the singers' voices. So, maybe they won't be as bothered by a Tony who sounds like he should be a member of the Sharks instead of the Jets, at least when he's singing. Maybe they also won't mind that the cleverness of Stephen Sondheim's lyrics in such songs as "America" and "Gee, Officer Krupke" is largely lost. But they may be disappointed that the composer's own conducting of West Side Story results in such a lackluster overall performance. Under Bernstein's baton, the music here comes off as smoothed out, tired, and often under-tempo. Perhaps that's the way the composer himself hears it. But after nearly 28 years, it's not the way most fans of the show remember it." (William Ruhlmann, AMG)
"Controversial as an essential Carreras recording, West Side Story isn't an opera, and neither is the tenor, operatic star José Carreras, an American-born Broadway singer. But the music is operatic in quality--let's say in durability. It is Bernstein's most established masterpiece, his surest claim to be remembered as a composer a century from now; the source is Shakespeare and the music has a seriousness, color, and intensity worthy of its subject. And this recording represents the way the composer wanted it to sound, with his choice of the best available voices. Carreras sounds like he was born to sing "Something's Coming," "Maria," and "Tonight." Perhaps he was born to sing them in Spanish, but opera lovers regularly take bigger language problems than that in stride for the sake of vocal quality." (Joe McLellan)
José Carreras, tenor (Tony)
Kiri Te Kanawa, soprano (Maria)
Tatiana Troyanos, mezzo-soprano (Anita)
Kurt Ollmann, baritone (Riff)
Marilyn Horne, mezzo-soprano
Angelina Reaux, soprano
Tatiana Troyanos, alto
Stella Zambalis, mezzo-soprano
Louise Edeiken, mezzo-soprano
Luise Edeiken, soprano
Leonard Bernstein, conductor
Digitally remastered