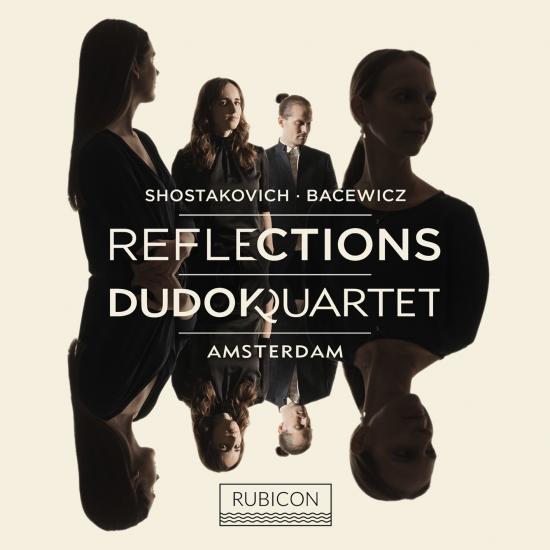 The music by Dmitri Shostakovich has been both renounced and embraced. The receptive history of his music has been coloured by the fierce battle between supporters and opponents of his music to this day. On their new album REFLECTIONS, the Dudok Quartet Amsterdam presents a plea for ambiguity in music of the 20th century.
The Dudoks themselves grew up within a musical climate which rendered contradictions absolute and left little room for polyphony. Modernism or conservatism, submission or resistance, craftsmanship or creativity: both with Shostakovich and Grażyna Bacewicz these oppositions manifest themselves as a key element of their compositional process. The music which flowed from their pencils therefore still compels a 21st century audience to relate to its own doubts and uncertainties; a conclusive interpretation would only marginalize a different possibility.
Both the main works of this album offer the musicians an exuberant roller coaster ride. In terms of ensemble playing and instrumental mastery, the music demands extreme measures from the players, leading to a breath-taking and multi-layered listening experience for the audience. To link the string quartets by Shostakovich and Bacewicz together, the members of the Dudok Quartet immersed themselves in their compositional style and techniques. Writing and recording new arrangements of Shostakovich’s Preludes for piano Op.34 gave the Dudoks a chance to relive the compositional process in a new and enhanced way. This recording features the world première of these new arrangements.
Dudok Quartet Amsterdam 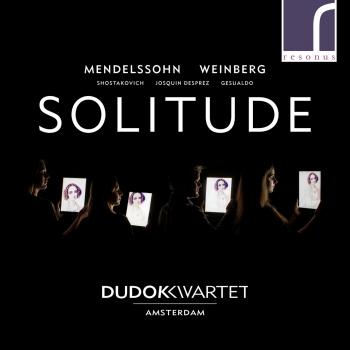 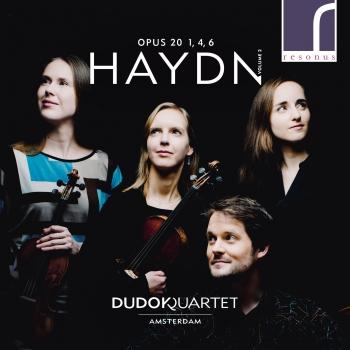 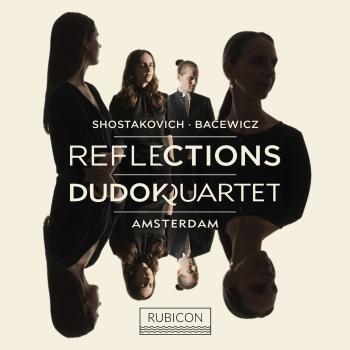 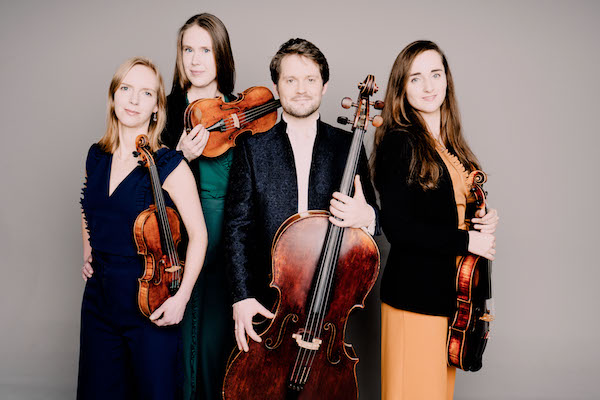 The Dudok Quartet Amsterdam
is one of the most versatile and appealing string quartets of this time. The quartet’s aim is to share the heart of music through captivating performances and an open approach of the audience.
In June of 2013, the Dudok Quartet Amsterdam has finished their studies at the Dutch String Quartet Academy with highest distinction. In November of 2014 the Dudok Quartet was awarded the Kersjesprize, an award annually given to an ensemble of exceptional talent in the Dutch chamber music scene. The quartet furthermore received top prizes in various international string quartet competitions in Bordeaux (Concours international quatuor à cordes), Weimar (Internationaler Joseph Joachim Kammermusikwettbewerb), The Netherlands (Charles Hennen Competition/Orlando Competition) and Poland (Radom first international string quartet competition)
The members of the quartet first met in the Ricciotti Ensemble, a Dutch street symphony orchestra. The ensemble was founded in 2009. During the first two years since then, the Dudok Quartet Amsterdam studied with the Alban Berg Quartett at the Hochschule für Musik in Cologne. After that, they studied with Marc Danel at the Dutch String Quartet Academy. Further important artistic impulses came from Eberhard Feltz, Peter Cropper (Lindsay Quartet), Luc-Marie Aguera (Quatuor Ysaÿe) and Stefan Metz.
Many well-known contemporary classical composers, such as Kaija Saariaho, Mark-Anthony Turnage, Calliope Tsoupaki and Max Knigge worked with the quartet on their music. In 2014, the Dudok Quartet Amsterdam has signed for several recordings with Resonus Classics, the world’s first solely digital classical music label. Both their first two albums, combining string quartet core repertoire by Haydn and Mozart with both string quartets by György Ligeti and world premieres of the ensembles own arrangements, have been received with unanimous praise in international press reviews including an Editor’s Choice in Gramophone magazine. 2016 saw the premiere of Kaija Saariaho’s opera Only the Sound remains, featuring the Dudok Quartet Amsterdam in a leading role accompanying the world-renowned countertenor Philippe Jaroussky.
The Dudok Quartet Amsterdam has performed with many renowned guest musicians such as recorder player Erik Bosgraaf, pianists Alexei Lubimov, Hannes Minnaar, Ralph van Raat and Daria van den Bercken, and cellists Pieter Wispelwey, Dmitri Ferschtman and Quirine Viersen. The Dudok Quartet Amsterdam performed at many prestigious festivals and venues throughout Europe and in the United States of America, such as the Grachten Festival, the Orlando Festival, Festival Quatuors à Bordeaux and Festival Jeunes Talents (France), Carinthischer Sommer and the Vienna Konzerthaus (Austria), Haydn Festival Fertöd (Hungary), Davos Festival (Switzerland), the Linari Classic Festival (Italy) and the Léon Chamber Music Festival and Festival Música en Segura (Spain), Winter Chamber Music Festival (Il, USA)
Willem Marinus Dudok (1884 – 1974) was a famous Dutch architect. He was also a great lover of music: he came from a musical family and composed music in his spare time. “I owe more to composers than I owe to any architect”, he wrote. “I feel deeply the common core of music and architecture: after all, they both derive their value from the right proportions.”