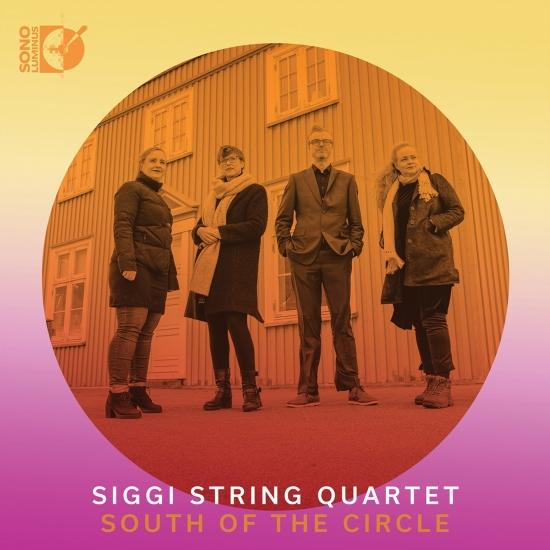 Info for South of the Circle

Siggi String Quartet was founded in 2012 during the Young Scandinavian Composers festival in Reykjavik. The quartet has actively collaborated with current composers and commissioned and premiered numerous works by various composers. The quartet’s repertoire extends from the renaissance through the classical masters and Siggi String Quartet four members have great passion for 20 and 21th century repertoire. “Experimenting with sound and texture, improvisation and life electronics is an important part of our work. It does deepen our understanding of the standard repertoire indirectly, and it goes both ways.”
Playing a late Beethoven parallel to working on Haukur Tómasson Serimonia makes us aim for rhythmical super-precision and working on Mamiko Dís Ragnarsdóttir Fair Flowers after performing the same Beethoven pushed us into the long phrases, picturing endless moss, grey and green and the tiny wild Icelandic flowers in bright violet and yellow. Una Sveinbjarnardóttir´s piece Opacity is more free, the structure is simple and the improvisando feeling is reigning.
Daníel Bjarnason wrote Stillshot in 2015. The piece is dreamy and nostalgic and in form resembles a chaconne, where the same chord progression repeats itself throughout. In the middle of the piece there is a retreat from the harmonic structure before it resumes the form until the end.
The composer describes the piece as depicting fragmented memories of a noblewoman. The recollections appear abruptly and vanish quickly, some of them distant but others more focused and clear. The title of the piece refers to the early days of photography where people would have to stay still for considerable time so the camera would produce a clear picture. Daníel Bjarnason’s music has been described as “coming eerily close to defining classical music’s undefinable brave new world” (Time Out New York)
”Opacity is an experiment where I wrote long, movement-long solos for each instrument of the Quartet. Solos in the String Quartet repertoire are traditionally short and travel between the voices quite frequently. Here I try to expand the idea of the individual solo and the result is Opacity, four columns representing each instruments of the String Quartet.”
First movement More belongs to the second violin. Next movement Opacity is a cello solo, the third Elegia a viola lament. Last movement Less is partly improvised by the first violin and craves reaction from the other three instruments in time and timelessness.
/ə(ʊ)ˈpasɪti/ noun: opacity.
Nebraska Quartet’ was commissioned by The Chiara String Quartet and premiered at Lincoln Center’s Merkin Concert Hall in New York City, January 2011. The piece also marked the first formal occasion where I was being asked to write a piece of concert music. Chiara was in residency at the University of Nebraska at the time, so I immediately had the idea to base the new piece on my imagined impressions of these faraway landscapes. Two pieces that I had written just prior as a part of my score for the film ‘Draumalandið’ (Dreamland) ‘Past Tundra’ and ‘Nowhere Land’ were arranged for the Chiara Quartet for the same concert. Both of whom deal explicitly with Iceland, and therefore I wanted the new piece to deal with my impressions of Nebraska. I began to draw parallels between geological and geographical properties of Iceland and Nebraska. And notwithstanding obvious contrasts, these sparsely populated, erosive lands share a sense of isolation and timelessness, and vast open spaces. ‘Nebraska Quartet’ is in four movements: i. Flat Water, ii. Landlocked, iii. Erosion, iv. Plainsong.
Siggi String Quartet:
Una Sveinbjarnardóttir, violin
Helga Þóra Björgvinsdóttir, violin
Þórunn Ósk Marínósdóttir, viola
Sigurður Bjarki Gunnarsson, cello

Booklet for South of the Circle