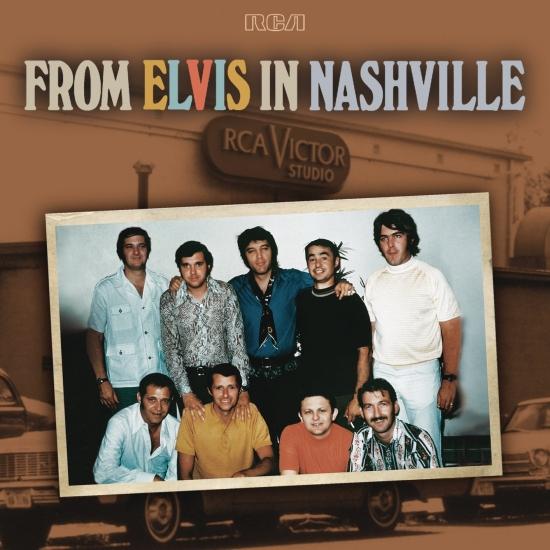 Info for From Elvis In Nashville (Remastered)

Legendary sessions newly mixed and remastered! The King’s first recordings of the 1970s saw him cut loose live in the studio with a band in sync with his sensibility. Recorded live in RCA’s Studio B in Nashville over the course of a five day/night run in June (there was also an additional session on 22 September), Elvis’ performances from those sessions formed the core of the albums Elvis: That’s the Way It Is, Elvis Country (I’m 10,000 Years Old) and Love Letters from Elvis.
Now, for the first time, the master recordings from the 1970 Studio B sessions may be enjoyed together as a single official Presley album. On From Elvis In Nashville, Presley’s studio tracks from the 1970 marathon sessions are presented in pristine audio, newly mixed by acclaimed engineer Matt Ross-Spring (John Prine, Jason Isbell) without the added overdubs or orchestration appearing on earlier releases.
At the close of the 1960s, Presley, the atomic-powered singer of the 1950s, put his stamp on the rock revolution decade, reestablishing himself as a musical and cultural force to be reckoned with. His electrifying Elvis ’68 Comeback Special made television history and his long-awaited return to non-soundtrack recordings–captured at Chip Moman’s American Sound Studio in Memphis, January-February 1969–yielded major chart hits including “In The Ghetto,” “Don’t Cry Daddy,” “Kentucky Rain,” and “Suspicious Minds” (Elvis’ final No. 1 single) and well as a pair of acclaimed 1969 album releases, From Elvis In Memphis and the studio/concert hybrid From Memphis to Vegas/From Vegas to Memphis. From Elvis In Nashville serves as a mirror and companion to his earlier Memphis recordings, bringing fresh fire, exuberance, humor and emotional resonance to the Studio B sessions.
Elvis Presley
Digitally remastered

From Elvis In Nashville (Remastered)

A Date With Elvis (Mono Remastered)

Back In Memphis (Remastered)

Where No One Stands Alone (Remastered)

Christmas with Elvis and the Royal Philharmonic Orchestra (Deluxe)

Christmas with Elvis and the Royal Philharmonic Orchestra

From Memphis to Vegas / From Vegas to Memphis Live (Remastered)

From Elvis In Memphis

How Great Thou Art

Way Down in the Jungle Room (Remastered)