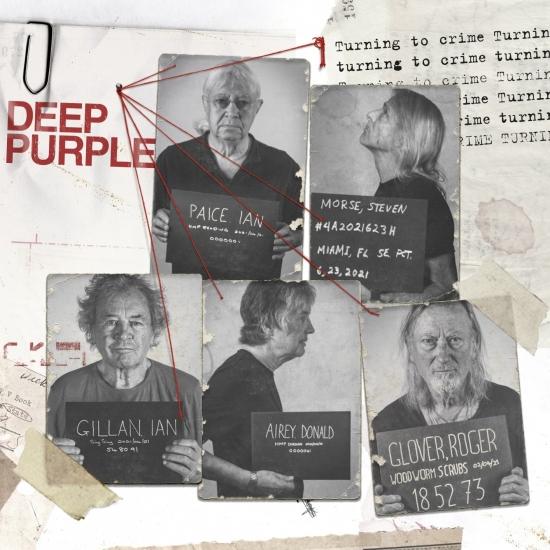 Info for Turning to Crime

With strong tailwind from last year’s chart leading album “Whoosh!”, DEEP PURPLE surprises with new album “TURNING TO CRIME” and new single “7 And 7 Is”.
The new album, released by earMUSIC, will reach the worldwide community of Deep Purple loyal fans only 15 months after Deep Purple‘s latest studio album “Whoosh!”, an album saluted by prestigious chart achievements (3rd consecutive #1 in Germany, as well as well as #4 in the UK) and acclaimed by critics who praised the creative strength of a band that continues evolving with every release.
“Turning to Crime” is the first studio album by Deep Purple entirely made of songs not written by the band and previously recorded by other artists. The “time trilogy”, consisting of “NOW What?!”, “inFinite” and “Whoosh!” (2013, 2017 and 2020) has sold over 1 million albums, topped the charts 11 times and achieved more than 40 Top 10 positions worldwide.
Producer and friend Bob Ezrin assigned each band member a few of the selected songs to arrange. No one knew what the other band members were creating, how they arranged the first demos, until the results were shared. They all became co-producers of “their songs”, and once everybody else joined, it all turned into DEEP PURPLE songs.
The recording process should not make us misunderstand the true nature of this album: this is handmade music, this is “real” as it’s always been with every DEEP PURPLE album. When DEEP PURPLE are recording, they play together their songs from start to finish. They made no exception on this record. The only difference is that they played their instruments and their parts on their own, having to “imagine” what the others would play – in a way, as it happens when they were improvising on stage.
Despite the recording of this album relied a lot on today’s technology, the band resisted abusing the possibilities offered by today’s recording techniques by re-recording certain passages again and again. DEEP PURPLE is not cut and paste rock and roll! This makes them different from a lot of music that is currently recorded.
So, the “fun experiment” turned into something that galvanized them and that shaped quickly into a real piece of art. “TURNING TO CRIME” is Deep Purple enjoying playing music without commercial plans nor losing their edge and drive. This is DEEP PURPLE coming full circle.
Ian Gillan, vocals
Roger Glover, bass
Don Airey, keyboards
Ian Paice, drums
Steve Morse, guitar