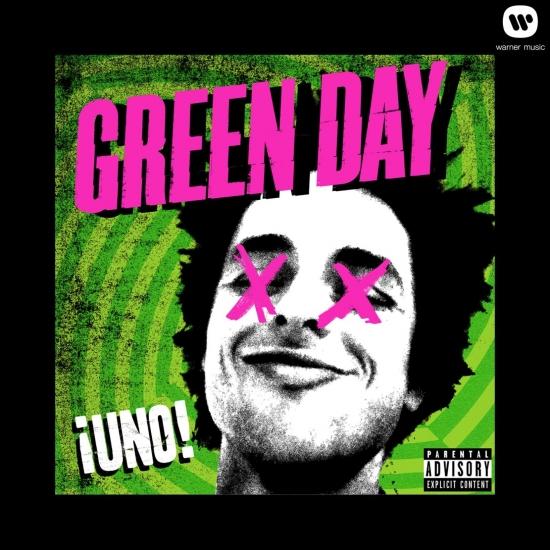 Just when you thought Green Day didn't make albums like this anymore – 12 blasts of hook-savvy mosh-pit pop, cut hot and simple with no operatic agenda – singer-guitarist Billie Joe Armstrong, bassist Mike Dirnt and drummer Tré Cool do three at once and issue them in rapid-fire installments. It's lunacy, of course, in what now passes for the music business.
In fact, Green Day's triple play with longtime co-producer Rob Cavallo is the way things used to be. In 1964 alone, the Beatles put out two albums, three singles and two EPs in Britain; the next year, the Rolling Stones whipped out five singles and three LPs in the U.S. ¡Uno! is Green Day's first studio album in three years, but they deliver it like late-breaking news, with mid-Sixties-guitar clamor, '77 velocity and no breathing room. Every track is written like a single – the glam-Jam jolt of 'Nuclear Family,' the Cheap Trick-style zoom and vocal sunshine of 'Fell for You' – then thrown at you like a grenade. From what I've heard so far of ¡Dos! and ¡Tré!, the same goes for them too.
After the Quadrophenia-like weight and worry of 2004's American Idiot and 2009's 21st Century Breakdown, ¡Uno! feels like plain relief. There are strong whiffs of Green Day's biggest seller, 1994's Dookie, in the honed buzz of Armstrong's and Jason White's guitars, Dirnt and Cool's airtight gallop, and Armstrong's lyric emphasis on girl troubles and starting the party that never stops. There is also a hipper, richer grip in the details. The martial clip of 'Carpe Diem' is an exuberant throwback to the Mod-era Who. 'Troublemaker' jumps like a dirty-glitter union of U2's 'Vertigo' and the Knack's 'My Sharona,' and has a liquid-fuzz guitar break that starts like the drone in David Bowie's 'Heroes' and ends with a vicious tremolo-bar spasm, as if Jeff Beck has taken over straight from the Yardbirds.
'Stay the Night' and 'Let Yourself Go' are the kind of pop-smart here's-my-fucking-problem miniatures Armstrong was writing like second nature when he, Dirnt and Cool were too young to drink (legally) where they gigged. But Armstrong is 40 now, married and a dad, and a lot of this ruckus sounds designed to drown out the time bombs ticking in his head and the maddening static outside. In 'Kill the DJ,' Armstrong turns the avenging spirit of the Smiths' 'Panic' ('Hang the DJ') on the noxious vapors of rabid talk radio, with more Taxi Driver in his threats and a catchy echo of the Clash's 'The Magnificent Seven' in the charge. Despite the jolt of Slade in the chorus, 'Loss of Control' isn't about sucking up every drop at the bar. It's a lonesome fury, spit out by a guy stranded in righteousness and stung by the betrayal. 'Hey, isn't that old what's-his-face/That I see walking down the street,' Armstrong sneers. 'We never had anything in common/And I never liked you anyway.'
'Where the hell is the old gang at?' Armstrong sings to the void in 'Rusty James.' Unlike most adult punks, though, he still has his original sidekicks, and their band in a new peak form. The action continues with ¡Dos! in November. Seven weeks with ¡Uno! will leave you in shape, and hungry, by then. (David Fricke, Rolling Stone)