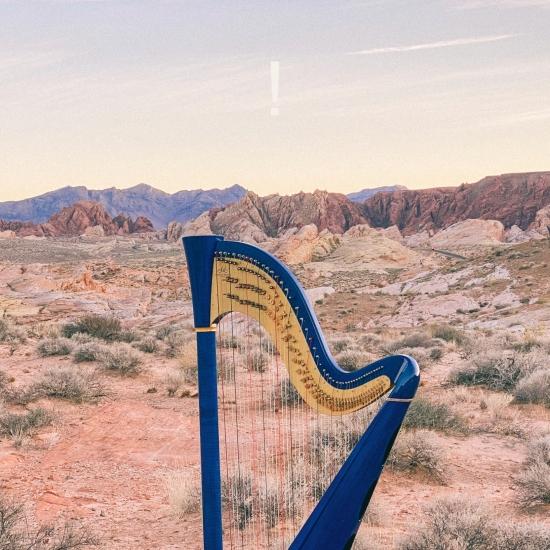 Lara Somogyi builds a new creative sound world based around the harp, its expressive capabilities and electronics, which is the result of a decade’s long dive into sonic exploration. “Every single sound you hear on the album comes directly from the harp,” explained Somogyi. “I wanted to express everything this instrument can do.”
On her album Lara Somogyi changes people’s perspective of the harp, transforming the worlds that it operates within, and bringing in electronic sounds with an array of guitar pedals and loops. She noted, “The exclamation of the album’s name is to me a change of tone. A change of expression.”
In addition to being a composer-performer Lara Somogyi is also an active session harpist. She is featured on Bonobo’s seventh studio album Fragments and the Ben Lukas Boysen’s Spells record with Erased Tapes. Somogyi was also specifically requested to explore and record harp textures for Hans Zimmer’s Blue Planet II soundtrack featuring Radiohead, as well as a number of film soundtracks (including The Lion King).
Born in Hawaii to Hungarian parents, Somogyi’s introduction to harp-playing more-often walked a traditional route. She leaned into an improv-approach while studying at the prestigious Royal Academy of Music – composing to colour schemes and writing to televisuals.
For Somogyi, the deep desire for experimenting came to life after a handful of chance meetings with Brian Eno, the super-producer behind landmark albums by David Bowie, Coldplay and U2, and the name associated with creating the ambient music genre with his Music For Airports album. The two first crossed paths whilst Somogyi was working as a receptionist, in between studies, at Eno’s gym. At this time, Eno’s profound impact unleashed an extra sensory layer within Somogyi’s creative approach.
“He’d come in with various things to explain and they were all to do with using your senses,” she says. “He’d say ‘Hey, I need you to look at and then experience something.”
Three particular encounters stood out to Somogyi. First: a beautiful rose – an unbelievable looking deep burgundy rose – from somewhere outside in Notting Hill. Eno asked the staff, including Somogyi, to look at the flower outside in the light. Somogyi notes that, “Taking that moment to interpret the burgundy colour as a sensory experience – his insistence on truly seeing it – was impactful.”
Continuing to explore this newly innovative musical facet, Somogyi reflects on a particularly poignant bird call, “Eno wanted to see if I could identify the tremors, cadences, things like that.” This was followed by the unbelievable sensory opportunities found in a perfume and the ability to find notes in the smell. It was experiences like these that allowed Somogyi to be incredibly present within her practice, and to weave creativity into all the senses. “I had an awakening to the fact there are tonnes of ways you can feel, hear, touch, smell.” So, in came the harp. “Shouting into the soundboard creates a choir. Your feet manipulate the pedals. You can use a space echo and have the instrument sound like it’s in a massive hall.”
From this sensory-led approach came road-opening questions. Like: “How does it feel when I pluck the strings with this part of the finger? How does it feel when I go up to the top of the strings? How is the resonance different to playing the mid-strings, closer to the soundboard?”
Work on ’!’ began three years ago, with recording taking place in Somogyi’s home studio in Los Angeles, alongside producer Cyrus Reynolds, who co-composed the album.
“We’d tackle piece by piece. Sometimes the songs would come from a structured and composed piece. Other times it would be improvisatory and chopped up later. Because the harp is vast and luscious, I love exploring the angular and more expressive types of playing.”
This direction means that ‘!’ revolves around hyper-creative deviations from traditional harp techniques. Somogyi put blu-tack onto the strings. She used a bow. In one instance, a milk frother is used. There are deep layers of texture across ‘!’, manipulating the harp into new frontiers. Think of it like a journey. Moving from trance-like strings on album opener “åcceptances”, through to glitched-out patterns on a later track like “Avery”, ‘!’ bridges the gap between the electronic and classical worlds with ease and brings many of the senses into play.
This all goes back to the fact this album is about shifting people’s perspective of the harp, changing the worlds that it operates within, and bringing in electronic sounds. The all-encompassing soundscape that Somogyi has developed utilises the harp’s full capabilities alongside an array of guitar pedals and loops. As Somogyi puts it, “The exclamation of the album’s name is to me a change of tone. A change of expression.”
Lara Somogyi 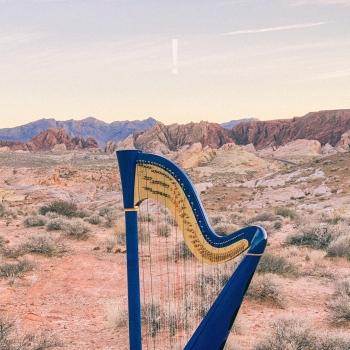 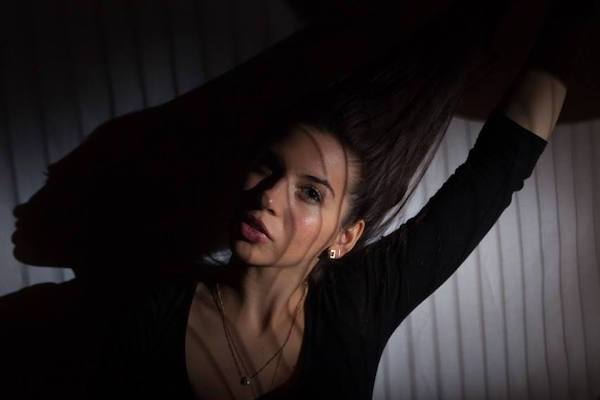 Lara Somogyi
is a Los Angeles based harpist and contemporary classical performer-composer. Known for her work with electronics and pedal fx her work is focused on forging a new artistic identity for the harp.
Born and raised in Kauai, Hawaii and New York, Lara is a graduate from the Royal Academy of Music in London, and in 2018 was awarded as an honorary Associate of the Royal Academy of Music (ARAM) for her contributions to her field.
In addition to being a composer-performer, she is also an active session harpist - recording in a wide range of genres for Film and TV from sessions with the London Symphony Orchestra to Rufus Wainwright and Bonobo. Lara is also called upon for her unique combination of electroacoustic harp and fx pedals as well as her improvisation and compositional arrangements in sessions as well as a live performer.
Cultivating an individual sound for the harp - she brings a fresh, passionate, modern sonority to the instrument. She was recently brought in specifically for her sound to record & explore harp textures and fx for the score to Blue Planet II by Hans Zimmer & Jacob Shea, featuring Radiohead. Her signature use of electronics and harp is heavily featured on the score. She also worked one on one with composers Mark Isham & Isa Machine (from Florence and the Machine) on the Hulu show “Little Fires Everywhere” where they brought her on to record with her unique approach to the way the harp is used and heard. She can be heard all over the score sculpting the sonic landscape with harp.
She has also featured as harp soloist on Hans Zimmer’s score for Disney’s The Lion King, Kris Bowers’ score for Greenbook, Netflix’s Bridgerton, King Richard, When They See Us, Space Jam 2 and Hulu’s Mrs. America, Rob Simonsen’s score for Tully, Bleeding Finger’s The Simpsons and Nat Geo Being the Queen, Jasha Klebe’s score for Netflix’s Animals, Black Godfather, Brian Tyler’s Charlie’s Angels, Spike Lee’s film with Oscar Nominated score Da 5 Bloods by Terence Blanchard, Daniel Pemberton’s Marvel film Birds of Prey, and Jermaine Stegall’s score for Coming 2 America.
She recently performed in the 2019 Los Angeles Philharmonic’s Noon til Midnight festival at the Walt Disney Concert Hall premiering a piece commissioned by the LA Philharmonic by Tuvio Tulev with contemporary vocal ensemble “The Crossing”.
Years of sculpting her sound and developing her set of contemporary expressions on the harp, led her to write compositions for solo harp and electronics. Finding company and comfort in vast sonic expanses and exploration, ushered her to a renewed clarity of expression and identity with the instrument. In 2019 Lara premiered four of her solo harp compositions with Orchestra: “…Self.Seed…” and “Acceptances” written for harp, fx pedals, electronics and Orchestra with Symphony21 and her compositions “hundred00” and “Llodges” written for harp, fx pedals, and Orchestra with Sonic Open Orchestra in Los Angeles.
In addition to Film and composition, she also collaborates with other artists on their records. Recently, she was brought on board to work with neo-classical label Erased Tapes where she is featured on Ben Lukas Boysen’s album “Spells” with Nils Frahm. She is also featured throughout Bonobo’s upcoming record.
In addition, Lara has recently recorded and performed live with Anderson. Paak, Ms. Lauryn Hill, Ariana Grande, H.E.R. John Legend, Camila Cabello, Kelly Clarkson, Bazzi, Ashanti, Kiana Ledé, Madison Beer, Melanie Martinez, We Are King, Billy Idol, Josh Groban, Sarah Brightman, and with Rufus Wainwright on Guy Chambers’ Secrets of a Pop Song on BBC.
Lara’s compositions and live performances have been featured in Spitfire Audio "One's to Watch," Roland Sessions, Lionsgate’s film Public Disturbance, and is a featured performer at Google X for their women in technology and innovation initiative.