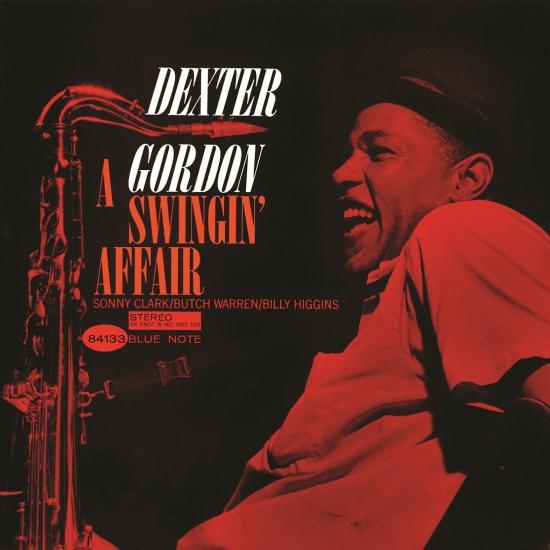 Info for A Swingin' Affair

Like his other Blue Note dates of the period, Dexter Gordon's A Swingin' Affair captures the saxophonist in his prime. Recorded a mere two days after his popular GO! with the same quartet, the album features Gordon's supple, smooth lines radiating with brilliance over the gentle finesse of Sonny Clark (piano), Butch Warren (bass) and Billy Higgins (drums). His improvisations are full of life, always with a touch of the blues, and constantly swinging. The result is a clear portrait of a jazz master in his element.
Gordon's far-off cry of "Soy Califa" kicks off the opener as Higgins' calypso bounce supports the leader's cheerful melody. Billie Holiday's classic "Don't Explain" is given a slow, smoky atmosphere where Gordon's velvety tones hang in the air like a whispering fog. The rhumba/swing combination of the standard "You Stepped Out Of A Dream" is a peppy jaunt and a standout performance. Bassist Warren's "The Backbone" starts with a bluesy bass and tenor melody that gives way to a full-out swinging jam. Finally, the classic ballad "Until The Real Thing Comes Along" provides an easy change of pace before the ending romp of Gordon's own "McSplivens."
„Dexter Gordon was on a roll in 1962 when he recorded A Swingin' Affair. Two days earlier he and this same quartet recorded his classic album Go!; the band included pianist Sonny Clark, bassist Butch Warren, and drummer Billy Higgins. Gordon wrote two of the set's six tunes, the first of which, the Afro-Cuban-flavored "Soy Califa," is a burner. Higgins' drumming double-times the band as Gordon lays out the melody -- even his solo doesn't stray far from it and he returns to it repetitively. Clark vamps with beautiful minor-key chords that he then adds to his own solo, moving all around the lyric with his right hand. And Higgins and Warren are truly wonderful on this one. There are also three standards here. Gordon was always a master of them because his own approach to improvisation was essentially one of melodic invention. "Don't Explain" is ushered in by Clark stating the changes; Gordon's low and slow playing is romantic and sensual. On "You Stepped Out of a Dream," Gordon and Clark take the melody and invert it in the bridge; they turn it into a kind of groove as Higgins plays Latin-tinged rhythms throughout. Warren's "The Backbone" is a hard bop groover with a bossa nova flavor, as he and Gordon twin on the tune's head before Dex moves off into his solo. It's easily the best thing here. This is a hot hard bop band, playing a program that's relaxed and mostly upbeat; they even manage to stretch a bit. The Rudy Van Gelder Edition features fine sound but no bonus material.“ (Thom Jurek, AMG)
Dexter Gordon, tenor saxophone
Sonny Clark, piano
Butch Warren, bass
Billy Higgins, drums
Recorded on August 29, 1962 at Van Gelder Studio, Englewood Cliffs, NJ
Engineer by Rudy Van Gelder
Produced by Alfred Lion
Digitally remastered