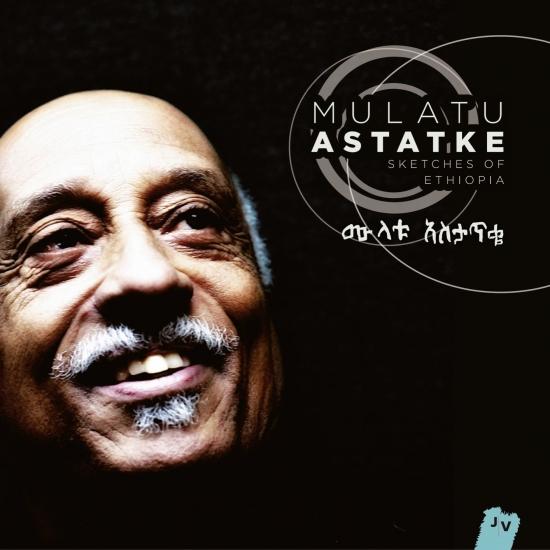 Info for Sketches of Ethiopia

Mulatu Astatke, on his first album for Jazz Village, bears witness to an extraordinarily rich career, that has seen him hailed as the father of Ethio-jazz. From his musical studies at Trinity College, London, and Berklee College of Music, Boston, through groundbreaking recordings for the legendary Amha label during Addis Ababa s musical golden age, to his contribution to the Jim Jarmush film Broken Flowers which assured him of cult status amongst savvy music fans, Astatke has a unique musical history. His new album, Sketches of Ethiopia, brings to mind the great arrangements of Gil Evans and late Ellingtonian tone poems and is an homage to the rhythms and dances of Mulatu s homeland that still provide the engine for his music. It also demonstrates that the grand old man of Ethio-jazz is not standing still. Still finding new ways to express his music, he s brought together a top team of the UK s young jazz talent, some of the finest new Ethiopian voices and the unique vocal talents of Malian diva Fatoumata Diawara to create the strongest album of his late flowering.
„Sketches Of Ethiopia is more than a reminder of [Mulatu s] core talents it s a new and exciting exploration, another phase in a career that seems to have plenty of twists and turns left in it.“ (MusicOMH)
„…a thrilling cross-cultural collision of jazz, percussion-oriented African music and edgy, fusionesque funk.“ (Mojo 4 Stars)
„…this excellent album is a journey into the varied styles of Ethiopian music, filtered through his jazz sensibility.“ (Simon Broughton)
„Each track here is a distinctive entity which contributes to a cohesive funky whole. It s impossible to pick a favourite but Surma , featuring Malian diva Fatoumata Diawara, is an assertively sensuous gem.“ (The Independent, UK)
Mulatu Astatke, vibraphone, piano, keyboards
Yohanes Afwork, washint
James Arben, flute, oboe, tenor saxophone, clarinet
Messale Asmamow, krar
Richard Olatunde Baker, percussion
John Edwards, double bass, bass
Indris Hassun, masinko
Alexander Hawkins, piano, keyboards
Danny Keane, keyboards, cello
Tom Skinner, drums
Tesfaye, lead vocals (on tracks 2, 4, 6)
Byron Wallen, trumpet
Additional musicians:
Fatoumata Diawara, lead vocals (on track 8)
Francois Cordas, tenor saxophone (on track 5)
Kandia Kora, kora (on tracks 2, 4, 7)
Eric Longsworth, cello (on track 5)
Jean-Baptiste Saint-Martin, guitar (on tracks 2, 5, 6)
Francois Verly, percussion (on tracks 2-8)
Memeru, choir leader 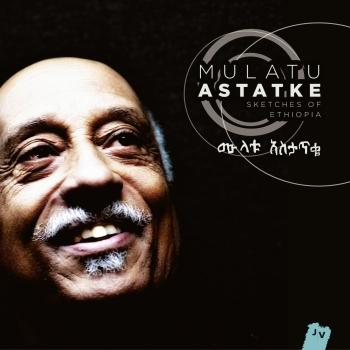 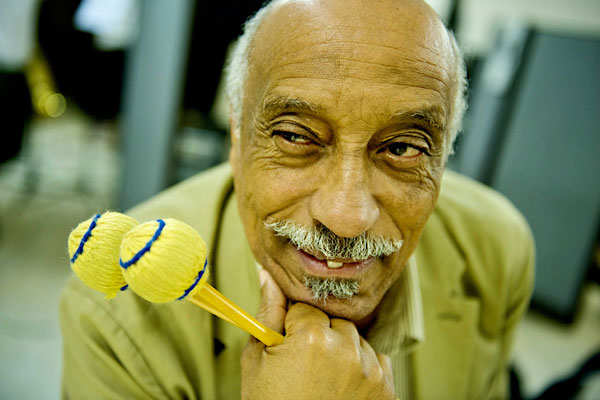 Mulatu Astatke
is one of Ethiopia's major musicians. In the late 1950s, he travelled to London, and later Boston and New York, absorbing jazz and Latin music, recording several LPs (one of which, Mulatu of Ethiopia, has become a legend among DJs in recent years), and eventually bringing both modern jazz and Latin influences and specific instruments back home to Addis Ababa. On piano, organ, vibes and percussion, with his arrangements and compositions, and as an agent provocateur, he became a pivotal figure in a great era of Ethiopian pop and jazz, from 1968 to 1974. To this day, he remains a ubiquitous presence in the Ethiopian music scene, as club owner, music school founder, radio DJ, composer, arranger and instrumentalist.
The Either/Orchestra is among the longest running and most important large ensembles in jazz. Since 1985, under the direction of founding saxophonist/composer Russ Gershon, the ten-piece group has traversed the history and stylistic range of jazz to make great music out of unexpected connections between styles and approaches to music. Like the late Art Blakey's Jazz Messengers, the E/O has been a kind of graduate school of jazz, whose alumni include John Medeski, Matt Wilson, Josh Roseman and Miguel Zenon, among dozens of other significant players. In 1997, inspired by the work of Mulatu Astatke among others, the E/O began playing their own arrangements of Ethiopian popular music, which garnered them an appearance at the Ethiopian Music Festival in Addis Ababa in January 2004, the first Americans ever invited. In Addis, the group met Mulatu and invited him to play on their concert, with results that surprised and delighted the audience and critics. Since that time, the E/O and Mulatu have performed together in the UK, Holland, Sweden, Finland, Germany, Canada and the US.

Booklet for Sketches of Ethiopia