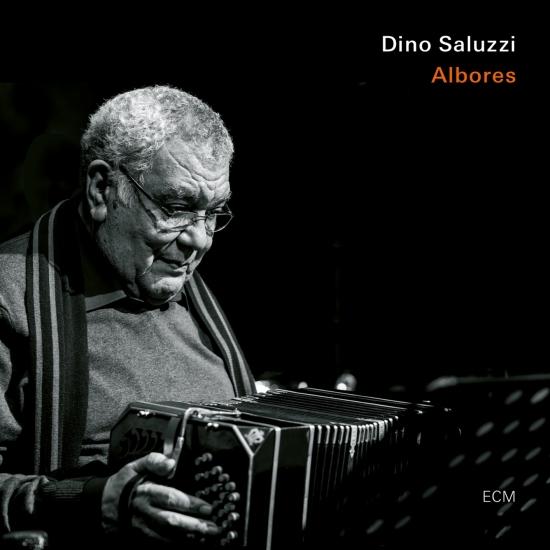 An album of soliloquies from the master. After highly acclaimed albums in formations from duo and trio to family band and orchestra, here is the great Argentinean bandoneon player Dino Saluzzi in his first purely solo recording in more than 30 years. (The early solo albums Kultrum and Andina established his reputation outside his homeland). Recorded in the Saluzzi Music Studio in Buenos Aires between February and June 2019, it is a powerful reminder of Dino’s gifts as a musical storyteller of great subtlety. His pieces, in this intimate recording, reach back to early memories; “Don Caye”, subtitled “Variations on the work of Cayetano Saluzzi”, is a most touching dedication to Dino’s father. Throughout, the bandoneonist reflects upon the fleeting passage of time, instrument and performer breathing as one.
Recorded in Buenos Aires last year, Albores [Dawn] is among Dino Saluzzi’s most intimate albums, featuring the great Argentine bandoneonist alone with the instrument that has been his constant companion since childhood.
ECM has documented Saluzzi’s work in many different creative contexts over the years, but it was as a solo performer that he made his first major statement for the label, with Kultrum (recorded 1982) and then Andina (1988). His bandoneon soliloquies hold a special fascination. To hear Dino playing solo is to hear him thinking aloud, in music that traces aspects of a long life and reflects upon friendships and on spiritual matters, drawing inspiration from the arts and from everyday reality. Like one of his permanent references, Jorge Luis Borges, Saluzzi combines memories, meditations, and imaginative flights in the creation of his own world. “Albores is the outcome of more than six decades of understanding music as the product of reason and discernment,” writes Luján Baudino in the liner notes, “the act of capturing feelings in the depth of the soul.”
Often characterised as a “storytelling” musician, Saluzzi’s tales are multi-layered and allusive. The album opens with “Adiós Maestro Kancheli”, a tribute to the Georgian composer Giya Kancheli, who died in 2019. Saluzzi played some of Kancheli’s melodies on the album Themes from the Songbook, recorded in 2010. In his prayerful homage on Albores, Saluzzi alludes to Andean music, a long way from the Caucasus Mountains, perhaps recognising a common bond with another composer whose natural habitat was not the conservatory.
For his part, Saluzzi often refers, in his music, to the small villages of his childhood and to the working-class neighbourhoods of Buenos Aires in its golden age. He’s a poet of both the streets and the countryside. “Intimo” paints a picture of “spring reflected in the lights of a yesteryear Buenos Aires.” In “Don Caye - Variaciones sobre obra de Cayetano Saluzzi” he recalls the sounds of his father’s music, the sounds that launched Dino on his long journey. As Dino has said: “We didn’t get any information through the radio or through albums, and there wasn’t any knowledge of academic music or symphonic music or formal concerts when I was very young. But still my father was able to transmit a musical education to me.”
In “La Cruz del Sur” Saluzzi draws upon what Lújan Baudino calls “the ancestral sound”: “The tune expresses the sorrow characteristic from the history of Latin America. It permeates Saluzzi’s sound so that he remains mindful of his origins.”
Dino Saluzzi, bandoneon 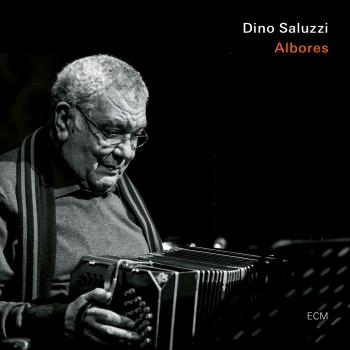