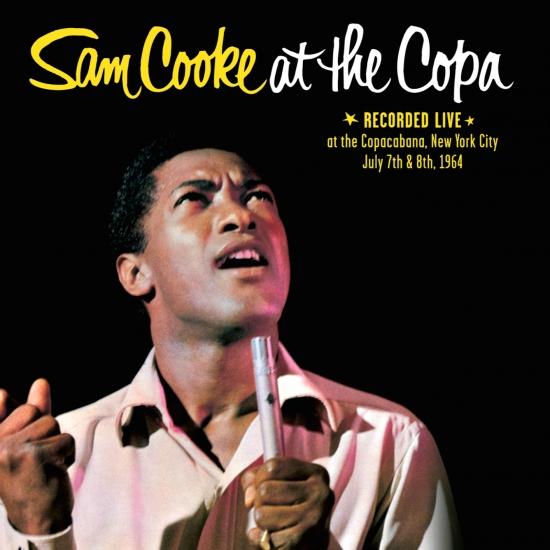 Info for Sam Cooke At The Copa - Live (Remastered)

In 1964, when this concert at New York City's legendary Copacabana night club was recorded, Sam Cooke was at the top of his game, having charted numerous times with his unique blend of pop and soul. The success doesn't seem to have gone to his head, though: he sounds relaxed and conversational throughout this intimate performance.
Accompanied by a band that includes Bobby Womack on guitar, Cooke brings his R&B tendencies further to the fore than on his immaculately produced studio work. He moves deftly through his own hits, like 'You Send Me' and 'Twistin' The Night Away,' but it's on the folk songs 'If I Had A Hammer' and 'Blowin' In The Wind' that he really stretches out, proving himself a gifted interpreter unbound by stylistic constrictions.
„Sam Cooke At The Copa“ is an essential part of the Cooke canon.
Sam Cooke, vocals
Clif White, guitar
Clifford White, guitar
Bobby Womack, guitar
John Altman, flute, clarinet, saxophone
Joseph Foglia, flute, saxophone
Tony Ferina, clarinet, saxophone
William McLeish Smith, clarinet, saxophone
George Barrow, clarinet, saxophone
Clyde Reasinger, trumpet
George Triffon, trumpet
Alfred Cobbs, trombone
Ronald Plumby, trombone
Dicky Harris, trombone
Bart Varsalona, trombone
Albert 'Gentleman June' Gardner, drums
Sticks Evans, percussion
Recorded live at the Copacabana, New York City, July 8, 1964
Digitally remastered from original master recordings

Tribute To The Lady (Remastered)

My Kind Of Blues

Sam Cooke
the son of Reverend Charles Cook, Sr., (a Baptist minister) and Annie May Cook was born January 22, 1931 in Clarksdale, Mississippi. The family moved to Chicago, Illinois, in 1933. He had four brothers and three sisters – Willie, Charles Jr., L.C., David, Mary, Hattie and Agnes.
Sam graduated from Wendell Phillips High School in 1948, where he distinguished himself as an “A” student as well as being voted “most likely to succeed.” During his formative years, Sam, together with his brothers Charles Jr., L.C. and sisters Mary and Hattie, performed as a gospel group “The Singing Children.”
At the age of 15, Sam became lead singer of the famous “teenage” gospel group the “Highway QC’s” until he was 19 when he was hand-picked by Roy (S.R.) Crain, manager of the “Soul Stirrers,” to replace the legendary R.H. Harris as lead singer.
In 1951, with the “Soul Stirrers,” he began his writing and recording career on Specialty Records with such gospel classics as “Nearer To Thee,” “Touch The Hem Of His Garment” and “Be With Me Jesus.” For six electrifying years he established a new standard for gospel expression.
“It isn’t what you sing that is so important,” said Sam’s father, “but rather the fact that God gave you a good voice to use. He must want you to make people happy by singing, so go ahead and do so.”
With these words of encouragement, he did just that. At the height of his fame in the gospel world and with the screams of believers raising him up and being raised by him, Sam left it all behind.
In June of 1957 he left Specialty Records, along with his producer/manager Bumps Blackwell, and three months later signed with Keen Records where he wrote and recorded such Number 1 hits as “You Send Me,” “Win Your Love For Me,” “Everybody Loves To Cha Cha Cha,” “Only Sixteen” and “(What A) Wonderful World.” Sam didn’t “cross-over” he “combined” – blending sensuality and spirituality, sophistication and soul.
After the success of “You Send Me” in 1957, Sam signed with the William Morris Agency, appeared on The Ed Sullivan Show and performed at New York City’s world famous Copacabana in March of 1958.
In 1959, Sam married Barbara Campbell, his childhood sweetheart, at her Grandmother’s house in Chicago, with his father performing the ceremony. They had two daughters – Linda and Tracey and a son, Vincent, who, in 1963, died tragically at the age of eighteen months. Sam also became partners in 1959 with J.W. Alexander in Kags Music (now ABKCO Music, Inc.) and later that year, with J.W., Sam formed SAR Records (now ABKCO Records). Kags Music would control not only Sam’s 152 classic compositions, but also the compositions written by artists signed to SAR.
In 1960, Sam signed with RCA Records, a deal negotiated by The William Morris Agency, where he continued to write and record such Number 1 hits as “Chain Gang,” “Twisting The Night Away,” “Bring It On Home To Me,” “Having A Party” and “Cupid.”
In 1963, J.W. and Sam appointed Allen Klein to manage SAR, Kags and all of the related companies; at the same time Allen became Sam’s manager. On September 1st of the same year, Sam signed a new agreement whereby all of his RCA business would pass through Sam’s record label, Tracey Records. RCA was now merely Tracey Records’ distributor. This new deal guaranteed Sam a minimum advance of half a million dollars over three years and established Sam’s complete ownership of his work. Everything he did from this point on would be by his own design and direction, and in fact even RCA’s distribution rights of the Tracey material were limited to 30 years from the term of the agreement.
Before producing his good friend Cassius Clay’s (Muhammad Ali) recording titled “The Gang’s All Here,” he and Malcolm X attended Clay’s heavyweight championship bout with Sonny Liston in Miami.
Sam died on December 11, 1964. “At the Mount Sinai Baptist Church in Los Angeles, a crowd of 5,000 persons, some of whom arrived five hours before the scheduled last rites, over-ran facilities designed to accommodate 1,500. In an emotion packed atmosphere, super charged by the singing of Lou Rawls, Bobby Blue Bland and Arthur Lee Simpkins, women fainted, tears ran down men’s cheeks and onlookers shouted. Gospel singer Bessy Griffin, who was to appear on the funeral program, became so grief stricken she had to be carried off. Ray Charles stepped in from the audience to sing and play ‘Angels Keep Watching Over Me’.” EBONY Magazine February 1965
For 14 years Sam sanctified and glorified his gospel heritage and forged new paths by being the first black artist to establish his own record company (SAR) where he helped such gospel oriented artists as the Womack Brothers (Bobby, Cecil, Friendly Jr., Curtis and Harry) who later became the Valentinos, R.H. Harris & His Gospel Paraders, The Simms Twins, Johnnie Morisette, Johnnie Taylor and Billy Preston, as well as giving continued expression to the Soul Stirrers.
Today, many years after he began his writing and recording career, Sam’s music endures with cover recordings by artists from all genres of the recording industry such as Aretha, Bryan Adams, Gerald Alston, The Animals, Arcade Fire, The Band, Billy Bragg, Solomon Burke, Jimmy Buffet, Eric Clapton, Shemekia Copeland, Jim Croce, Terrence Trent D’Arby, Gavin DeGraw, Bob Dylan, The Fugees, Art Garfunkel, Al Green, Leela James, Jon Bon Jovi, R. Kelly, John Lennon, Paul McCartney, Nas, The Neville Brothers, Otis Redding, The Righteous Brothers, The Rolling Stones, Seal, Dan Seals, Nina Simone, The Spinners, Cat Stevens, Rod Stewart, The Supremes, James Taylor, Tina Turner, Luther Vandross, Jackie Wilson, Bobby Womack and Ray Charles, among many others. (Source: http://www.abkco.com)