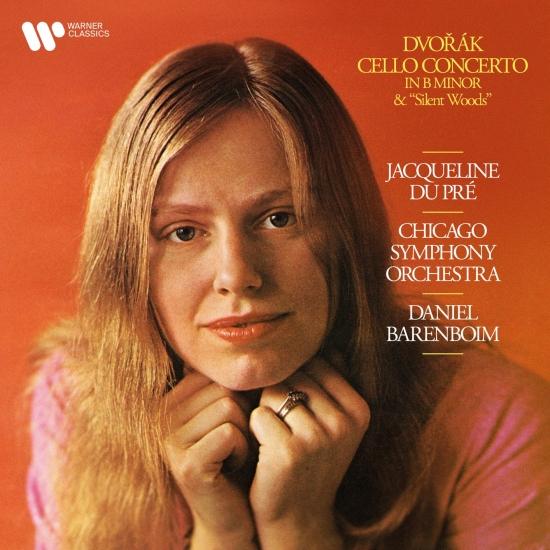 Cellist Jacqueline du Pre is joined by the Chicago Symphony Orchestra conducted by Daniel Barenboim for this 1970 recording of Dvorak’s Cello Concerto in B minor, Op. 104. At a young age, cellist Jacqueline du Pre achieved mainstream popularity. She is regarded as one of the most distinctive cellists of the last half of the 20th century. Her career was cut short by a diagnosis of multiple sclerosis which stopped her performances at the age of 27. This release was recorded November 11, 1970 at the Medinah Temple in Chicago du Pre and contains Dvorak’s 3 movements: Allegro, Adagio ma non troppo and Finale: Allegro Moderato as well as the additional piece of music Silent Woods, Op. 68.
The story of the “golden couple” of the classical music scene of the sixties is well documented. Jacqueline Du Pre and Daniel Barenboim met at a London party in December, 1966. When other guests bid farewells, the two sat down and played Brahms. They married in June, 1967. She was 22, he was 25. Speaking of his wife, Barenboim once commented that, “It doesn’t dawn on her sometimes that we mortals have a difficult time following her.”
That marriage began to unravel in the eighties when Du Pre was diagnosed with multiple sclerosis in 1971, one of the most damning illnesses a cellist can have. Subsequent concerts and recordings bore witness to the decline in her ability to play; this recording is the last testament of the Du Pre legacy while she remained at the height of her prowess.
The Sergio Peresson cello was used in this recording. Du Pre used a 1672 Stradivarius cello from her 1961 debut concert to 1964, and then a 1712 Davidov Stradivarius afterwards until 1970. The spotlight treatment that this recording casts on the Peresson cello is palpable, audibly more immediate, intricate and intimate than other recordings of the concerto in recent memory received, while the balance for the orchestra remains finely maintained. If one were searching for the most balanced recording of the cello and orchestra of this music, he/she needed not proceed further than the Deutsche Grammophon release of the piece by Rostropovich and Karajan, which carries the distinction of having the Rococo Variation accompaniment.
But to hear the sparkling chemistry between husband and wife on disc, the understood interplay and exchange that expressed the glow and power of their passion, which surely tantalized even the members of the orchestra, this 1970 recording is the stuff.
Perhaps more important than musicians realized, a first-rate mixing of recordings would breathe vitality into the experience of the music. And when that recording is played back in a high-end audio system, the efforts are easily discerned.
Jacqueline du Pré, cello
Chicago Symphony Orchestra
Daniel Barenboim, conductor
Digitally remastered