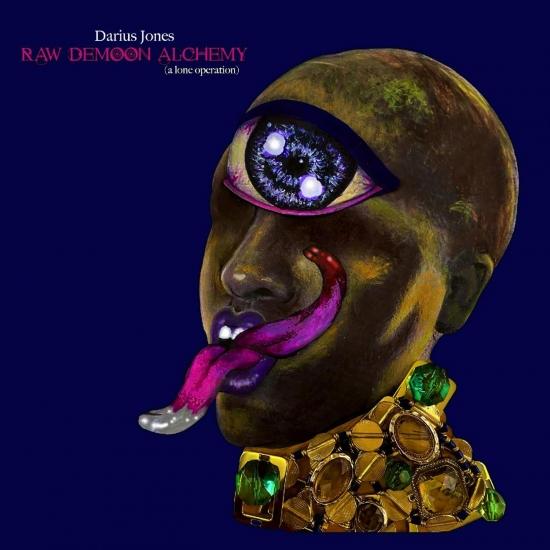 Raw Demoon Alchemy (A Lone Operation) harnesses the gamut of raw, unadulterated emotions — suppressed feelings that we’ve all been allowed to “feel” again in the wake of a global pandemic. Born out of a live performance in fall 2019, during the last stop of his tour in Portland, OR, saxophonist Darius Jones renders a solo effort that evokes sadness, rage, and confusion, all the while still holding for glimmers of hope for the future.
With four of its five tracks on Alchemy, Jones selects compositions from artists who are not just unapologetically Black but also notably ones that he regards as “world builders.” From Sun Ra, Ornette Coleman, and Roscoe Mitchell right up through the present with Georgia Anne Muldrow, Alchemy draws immeasurable strength from each of these artists who dared to envision and create an entire universe unto themselves, on their terms.
“I want to capture a moment in time, to crystallize the beginning of something at the end of something else,” says Jones. Separated and now divorced from his partner of 10 years, Alchemy balances the emotional heft of closure with the simple act of standing alone. Each track unearths a deep and profound vulnerability in every solo performance that isn’t just personal but also delves into the macro-level divisiveness of our current political climate.
With “Figure No. 2,” Jones offers us a modern-day version of the blues. Courtesy of Muldrow, her refrain encapsulates the vast breadth of the Black experience in America, transforming our deep-seated pain into our beauty and armor of resilience. Jones also proudly rests on the shoulders of Coleman and Mitchell, two of this music’s known improvisers who often stood alone in this music’s ever-changing landscape. He pays homage to Mitchell with “Nonaah,” which in the late 1970s was initially met with jeers from an audience, that is, until his 21+ minute long version overtook them.
Alchemy uncovers a duality of what it means to be alone, especially resonant in today’s climate of social distancing. In one turn, we were all forced to put life as we knew it on hold — to simply be still and deal with our emotional realities unencumbered by the distractions of life. But at another turn, Jones taps into an unknown power of his lone voice, finding a newfound strength and enthusiasm that will carry him — and its listeners — beyond the uncertainty and doubt of not knowing.
Darius Jones, alto saxophone 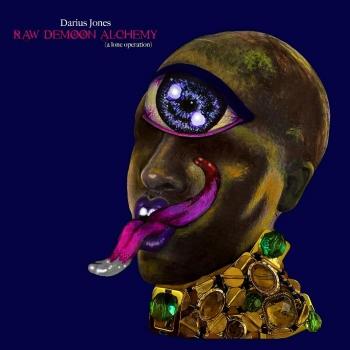 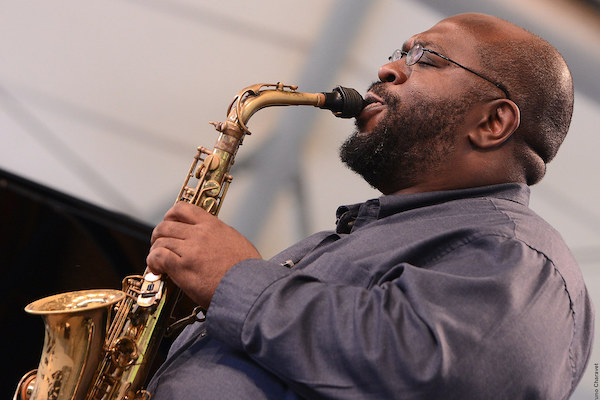 Darius Jones
Over the past decade, Darius Jones has created a recognizable voice as a critically acclaimed saxophonist and composer by embracing individuality and innovation in the tradition of African-American music. “Jones' concept is proudly his own,” writes Philip Clark in The Wire. [His music] poses big questions about the relationship between the African-American tradition of spirituals, blues and gospel, and now." With New York City as his base since 2005, Jones has brought his unique sound to dozens of cities around the United States, Canada and Europe.
Jones early on established himself as a powerful voice in the jazz community and was nominated in 2013 for Alto Saxophonist of the Year, and for Up & Coming Artist of the Year two years in a row for the Jazz Journalists Association Jazz Awards. Jones was one of Jazz Times' Debut Artists of the Year for 2009 and was featured in the Wall Street Journal in 2011. In 2012 he was featured in DownBeat and on WBGO's The Checkout. Jones' 2012 release, Book of Mæ'bul (Another Kind of Sunrise) was listed among NPR's Best Top 10 Jazz Albums of that year. "Jones speaks through his alto in an original and unforced language," writes DownBeat's Joe Tangari. Critics have called him "robustly creative" (Nate Chinen, New York Times) and "one of NYC's most incisive and passionate saxists" (Time Out New York). AllAboutJazz.com reviewer Troy Collins writes, "Jones has set the stage for a winning series of albums designed to document his rise as one of the most impressive and unique voices of our time."
More recently The New York Times named Jones among the Best Live Jazz Performances of 2017 for his Vision Festival performance with Farmers by Nature.
Jones has collaborated with artists including Gerald Cleaver, Oliver Lake, William Parker, Craig Taborn, Jason Moran, Georgia Ann Muldrow, Trevor Dunn, Eric Revis, Mike Reed, Nasheet Waits, Orrin Evans, Branford Marsalis, Kris Davis, Vijay Iyer, Marshall Allen, Dave Burrell, James Carter, Harriet Tubman, JD Allen, Tyshawn Sorey, Andrew Cyrille, Yo La Tengo, Chad Taylor, Dan Weiss, Matt Mitchell, Ches Smith, Steve Lehman, Jim Black, Sun Ra Arkestra, Shazhad Ismaily, Fay Victor, Cooper-Moore, Imani Uzuri, Matthew Shipp and many more.
Signed to AUM Fidelity records in 2009, Jones has released a string of diverse recordings which comprise his Man’ish Boy Epic, featuring music and images evocative of Black Futurism.
In 2008 Jones was awarded the Van Lier Fellowship by Roulette, which he used to launch his chamber ensemble, the Elizabeth-Caroline Unit, a project dedicated to new works for voice. Roulette continued their support for Darius' work through a Jerome Foundation Commission, and he was a Jerome Artist-in-Residence when the Elizabeth-Caroline Unit premiered the first section of The Oversoul Manual, in the Spring of 2014. Jones made his compositional debut at Carnegie Hall with the same work in October of 2014. In March 2018, Jones presented a new composition entitled LawNOrder a dramatic commentary on social justice and American politics, at Willamette University in Salem, Oregon.
In 2013, Jones was awarded the French-American Jazz Exchange grant for a collaboration with French vocalist Emilie Lesbros.
Jones graduated from Virginia Commonwealth University with a Bachelors in Jazz Studies in 2003, earning a Master's Degree in Jazz Performance/Composition from New York University in 2008. He also taught New Music Improvisation there for a year as an adjunct professor. Jones taught saxophone and improvisation at Columbia University in 2017.
Of note, Jones was featured in the Wall Street Journal and BBC's Jazz on 3 in 2011. In 2012 he was featured in the New York City Jazz Record, JazzTimes.com, the Village Voice Blog, DownBeat, and on WBGO's The Checkout. Darius was featured on the cover of Portuguese magazine, Jazz.pt in 2012, and on the cover of Italian magazine, Jazz Colours, in 2013. Darius' 2012 release, Book of Mæ'bul (Another Kind of Sunrise) was listed among NPR's Best Top 10 Jazz Albums of that year.