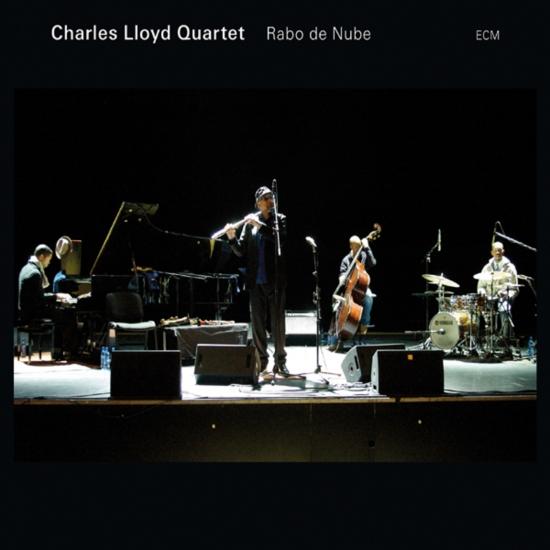 Rabo de Nube captures a phenomenal show by the legendary, seventy-yer-old saxophonist/flutist Charles Lloyd, with his new quartet featuring pianist Jason Moran, bassist Reuben Rogers and drummer Eric Harland. This recording exudes everything that makes jazz such a vibrant art.
This live album, recorded in Basel in 2007, is issued in time for Charles’s 70th birthday on March 15, 2008. The disc introduces the newest edition of the Lloyd Quartet, with Jason Moran on piano and Reuben Rogers on bass joining Charles and drummer Eric Harland (both Moran and Rogers making their ECM debuts here). The work doesn’t stop, even for birthday celebrations, and just as Lloyd has continued to refine his sound as a player so he continues to shape his group music, always encouraging the players – in this case musicians half his age – to find their own space inside it.
“Rabo de Nube” (Tail of a Cloud) is named for the tune by Cuban singer-songwriter Silvio Rodríguez which concludes the performance here, a beautiful ballad that has long been a favourite of Lloyd’s. It makes its second appearance in his ECM discography, having previously appeared on “Lift Every Voice”, recorded in 2002. All other tunes are Lloyd originals and include the vintage “Sweet Georgia Bright”, a piece that Charles first recorded in 1964, both with his own band and with Cannonball Adderley’s group, and which, with its driving momentum, has been a concert favourite ever since. The Basel concert opens with “Prometheus”, which seems to borrow some of “Georgia Bright”’s fire. “Migration of Spirit” is a big, radiant tenor meditation. “Booker’s Garden”, in memory of childhood friend Booker Little, is a cheery tribute with the alto flute. The tarogato comes to the fore in “Ramanujan”, a piece whose non-specific tribal pulses tap into a universal folk-dance that has belonged to the ambit of Lloyd’s music since at least the late 60s and “Journey Within.” Its open form encourages some swirling piano responses from Moran, who gets back to the roots on “La Colline de Monk”, which, in turn, leads to “Sweet Georgia”. In all, “Rabo de Nube”, the album, gives a good account of the scope of Charles Lloyd’s music today.

Charles Lloyd has always led exceptional bands, and this is one of the finest. Following on from the live “Rabo de Nube” which won both the Readers and Critics Polls of Jazz Times, here is a studio album from the quartet with Jason Moran, Reuben Rogers and Eric Harland.
Memphis-born Lloyd has played with some exceptional pianists in the course of his long career, starting with Phineas Newborn in his home town, with Joe Zawinul in the Cannonball Adderley group, and with Keith Jarrett, whom Lloyd introduced in his pioneering group of the 1960s. Subsequent Lloyd quartet pianists have included Michel Petrucciani, Bobo Stenson, and Geri Allen. Unfazed by the achievements of these distinguished predecessors, Jason Moran finds his own, exciting way to play inside Lloyd’s musical concepts. As the New York Times once observed, Moran reaches both further back in the jazz tradition and further outside it than most of his contemporaries. His strongly chordal approach and his percussive originality took off from an early interest in Thelonious Monk, but Moran (born 1975) studied with three great teachers – Jaki Byard, Andrew Hill, and Muhal Richard Abrams – who encouraged him to find his own path. He has recorded a number of critically-acclaimed albums as a leader, won a number of prizes including the Jazz Journalists Association’s Pianist of the Year Award, and performed with many great musicians from Wayne Shorter to Lee Konitz.
Jason Moran is a pianist, composer, and bandleader who mines a variety of musical styles to create adventurous, genre-crossing jazz performances. Moran’s signature corpus marries established classical, blues, and jazz techniques with the musical influences of his generation, including funk, hip-hop, and rock. On his solo piano album, Modernistic (2002), he explores the evolution of twentieth-century rhythmic techniques through his virtuosic execution of two-handed “stride” piano—a style used extensively by jazz artists in the 1920s—while Same Mother (2005) is a re-examination of the emotional and stylistic elements of the blues tradition.
Reuben Rogers was born in the Virgin Islands and grew up listening to calypso and reggae as well as jazz, exposure that seems to have impacted on the lyrical dancing swing of his bass playing. He works exceptionally well with Harland, exploring loose grooves behind Lloyd ’s solos, and speaks of the joy of “being in the music in the moment,” when the Lloyd band is improvising collectively, “without any worries, just giving it all.” A much sought after sideman, Reuben has also worked extensively with Nicholas Payton, Joshua Redman, Dianne Reeves and more.
Eric Harland is increasingly regarded as one of the most important contemporary jazz drummers. In addition to his work with Lloyd in the quartet and in the Sangam trio (with Zakir Hussain) he has played and recorded with McCoy Tyner, Pharoah Sanders, Greg Osby, Dave Holland and many others.