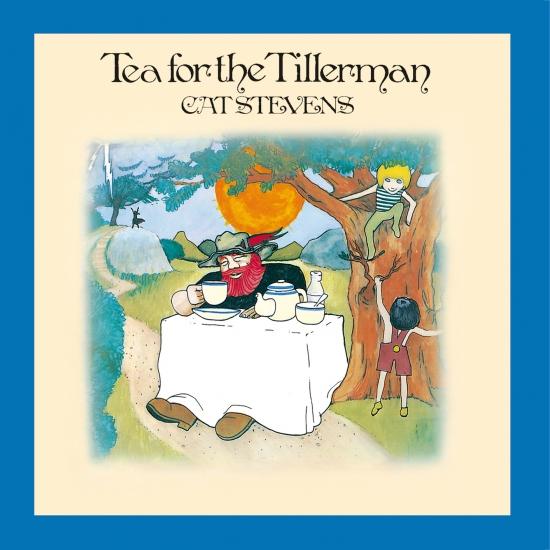 Info for Tea For The Tillerman (Remastered)

Tea For The Tillerman is one of Cat Stevens' finest albums and a gem in the crown of early 1970s singer/songwriterdom. Stevens manages to have his cake and eat it too, simultaneously achieving pop accessibility and artistic relevance. The feel is decidedly gentle and spare. Apart from the occasional string section, Stevens is accompanied only by a three-piece band as he sings his introspective lyrics with appreciable favor.
„Tea for the Tillerman and the likeably underwrought hit 'Wild World' established Stevens as a more reserved British version of James Taylor.' (Rolling Stone)
„Tea for the Tillerman' is like a musical collection of children's tales by Stevens. The delicacy of the arrangements, Paul Samwell-Smith's brilliant otherworldly production, and Steven's en- trancing melodies and images easily make this his best work.' (All Music Guide)
Cat Stevens, guitar, keyboards, vocals
Alun Davies, guitar
John Ryan, bass
Harvey Burns, drums
Jack Rostein, solo violin
Del Newman, string arrangement
Recorded in July 1970 at Morgan Studios, London
Produced by Paul Samwell-Smith
Digitally remastered
#206 On Rolling Stone's List Of 500 Greatest Albums Of All Time

Cat Stevens (Yusuf)
“The childlike imagery of the Sixties and Seventies were the daydreams of a generation which believed in Peace and Love; looking back, those are still principles I go by. Today, with the constant drumming of war, we need those principles more than ever before. There are still many people who appreciate my past ephemeral stages and the lessons they represent. The fact that a new generation listens to my records and appreciates them today shows me that there's still something in them worthy to ponder." – YUSUF ISLAM, 2005
Yusuf Islam, formerly known as Cat Stevens, has created some of the most spiritual and reflective music to come out of the 1960’s and 70’s. Timeless musing of the pain and pleasure of discovering what life is about during the volatility of youth. His musical legacy and chart successes along life’s way unquestioningly defined his role as one of the most sensitive '70s singer-songwriters, influencing generations of musicians ever since.
Born Steven Georgiou in London, Cat Stevens began his career in the early 1960’s. Discovered as a teenager in 1966, Cat Stevens demonstrated a rare talent for creating hit songs such as “The First Cut is the Deepest” and “Here Comes My Baby,” both of which became Top Ten singles. His debut album, Matthew and Son, released in 1967, spawned another Top Ten hit in the UK with the title track. Over the next few years, Cat Stevens would release eight consecutive gold albums.
The release of Cat Stevens fourth album, Tea for the Tillerman, heralded the heartrending nature of his quest for ‘big’ answers to life and marked his US crossover success with the Top 20 hit “Wild World” and the classic “Father and Son.” Solidifying his position as a master singer/songwriter, Cat Stevens released, Teaser And The Firecat in 1971, which featured the Top 5 singles “Moon Shadow” and “Peace Train.” Catch Bull at Four, released in 1972, and Buddha and the Chocolate Box, released in 1974, and in 1975, Cat Stevens Greatest Hits sold over 3 million copies in the US alone. Cat Stevens also contributed songs to the cult comedy film Harold and Maude in 1972.
After many years of heartfelt, metaphysical exploration, Cat Stevens discovered Islam, just before the religion began to draw the political headlines on the world’s stage. He had been spiritually moved, following his study of an English translation of the Qur’an, and in 1977 he became a Muslim. Subsequently adopting a new name after reading the Qur’anic story of Joseph (the son of Jacob), he became Yusuf Islam. Then, to the surprise of millions of admirers, he haply bowed out and withdrew from the spotlight.
A devoted family man, he has continuously been working for charitable causes especially in the field of children and education. In a historic event, he achieved equality for Muslim families in the U.K. by founding the first government-funded Primary school for Muslim pupils alongside long established existing schools for Christians and Jewish communities.
Most of his royalties have generously been donated to various children’s causes - including his charity Small Kindness - which has helped thousands of orphans and destitute families in the Balkans of Europe.
September 2000 saw the release of The Very Best Of Cat Stevens marking his first gold record in more than 20 years. In 2001, the Cat Stevens Box Set was released from which he donated the royalties to the September 11th Fund and Small Kindness.
Today, Yusuf Islam is arguably one of the world’s most famous converts to Islam. He has been awarded the ‘World Social Award’ for his humanitarian relief work. Previous recipients of this award include Pope John Paul II, Steven Spielberg, and Sir Paul McCartney. More recently, in November 2004, he was honored with the ‘Man for Peace’ award by a committee of Nobel peace laureates and this year will receive an honorary doctorate for his work in education in the UK.