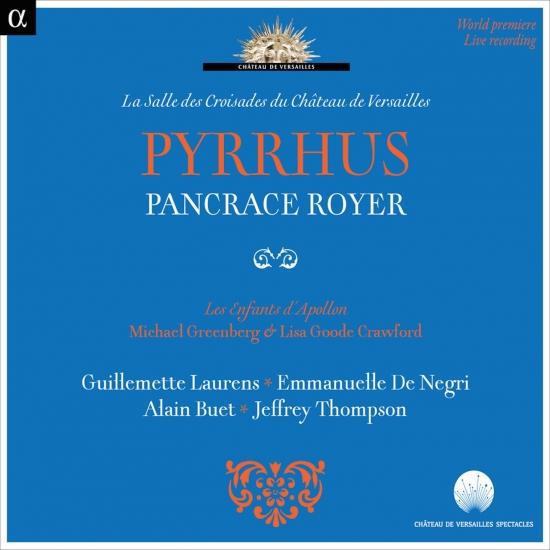 ROYER: After languishing in obscurity for over two centuries, Pancrace Royer (1705-1755) is now quite well-known for his elegant and dramatic harpsichord music. Music master to the children of Louis XV and composer of the King's Chamber, General Inspector of the Paris Opéra and director of the Concert Spirituel, Royer is also remembered as the subject of a 1742 police report for getting into a heated argument with his rival Jean-Philippe Rameau in public, and for incurring the wrath of Voltaire when he set that author's 'Pandore' to music without asking permission to modify the text! Decidedly, Royer is a figure worthy of further investigation.
Pyrrhus: was the first of several works Royer composed for the Paris Opera and his only tragédie en musique. Withdrawn after seven performances, it has never been revived. This concert will be its modern premiere - not an unusual occurrence in the world of historically informed performance, but Pyrrhus is distinctive because it is one of the few operas created at the Paris Opera for which the original performance material has survived intact. Theoretically, if the manuscripts were to be placed before the same number of musicians as participated in the creation, it would be possible to give the eighth show... nearly three hundred years later! A most remarkable means of time travel.
PYRRHUS: These original instrumental and vocal parts are invaluable for enabling the reconstitution of the original score of Pyrrhus, for which no autograph manuscript is known to survive. Because we have a complete set of parts, we do not have to rely on the 18th century printed reduced score, which, as was usual with such scores, does not include the inner string parts or chorus parts, and which is often vague about the orchestration of the melody instruments. Saving space by reducing the score reduced the cost of publication of such scores in the 18th century. However, it also resulted in omissions and ambiguities that allow today's musicians a great deal of latitude in instrumentation compared with the music of the Classical and Romantic periods. As a consequence, the personal taste of today's performers often decides the choice of instrumentation. For example, it is possible to perform the operas of George Frideric Handel (1685-1759) with a forty-piece orchestra or an ensemble comprising only two violins, a violoncello and a harpsichord. Without access to original performance material, such a subjective approach is often applied generally to works of music created over an extended historical period, without consideration for their geographical origin or the specific style of the composer.
On the other hand, the source material of Pyrrhus, by allowing the complete restoration of the work, reveals with rare detail how its young composer, fully aware of the resources available to him at the Paris Opera, calculates his instrumental effects. In this regard it contributes significantly to our knowledge of French opera and the evolution of the symphony orchestra.
The drama is remarkably coherent for an opera libretto. Pyrrhus conquers Troy and kills its king but is himself subjugated by the beauty of the defeated princess Polyxène. She in turn is coveted by Pyrrhus's companion in arms, Acamas, and despised by the magician-princess Eriphile, Pyrrhus's betrothed, who join forces to prevent the union. Torn between her duty towards her defeated people and her own happiness, will Polyxène declare her love for Pyrrhus before the sinister projects of Eriphile and Acamas succeed? The suspense is maintained until the final bar!
Emmanuelle de Negri, soprano, as the heroine, Polyxéne
Alain Buet, baritone, as Pyrrhus
Guillemette Laurens, mezzo-soprano, as Eriphile, the villainess
Jeffrey Thompson, haute-contre, as Pyrrhus' friend, Acamas
Les Enfants d’Apollon Choir and Orchestra
Michael Greenberg, conductor
Lisa Goode Crawford, artistic director