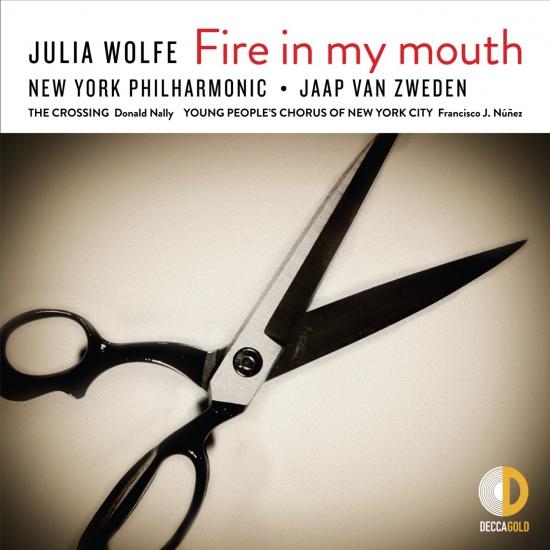 Info for Julia Wolfe: Fire in my mouth

The New York Philharmonic and Music Director Jaap van Zweden’s World Premiere performances of Julia Wolfe’s, Fire in my mouth will be released on Universal Music Group’s newly established US classical music label.
The New York Philharmonic premiered Julia Wolfe’s Fire in my mouth, which the Orchestra also co-commissioned, in January 2019, conducted by Jaap van Zweden and featuring The Crossing, conducted by Donald Nally, and the Young People’s Chorus of New York City, directed by Francisco J. Núñez. The New York Times called the work “ambitious, heartfelt, often compelling. … There is both heady optimism and a sense of dread in Ms. Wolfe’s music. … Mr. van Zweden led a commanding account of a score that … ends with an elegiac final chorus in which the names of all 146 victims are tenderly sung to create a fabric of music and memory.” The performance earned the coveted spot in the highbrow / brilliant quadrant of New York magazine’s Approval Matrix.
Fire in my mouth was premiered as part of New York Stories: Threads of Our City, the Philharmonic’s two-week examination of New York City’s roots as a city of immigrants. The work is a reflection on the New York garment industry at the turn of the 20th century through a focus on the 1911 Triangle Shirtwaist Factory fire, which killed 146 garment workers, most of them young immigrants. The title refers not only to the Triangle Shirtwaist Factory fire, but also to Ukrainian immigrant and labor activist Clara Lemlich Shavelson, who, when looking back on her radical youth, said, “Ah, then I had fire in my mouth.” The music evokes the roar of hundreds of sewing machines and the language of protest to recreate the world of women working in New York garment factories in the early 20th century, the majority of whom were Jewish and Italian immigrants.
Fire in my mouth was co-commissioned by the New York Philharmonic; Cal Performances at the University of California, Berkeley; the Krannert Center at the University of Illinois Urbana- Champaign; and the University Musical Society at the University of Michigan, Ann Arbor. In writing the piece, Julia Wolfe used her signature intensive research methods, drawing on oral histories, speeches, interviews, and historical writings. She workshopped Fire in my mouth with the Philharmonic’s three university commissioning partners; campus-wide discussions about history, music, and creative writing informed the work. Fire in my mouth is Julia Wolfe’s third work in a series of pieces on the American worker; the others are Steel Hammer, her reimagining of the John Henry legend, and Anthracite Fields, her Pulitzer Prize–winning oratorio about Pennsylvania coal miners, which the New York Philharmonic presented in its New York Premiere in 2014 and the recording of which was nominated for a Grammy for Best Contemporary Classical Composition. Julia Wolfe was awarded a MacArthur Foundation “Genius Grant” in 2016, and Musical America named her 2019 Composer of the Year.
The New York Philharmonic launched its partnership with Decca Gold in February 2018 with the release of Jaap van Zweden and the Philharmonic’s performances of Beethoven’s Symphonies Nos. 5 and 7. Subsequent releases include Sing Happy (May 2018), featuring Audra McDonald’s 2018 Spring Gala performance with the Philharmonic; live performances of Stravinsky’s Le Sacre du printemps and Debussy’s La Mer (February 2019) from Maestro van Zweden’s opening weeks as Music Director; and Soloists of the New York Philharmonic (May 2019), featuring concertos performed by Concertmaster Frank Huang, Principal Viola Cynthia Phelps, Principal Flute Robert Langevin, Principal Clarinet Anthony McGill, and Principal Trombone Joseph Alessi.
New York Philharmonic
Jaap van Zweden, conductor 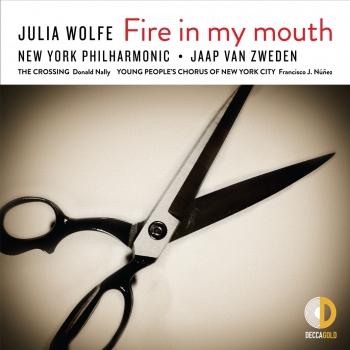 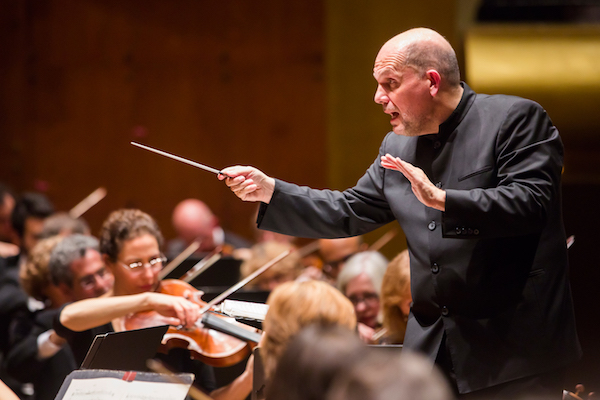