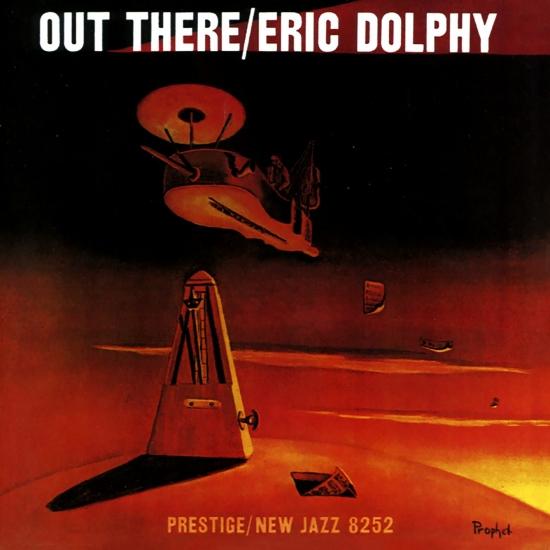 Info for Out There (Rudy Van Gelder Remaster)

Out There was the second album for the Prestige subsidiary New Jazz by the inestimable multi-reedman / composer Eric Dolphy (1928-1964). It was in every way stunning—from the eerie cover painting to the starkly beautiful colors of an ensemble consisting of reeds, cello, bass, and drums, to the ways in which the compositions (four by Dolphy) fused bebop solos and ever-expanding freebop harmonies with contemporary classical chamber works. This was a deeply personal statement by a musician who in 1960 was beginning to establish himself as one of the most expressive instrumental voices of his time. Dolphy and young Ron Carter, heard here on cello rather than bass, interact throughout with a closeness bordering on the extrasensory, and on Charles Mingus’s “Eclipse” and especially Hale Smith’s “Feathers,” Dolphy produces two of the most moving performances of a life that ended all too soon.
"The follow-up album to Outward Bound, Eric Dolphy's second effort for the Prestige/New Jazz label (and later remastered by Rudy Van Gelder) was equally praised and vilified for many reasons. At a time when the "anti-jazz" tag was being tossed around, Dolphy's nonlinear, harshly harmonic music gave some critics grist for the grinding mill. A second or third listen to Dolphy's music reveals an unrepentant shadowy side, but also depth and purpose that were unprecedented and remain singularly unique. The usage of bassist George Duvivier and cellist Ron Carter (an idea borrowed from Dolphy's days with Chico Hamilton) gives the music its overcast color base, in many ways equally stunning and uninviting. Dolphy's ideas must be fully embraced, taken to heart, and accepted before listening. The music reveals the depth of his thought processes while also expressing his bare-bones sensitive and kind nature. The bluesy "Serene," led by Carter alongside Dolphy's bass clarinet, and the wondrous ballad "Sketch of Melba" provide the sweetest moments, the latter tune identified by the fluttery introspective flute of the leader, clearly indicating where latter-period musicians like James Newton initially heard what would form their concept. Three pieces owe alms to Charles Mingus: his dark, moody, doleful, melodic, and reluctant composition "Eclipse"; the co-written (with Dolphy) craggy and scattered title track featuring Dolphy's emblematic alto held together by the unflappable swing of drummer Roy Haynes; and "The Baron," the leader's dark and dirty, wise and willful tribute to his former boss, accented by a choppy and chatty solo from Carter. "17 West," almost a post-bop standard, is briefly tonal with a patented flute solo and questioning cello inserts, while the unexpected closer written by Hale Smith, "Feathers," is a haunting, soulful ballad of regret where Dolphy's alto is more immediately heard in the foreground. A somber and unusual album by the standards of any style of music, Out There explores Dolphy's vision in approaching the concept of tonality in a way few others -- before, concurrent, or after -- have ever envisioned." (Michael G. Nastos, AMG)
Eric Dolphy, alto saxophone, bass clarinet, B-flat clarinet, flute
Ron Carter, cello
George Duvivier, bass
Roy Haynes, drums
Recorded August 15, 1960 at Van Gelder Studio, Englewood Cliffs, NJ
Produced by Esmond Edwards
Digitally remastered 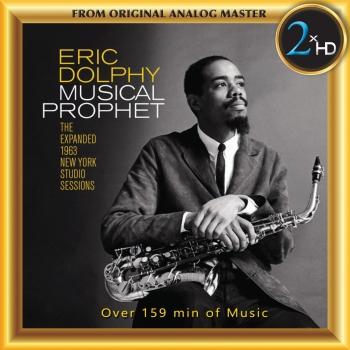 Eric Dolphy
was a true original with his own distinctive styles on alto, flute, and bass clarinet. His music fell into the "avant-garde" category yet he did not discard chordal improvisation altogether (although the relationship of his notes to the chords was often pretty abstract). While most of the other "free jazz" players sounded very serious in their playing, Dolphy's solos often came across as ecstatic and exuberant. His improvisations utilized very wide intervals, a variety of nonmusical speechlike sounds, and its own logic. Although the alto was his main axe, Dolphy was the first flutist to move beyond bop (influencing James Newton) and he largely introduced the bass clarinet to jazz as a solo instrument. He was also one of the first (after Coleman Hawkins) to record unaccompanied horn solos, preceding Anthony Braxton by five years.
Eric Dolphy first recorded while with Roy Porter & His Orchestra (1948-1950) in Los Angeles, he was in the Army for two years, and he then played in obscurity in L.A. until he joined the Chico Hamilton Quintet in 1958. In 1959 he settled in New York and was soon a member of the Charles Mingus Quartet. By 1960 Dolphy was recording regularly as a leader for Prestige and gaining attention for his work with Mingus, but throughout his short career he had difficulty gaining steady work due to his very advanced style. Dolphy recorded quite a bit during 1960-1961, including three albums cut at the Five Spot while with trumpeter Booker Little, Free Jazz with Ornette Coleman, sessions with Max Roach, and some European dates.
Late in 1961 Dolphy was part of the John Coltrane Quintet; their engagement at the Village Vanguard caused conservative critics to try to smear them as playing "anti-jazz" due to the lengthy and very free solos. During 1962-1963 Dolphy played third stream music with Gunther Schuller and Orchestra U.S.A., and gigged all too rarely with his own group. In 1964 he recorded his classic Out to Lunch for Blue Note and traveled to Europe with the Charles Mingus Sextet (which was arguably the bassist's most exciting band, as shown on The Great Concert of Charles Mingus). After he chose to stay in Europe, Dolphy had a few gigs but then died suddenly from a diabetic coma at the age of 36, a major loss.
Virtually all of Eric Dolphy's recordings are in print, including a nine-CD box set of all of his Prestige sessions. In addition, Dolphy can be seen on film with John Coltrane (included on The Coltrane Legacy) and with Mingus from 1964 on a video released by Shanachie. (Scott Yanow)