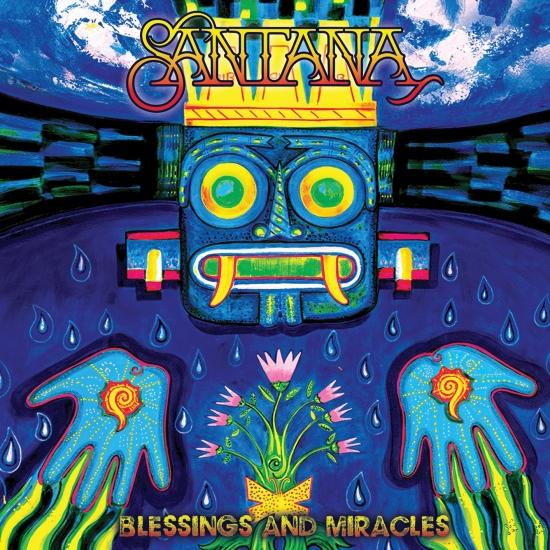 Info for Blessings and Miracles

Blessings and Miracles is one of the most ambitious, inspired and magical albums of Santana’s storied career, on which the legendary guitarist aims higher than ever. “The title of this album comes from my belief that we’re born with heavenly powers that allows us to create blessings and miracles,” Santana says. “The world programs you to be unworthy of those gifts, but we have to utilize light, spirit and soul – they’re indestructible and immutable. Those are the three main elements on this album.”
In addition to Rob Thomas, Blessings and Miracles sees Santana collaborating with a diverse host of brilliant artists, writers and producers including Chris Stapleton, G-Eazy, Diane Warren, Steve Winwood, Chick Corea, Rick Rubin, Corey Glover, Kirk Hammett, Ally Brooke, American Authors and Narada Michael Walden, among others, on genre-bending, hook-filled knockout musical celebrations.
The record also features bravura performances from members of Santana’s touring band (including drummer Cindy Blackman Santana and singer Tommy Anthony), as well as impeccable vocals and keyboards by the guitarist’s son, Salvador Santana, and stunning lead vocals by daughter, Stella Santana.
Expectations understandably run high with pairing Carlos Santana and Rob Thomas, whose 1999 multiple Grammy-winning smash “Smooth” became a worldwide staple – and the two performers have turned in a new classic. “Move” is a grinding, grooving and breathtaking mix of pop and Latin rock with sure-fire hooks for days. Thomas, backed by the vocal talents of American Authors, is dynamic and sensual, and Santana matches his supreme performance with solos that explode with tectonic force.
“‘Move’ came about very much like how ‘Smooth’ happened,” Santana recalls. “It was like divine intelligence behind the scenes, and I just knew I had to record it with Rob. The song is about awakening your molecules. Ignite and activate yourself – you know, move. When Rob and I work together, we have a sound that’s splendiferous.”
The album’s second single, “She’s Fire,” is a hypnotically soulful ballad that works its way into your body chemistry and stays there. It’s one of two cuts written by mega-award-winning, chart-topping composer Diane Warren, and it sees Santana wrapping his exquisite guitar melodies around an enticing narrative spun by the rapper G-Eazy. “I’m so honored that Diane reached out to me and sent me her songs,” says Santana. Regarding G-Eazy, the guitarist is no less effusive. “He’s so talented. I’m thrilled at how we both sound on this song,” he says. “It reminds me of when Bill Graham once told me: ‘Your music is spiritual and sensual. That’s who you are.’ And that’s the message of ‘She’s Fire.’”
Santana spent much of the past two years recording Blessings and Miracles, serving as producer and collaborating with other record makers. Recording during Covid created a challenge only in that some musicians were separated geographically, beamed into sessions via technology; inspiration, however, was never in short supply. “It’s amazing how we can record together these days without being in the same studio,” Santana notes. “I just close my eyes and I’m in the same room with whomever I’m playing with, even if they’re somewhere far away. We share frequencies together.”
As for the stellar talents that appear alongside him on Blessings and Miracles, Santana admits that he’s sometimes surprised at how they magically enter his life. “I don’t choose people – it’s like I’m chosen,” he says. “But, of course, I’m honored to work with such incredible artists. I’m a surfer riding those waves that become songs by different artists, creators and architects. I’m very fortunate that I have the opportunity to do that. It’s a gift I don’t take for granted.”
Carlos Santana
Please Note: We offer this album in its native sampling rate of 48kHz, 24-bit. The provided 96kHz version was up-sampled and offers no audible value! The files inside the MQA container are also up-sampled - hence we don't offer the MQA version of the album!