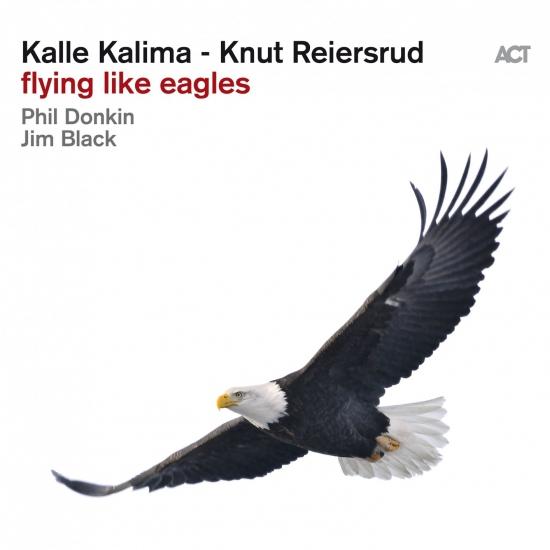 As you listen to "Flying Like Eagles", an episode from Jack Kerouac's novel "On the Road" might flicker across your mind, or perhaps a scene from the movie "Easy Rider". And that is because the point of departure for this album is traditional roots music from America, inspired in part by American-Indian heritage, plus three classic songs that are also imbued with that same spirit of unspoilt authenticity and freedom.
The origins of the main protagonists on this album might come as a surprise, however: these two guitarists are not actually from the southern states of the US but from Scandinavia. And yet there isn’t any contradiction: Kalle Kalima, who is Finnish, had already developed a passion for traditional American folk music as a teenager, and a year spent as an exchange student in Chicago immersed in the local scene deepened that interest further. Indeed, this music has remained an abiding inspiration and presence in Kalima’s music, most recently in his Americana jazz project "High Noon". Knut Reiersrud has been demonstrating all his life that Norwegians have the blues too. After Buddy Guy and Otis Rush discovered him at the age of 18, the US became his musical home. He played with greats of American music such as Dr John, Stevie Ray Vaughan, the Blind Boys of Alabama and soul singer Mighty Sam McClain.
Guitarists Kalima and Reiersrud complement each other perfectly – one comes from jazz and rock, the other from blues and world music. Kalima explains: " It was Siggi Loch who had the idea for this album and who brought us together. We only knew each of other before then from having listened to one another. But in the studio, a natural flow developed quickly. I mostly took the melody line with my electric guitar, whereas Knut on his various different guitars tended to concentrate on colours, sounds and sound layers. It was important to us that the music should sound very genuine, so we didn't fix much in advance, and preferred to put our trust in what would happen as we played. The album should sound like we're jamming." And so "Flying Like Eagles" has become a proper guitar album, in which Kalima and Reiersrud explore the manifold possibilities of their instruments. The fact that it sounds so fresh, intuitive and authentic is also due to the first-class rhythm section: Phil Donkin on bass and drummer Jim Black are both first-call players who have made their mark on the New York scene.
The challenge here was to take pieces with ancient melodies whose shape is often determined by their vocal line and to give them new life. The opening and closing tracks both have their origins in the American-Indian tradition, but each one develops in completely the opposite direction from the other. "Strong Wind, Deep Water, Tall Trees, Warm Fire" has a way of hovering hypnotically, whereas "Little One" with its constantly repeated melodic line has a restrained opening from which it moves into an ecstatic rock-inflected improvisation by Kalima. Buffalo Springfield's protest song "For What It's Worth" lays down a strong groove and perhaps best defines the quintessence of "Flying Like Eagles". It demonstrates not just the superb artistry of both the guitarists as individual instrumentalists but also shows the way they instinctively dovetail with each other.
With its stomping rhythm and a haunting melodic hook, "Kiowa Lullaby" seems reminiscent of a war dance. The Eagles classic "Hotel California" is given a particular and unexpected twist by merging the original with a West African melody that Reiersrud once encountered on one of his many musical travels around the world. "Wayfaring Stranger" pours out the loneliness of a wandering musician. This folk/gospel ballad is given an exotic tinge with the introduction of a Hawaiian lap steel guitar. And finally, the quartet give "Hurt", a song best known in Johnny Cash's desolate interpretation, gets a hard-driven remake which would not be out of place in a film by Quentin Tarantino.
"Many of the songs on this disc come from populations and minorities who have lived harmoniously and in a connected way with nature, so the album is a tribute to them," Knut Reiersrud underlines. And it is a message which is now more topical than ever. May eagles continue to fly high, and for a long time yet...
"Flying Like Eagles" was created by curator/producer Siggi Loch for the concert series "Jazz at Berlin Philharmonic". It will receive its live premiere on 24 September 2019 at a concert in the Kammermusiksaal (chamber music hall) of the Berliner Philharmonie.
Kalle Kalima, electric guitar
Knut Reiersrud, resonator, electric & lap steel guitar, harmonica
Phil Donkin, bass
Jim Black, drums 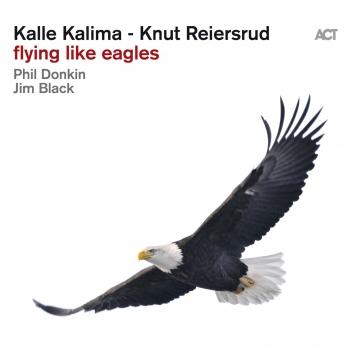 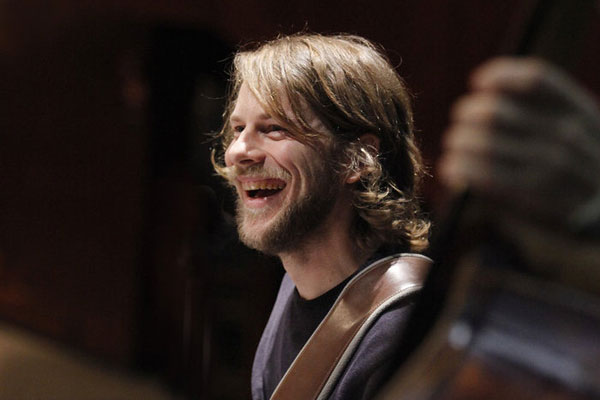 Kalle Kalima
(b. 1973 in Helsinki, Finland) has worked with trompeters Tomasz Stanko and Leo Wadada Smith, sax players Juhani Aaltonen, Anthony Braxton, bass players Greg Cohen and Sirone, guitarist Marc Ducret, composers Michael Wertmüller and Simon Stockhausen, pianist Jason Moran, drummers Jim Black and Tony Allen and singer Linda Sharrock as well as with Ensemble Resonanz and Jazzanova DJs. Kalima has composed music for NDR Big Band, Umo Big Band and Jousia Ensemble.
2000-2016 have been busy years for Kalima, touring mostly in Europe but also in Africa, Asia and Americas. Kalima ́s Trio “Long Winding Road” with bass player Greg Cohen (Tom Waits, Ornette Coleman) and Max Andrzejewski has been touring in 2016 with the “High Noon” album (ACT). The group Klima Kalima with Oliver Steidle and Oliver Potratz won ”Neuer Deutscher Jazzpreis” in 2008 and has released four albums. Kalima is also leading K-18, a Finnish group with quarter-tone accordion that won Jazz-Emma in Finland in 2013. In “Pentasonic” he plays guitar through electronics into 5 amps surrounding the audience. He is a member of the group “Kuu” with Christian Lillinger, Jelena Kuljic and Frank Möbus that will be bring out their second album in 2018. He has a trio “Tenors of Kalma” with Jimi Tenor, Finnish underground pop star. Their first album “Electric Willow” was released in early 2015 and brought Kalima “Echo –Jazz” Prize nomination in 2016. Kalima is member of “A Novel of Anomaly”, group of Swiss virtuoso singer Andreas Schaerer. Kalima is teaching jazz guitar at the university of Lucerne since 2017.
„Kalle Kalima & K-18 are harmonic chameleons changing colors, textures and lyrical direction at will to effectively captured the cinematic moods of the various films while working strictly in the audio format, the visuals are left up to the listener, 5 stars.“ Brent Black, Critical Jazz.com 6/14 “Kalima is a virtuoso who can do anything from single lines to electronicly altered hyper slide guitar...” (Thomas Wörtche, Jazzpodium 4/03) “A record that documents Kalle Kalima ́s flexibility, ability and amazing maturity both as a guitarist and as a band-leader” (Jazzdimensions.de 2001, Carina Prange about “Hippycone”). “...with his guitars Kalle Kalima proves to be a far reaching story-telling talent” (Jazzpodium Nr. 2 02/01, Frithsjof Strauß)
“Presenting a combination of reckless abandon and structural thinking, Kalle Kalima (b. 1973) is one of the most fascinating Finnish musicians at the moment. ...the guitarist has managed to formulate a unique sound both as a musician and as a tunesmith. Currently residing in Berlin, Kalima plants the roots of his music deeply in the Nordic landscapes and the hectic urban life of the German capital.” (Helsinki happens 01/01, Petri Silas, Finnland.)