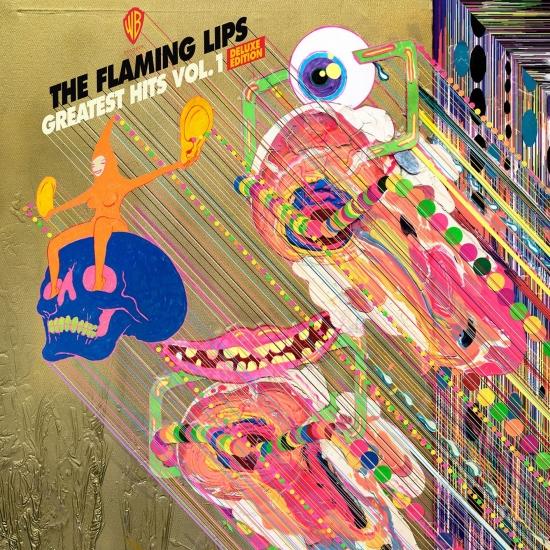 After 14 studio longplayers, released since 1983, the eccentric Oklahoma psychedelia adventurers will release a greatest hits album. The HighRes-Edition of Greatest Hits, Vol. 1.
The Flaming Lips announce their first official "hits" collection on Warner Bros. Records to be released on June 1. Greatest Hits Vol. 1 will compile eleven WBR-era singles and album tracks remastered. This is the first time The Lips have presented singles from Transmissions From The Satellite Heart (1993), Clouds Taste Metallic (1995), The Soft Bulletin (1999), Yoshimi Battles The Pink Robots (2002), At War With The Mystics (2006),Embryonic (2009) and their current album Oczy Mlody (2017).
The Deluxe High-Res-Edition of Greatest Hits Vol.1 significantly expands the concept of their "hits" and gathers some of their best-loved album tracks from the aforementioned albums plus deep cuts from their WBR album debut, Hit To Death In The Future Head (1992), along with music from, Zaireeka (1997), The Flaming Lips And Heady Fwends (2012) and The Terror (2013). The Deluxe Edition will also compile a generous hatful of International single B-sides, studio outtakes and several previously unreleased tracks to present an essential view into the extraordinary body of work from one of the most influential and enduring rock bands of all-time.
Each of the tracks in this collection has been remastered from the original tape sources by The Flaming Lips and long-time producer Dave Fridmann at Tarbox Road Studios. The resultant sound quality of these recordings is now far superior to all previously released versions.
The Flaming Lips
Digitally remastered
Please Note: We offer this album in its native sampling rate of 44.1 kHz and 48 kHz (Mixed sampling rates). The provided 96 kHz and 88.2 kHz version was up-sampled and offers no audible value!