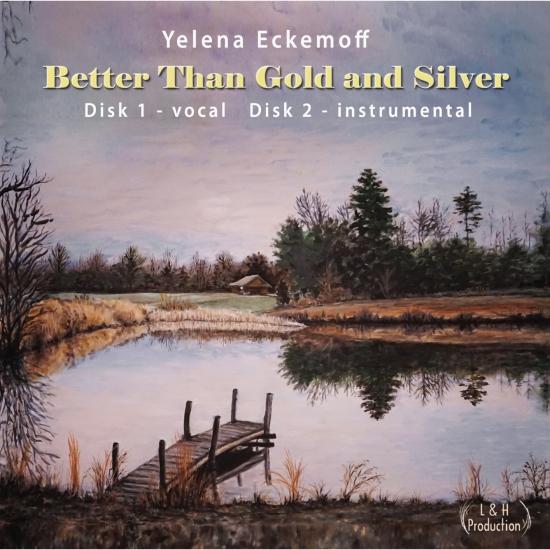 Info for Better Than Gold and Silver

The only real surprise at this stage in Yelena Eckemoff’s unique, super-prolific career would be if the Russian-born pianist-composer made new music that didn’t surprise.
But even by that standard, Yelena Eckemoff’s double album, Better Than Gold and Silver, on which she sets biblical psalms to music, is an amazement: Each disc of Better Than Gold and Silver consists of ten selections, presented in identical order. The first disc features Eckemoff with vocalists, the second disc consists of instrumental versions by the same ensemble, different takes with longer solos in which the vocal lines are given to the various instruments. The gorgeous clarion tone of Alessi’s trumpet spreads joy through a “songs without words” approach. Floating on Eckemoff’s glistening lyricism at the piano, which draws from her classical training as well as jazz, blues, gospel, and pop, the music is remarkably open and lit from within, seemingly inspired by Psalm 119: Thy word is a lamp unto my feet, and a light unto my path.
Though Eckemoff has long played religious music in church, she says: My musical settings of the Biblical Psalms do not belong to the oeuvre of Christian music. It is rather a work of modern jazz.
Yelena Eckemoff, piano
Tomás Cruz, tenor
Kim Mayo, mezzo-soprano
Ralph Alessi, trumpet
Ben Monder, guitar
Christian Howes, violin
Drew Gress, bass
Joey Baron, drums

Booklet for Better Than Gold and Silver