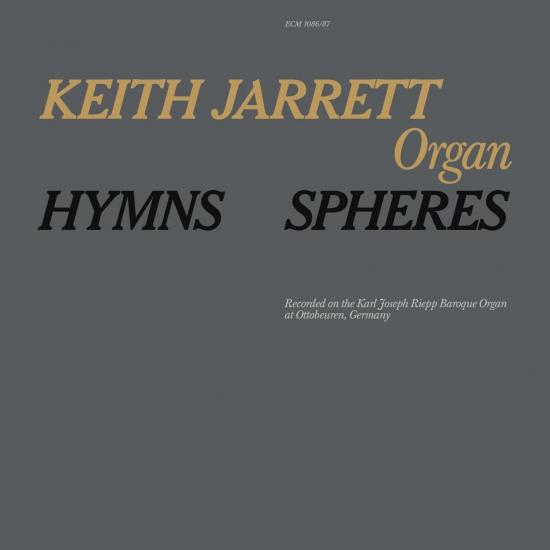 “Hymns/Spheres”, Keith Jarrett’s celebrated 1976 encounter with the Trinity organ of Ottobeuren’s Benedictine abbey, is at last released in 24bit Studio-Master quality as a double-album set remastered from the original analog tapes. “No overdubs or technical ornamentations were utilized, only the pure sound of the organ in the abbey is heard”. The pure sound, as channelled by the mind, hands, and feet of one of the great improvisers of the age. When “Hymns/Spheres” was first released in 1976, some critics made comparisons with the organ music of Ligeti, Messiaen and Reger, but time has shown this to be an essential expression of Jarrett’s creativity, original to the core.
The complete Hymns, Spheres, at last available on compact disc. Keith Jarrett’s first encounter with the Karl Joseph Riepp baroque organ of the Abbey of Ottobeuren – one of the great improvisers of the age communing with one of Europe’s most famous instruments – brought forth some truly unique music. The 1976 double LP release has long been a favourite amongst organ music aficionados as well as Jarrett’s loyal following, admired for Jarrett’s spontaneous improvisational resourcefulness, the variety of textures drawn from the instrument, and for the sheer physical power of the sound in the church, beautifully captured in the ECM recording.
When this music was first released on CD, as Spheres in 1985, it was in truncated form, with only four of the original eleven tracks. The present edition restores the joyful “Hymn of Remembrance” and “Hymn of Release” to the beginning and end of the set, and includes all nine movements of the experimental “Spheres”.
Keith Jarrett’s 1976 liner note: “These improvisations were recorded on the Trinity Organ, the larger of the two Karl Joseph Riepp (1710-1775) organs at the Benedictine Abbey Ottobeuren. No overdubs, technical ornamentations or additions were utilized, only the pure sound of the organ in the abbey is heard. Many of the unique effects, although never before used, were accomplished by pulling certain stops part way, while others remain completely open or closed. Amazingly, baroque organs have always had this capacity.” These ‘effects’ give Jarrett access to sliding pitches and notes outside the tempered scale.
Jarrett chose two tracks from Hymns, Spheres when compiling a double album of his personal favourites for ECM’s Rarum series in 2003.
Reviews from 1977:
From the New York Times: “Mr Jarrett’s latest release stands apart not only from his own canon but from almost every other record on the market. Organ improvisations are hardly unusual but a ‘jazz’ musician playing an unaccompanied baroque organ recorded on location is something new. ‘Jazz’ is in quotation marks because this has absolutely nothing to do with any known jazz tradition.... Most of the music is slow and spacey, with effects akin to electronic music, attained through a manipulation of organ stops to produce strange sonorities. It’s an exotic set, and worth the attention of the curious jazz fan, progressive rock fan, and classical avant-garde fan.”
From England’s Oxford Mail: “Jarrett’s extraordinary gift for melody and rhythm inside occasionally daunting improvisations make this a staggering record of the ability of a true musician to conjure music from the air that inspires, delights and provokes.”
From Poland’s Jazz Forum: “Jarrett continues his extravagant ECM parade with a set of church organ improvisations. It is a grandiose undertaking and though this devotional session will not be everyone’s idea of a jazz record, Jarrett’s solid and dignified music sets him right along with the true masters of organ composition. ‘Hymns, Spheres’ may prove to be an important landmark in contemporary music.”
Keith Jarrett went on to do a second set of recordings at Ottobeuren in 1980, issued as “Invocations”, in the double album set Invocations/The Moth and the Flame.
Over the years, music from Hymns, Spheres has been incorporated into the soundtracks of a number of adventurous films, most recently Ron Fricke’s ‘non-verbal’ documentary “Samsara” (2011).
Keith Jarrett, piano
Digitally remastered.