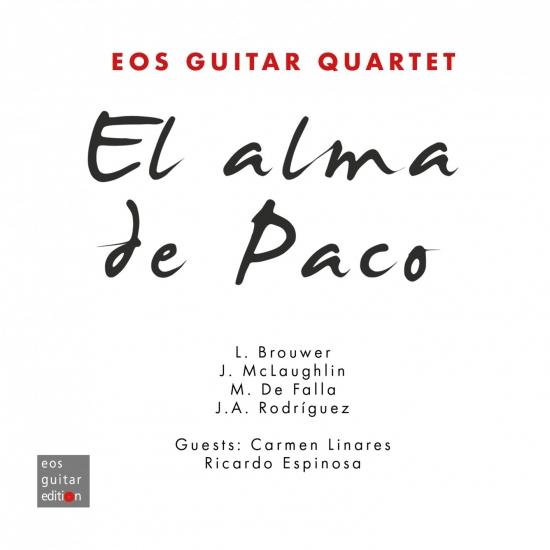 The Spanish master guitarist Paco de Lucía, whose death anniversary will be celebrated for the seventh time in 2021, is the focus of the new album by the Eos Guitar Quartet (Julio Azcano, Marcel Ege, David Sautter, Michael Winkler). For the four musicians, his music, his innovative power and not least their personal contact with him were a constant source of inspiration.
As an expression of this great admiration, the Eos Guitar Quartet has now asked the three composers, Leo Brouwer, John McLaughlin and José Antonio Rodriguez, to write a work for the ensemble under the motto “Homage to Paco de Lucía”. The result is works that enrich the repertoire for guitar quartet in an outstanding way.
In the spirit of Paco, the Eos Guitar Quartet plays original compositions by Marcel Ege and David Sautter alongside three dances by Manuel de Falla. The singing of the legendary flamenco singer Carmen Linares and the subtle accompaniment of the percussionist Ricardo Espinosa give this recording a wonderful addition and enhancement.
"I am very happy to listen to the latest recording from the Eos Guitar Quartet, not only because of its dedication to the late great Paco de Lucia, but also because of the fine music in this recording.
I particularly enjoyed the artistic liberty the quartet took in recording the music from so many fine composers. The use of the Flamenco singing and percussion were integrated very well and with subtlety. I would like to congratulate the arrangers of the musical works for their excellent and sensitive work on the compositions.
The playing is not only outstanding, but they have achieved an atmosphere that is undeniably Hispanic and profoundly heartfelt towards Paco himself.
Paco de Lucia was such a great musician and human being, that the impact of his magnificent guitar playing is felt throughout the world: From the great American Jazz musicians, the great European classical musicians, to the great musicians of India. A unique artist who will be missed forever.
I feel honored to be amongst the other composers on the recording and wish The Eos Guitar Quartet much and continued success in their important musical works." (John McLaughlin)
Eos Guitar Quartet:
Marcel Ege, classical guitar
Martin Pirktl, classical guitar
David Sautter, classical guitar
Michael Winkler, classical guitar
Guest:
Ricardo Espinosa, percussion 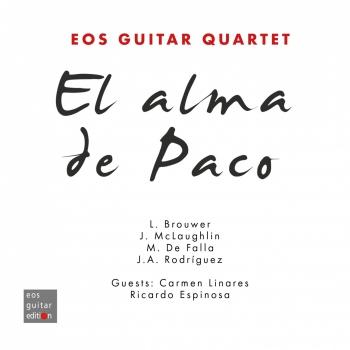 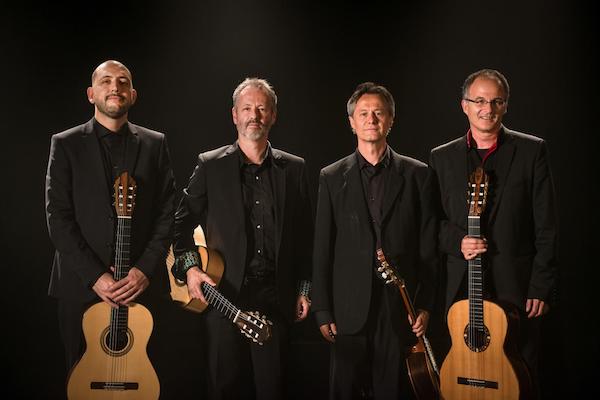 Eos Guitar Quartet
As one of the "few outstanding formations of their kind" (Basler Zeitung), the Eos Guitar Quartet has been casting a spell over their fans for over 25 years. With six CDs, programmes full of variety and too many concerts to count, the four guitarists from Switzerland have won the respect and enthusiasm of critics.
Whether it's classical, jazz, rock, modern avant-garde or flamenco – the Eos Guitar Quartet is comfortable playing in many styles. Even the Spanish audience – with the highest demands when it comes to guitar music – were convinced, thanks to the collaboration with the famous flamenco singer Carmen Linares.
Invitations to international festivals such as Córdoba, the Menuhin Festival in Gstaad, Bari in Italy or to Germany's Ludwigsburg Festival underline the significance of the quartet. Since 2011, the Eos Guitar Quartet have also been working as event organisers themselves (IN GUITAR).
Two factors are a considerable part of the enduring success of the Eos Guitar Quartet: their inspiring programme and the equality between the players in the quartet. No-one is just a soloist. Everyone pays attention to the others in a lively exchange when they make music.
Time and again, the Eos guitarists have also worked hard at their desks. Their arrangements broaden the range of music for four guitars with a sense of preciousness and value: Federico Garcia Lorca's Spanish folk melodies and songs, George Bizet's Carmen suite, as well as the guitarists' own compositions and, last but not least, commissioned works. Guitar luminaries such as Leo Brouwer, John McLaughlin, Ralph Towner, Sergio Assad and Roland Dyens – to name but a few – have composed original works for the Eos Guitar Quartet.
Marcel Ege, Martin Pirktl, David Sautter and Michael Winkler got to know each other when they studied together at the Music Academy in Zurich. They founded the quartet in 1985, taking their name from the Greek word for dawn. Master classes with notable artists at home and abroad as well as initial successes with the public and the press made the four of them a close-knit unit. Appearances on radio and television saw their success continue.
One highlight in the history of the Eos Guitar Quartet was the sold-out performance at the St. Jakobsstadion in Basel on 4 July 1992. Elton John and Eric Clapton desperately needed a support act at the Open Air concert in front of 50,000 spectators. Eos made the snap decision to travel from Spain, and rocked the 'Joggeli' arena with Luigi Boccherini's 'Fandango'.
At the IN GUITAR Festival 2013 in Winterthur, there was another emotionally charged moment in the history of the quartet. Co-founder Martin Pirktl played with the group for the last time and, for the last piece of the evening, gave up his seat to a new member – the young Argentinian- Julio Azcano.