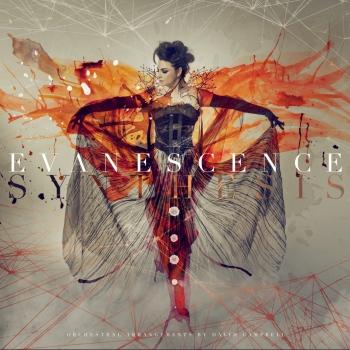 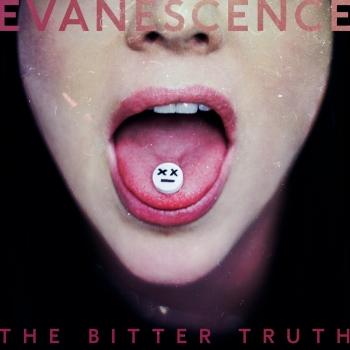 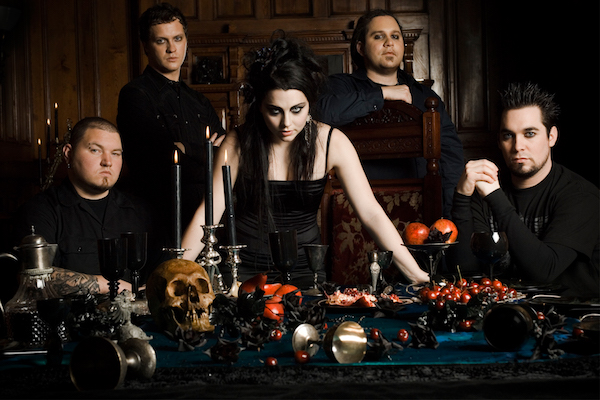 Evanescence
The band is named after the word evanescence which is usually defined as "the act or state of vanishing". Originally considered by many to be part of the Christian rock scene — and for a short time promoted in Christian stores — the band, however, made it explicitly clear they do not want to be considered a Christian rock band. Christian stores removed Evanescence from their shelves.
Evanescence's debut single "Bring Me to Life" was a global hit for the band and reached #5 on the American Billboard Hot 100. It was included in the soundtrack for the action movie Daredevil, along with their even more popular "My Immortal," and garnered recognition for the band at the Grammy Awards of 2004: The single was awarded Best Hard Rock Performance, and Evanescence was awarded Best New Artist.
Their first full length album, Origin (released in 2000), is relatively unknown. The Band also released two EPs in 1998 and 1999 which are difficult to find, and thus highly sought after by collectors. Not atypical, Origin and the EPs contain demo versions of some of the songs on their first major-label album. In fact, the recording of "My Immortal" found on Fallen can also be found on Origin, minus a handful of additional instrumental accompaniments. However, Lee herself does not consider the record to be an actual album; rather, she considers it merely a bundle of demo songs (some of which she says are not done properly) that was sent to record companies. Only 2500 copies of this record were ever made, and it is thus not generally available in record stores. In response, Lee encouraged fans to download the band's older songs from the internet during an interview.
The group was founded by Lee and former lead guitarist Ben Moody. The two met at a youth camp in Arkansas, where Moody heard Lee playing "(I'd Do) Anything For Love" by Meat Loaf on the piano. They discovered they shared a love of Jimi Hendrix and Björk, and they began to write songs together. For some time they were unable to find other musicians to play with, and did not have the funds to pay for professional assistance, thus they were unable to play live shows. However, a song of theirs entitled "Understanding" found its way onto local music charts, and demand for a live show increased. When the band finally did make an appearance, they became one of the most popular acts in the area.
In October 2003, Moody left the band abruptly in the middle of a European tour. The reasons for his departure are currently unknown. In an interview several months later, Lee said "we'd gotten to a point that if something didn't change, we wouldn't have been able to make a second record." Since then, Lee has said it was almost a relief that he left because of tensions created within the band. Terry Balsamo, from Cold joined the band, replacing Moody.
Evanescence is currently working on their second album, rumored to be ready for release in late 2005. Amy Lee, in an interview, has stated that the first single from this album will be called 'Prisoner for a Long Day'. Another song, rumored to be on the album, is the to-be-renamed song called "The Last Song I'm Wasting On You".
Evanescence fits roughly into the generic genre of rock, but in fact sounds quite different among its arsenal of songs. Many say that the band is goth rock, which is true in certain respects. Certainly, many of its songs focus on life's negative moments and darker themes such as lost love, loneliness and death. The piano plays a significant role in the majority of the band's music.
Critics have accused Evanescence of not being "wannabe" goth rockers, but really just pop. Lee, however, dismisses these labels and refuses to categorize and (to paraphrase) put in a box the band's music since she believes Evanescence has a unique sound.
Often, the band is often compared to nu-metal band Linkin Park, but many fans find this comparison innaccurate because it is based solely on their single "Bring Me to Life", which features the lead singer of Twelve Stones rapping over a short section of the music. This is not reflective of most of the other music, both on Fallen and in their earlier work. Other bands Evanescence has been compared to include Lacuna Coil, Nightwish and Within Temptation. Often, the covers that Evanescence does live come from modern prog/art bands, such as A Perfect Circle and Korn. This may say something about their influences.