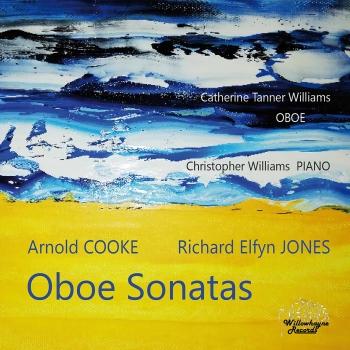 Catherine Tanner-Williams
Cornish oboist Catherine studied Music at Cardiff University, where she met her husband, the pianist Christopher Williams.
They began playing together almost from the moment they met, and he accompanied her for her final degree recital, her ARCM (Performing) Diploma, and her final postgraduate recital at the Royal Welsh College of Music and Drama. In their 25 years as a couple, on and off stage, they have performed together across the UK.
Their World Premiere recording of works by R.Strauss, Mozart and Glinka is available on Willowhayne Records.
While at university, Catherine gave the premiere of Anthony Power’s ...further in shadow... for oboe and orchestra, and won an award from The Countess of Munster Musical Trust to study with Douglas Boyd and Sophia McKenna. Her teachers also included David Cowley and Celia Craig. She has played principal oboe with many orchestras including Welsh Sinfonia, English Symphony Orchestra, Bath Philharmonia, Chamber Orchestra of Wales, Welsh Concert Orchestra, Orchestra de Cymru (with whom she recorded her own Oboe Concerto under Emmanuel Siffert), Festival Orchestra of Wales, Westward Chamber Orchestra, Burry Port Opera, St Woolos Sinfonia, Hereford Sinfonia, Cardiff Bach Orchestra (with whom she performed Bach’s Concerto for Oboe d’amore), and also freelanced with Cardiff Sinfonietta and BBC National Orchestra of Wales.
As well as her Oboe Concerto, other compositions include Darkness Falling, with Birdsong which she premiered with Chris in Cheltenham Town Hall; Hidden Birds for trumpet and piano, premiered by Philippe Schartz and Christopher Williams in Columbus, Ohio at the International Trumpet Guild; and the piano piece Blue and White; Dreaming of Sleep premiered in St David’s Hall, Cardiff by her husband.