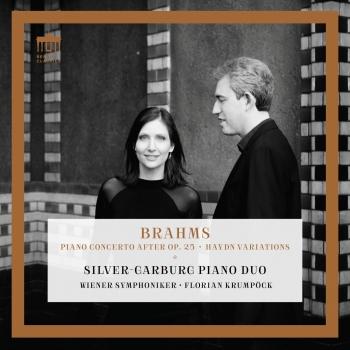 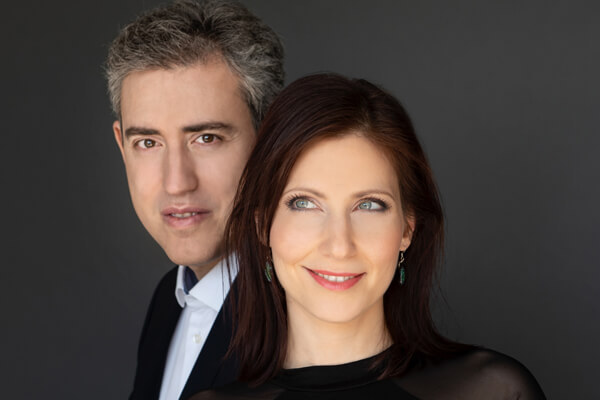 Piano Duo Silver Garburg
In the great and often underappreciated art of piano duo playing, Sivan Silver and her partner Gil Garburg are setting a new standard: acclaimed by audiences and critics alike, the duo has been invited time and time again by top orchestras, festivals, and concert organizers. They have performed in Carnegie Hall, Lincoln Center, the Vienna Musikverein, the Salzburg Festspielhaus, the Sydney Opera House, and the Berlin Philharmonie; they have concertized in approximately 70 countries on five continents; and they collaborate regularly with such orchestras as the Israel Philharmonic, the St. Petersburg Philharmonic, the Melbourne Symphony, and the Deutsche Kammerphilharmonie.
In 2014, the Graz University for the Arts unanimously chose the Silver-Garburg Duo to occupy one of the few extant professorships for piano duo. Previously, they taught at the Hannover Musikhochschule, the elite German piano school at which they themselves completed their studies in 2007 under Arie Vardi.
Their recording of Mendelssohn's concertos for two pianos and orchestra, with the Bavarian Chamber Philharmonic under Christopher Hogwood, has been called "breathtaking" (Bayerische Rundfunk) and "extremely exciting” (Süddeutsche Zeitung). Their latest album with Stravinsky ballets has been described as "grandiose" (Pizzicato, Supersonic award) and "thrilling" (Fono Forum, CD of the Month). The Frankfurter Allgemeine Zeitung raved about the "lyrical sensitivity and the ravishing technical mastery" of the duo, noting that only rarely does one experience "such spontaneous shouts of 'bravo'" at the end of a concert. The Independent concluded: "What a wondrous evening!"
A very special current project of the two Israelis living with their son in Berlin is a Brahms concerto based on the Piano Quartet in G minor. The Austrian composer Richard Dünser, with whom they closely collaborate, has successfully and exclusively transcribed the concerto based on two original versions by Brahms himself for piano, four hands, and string orchestra. They not only play this outstanding program with orchestras in Berlin, Vienna, Jerusalem, Bratislava, Spokane, Klagenfurt, Tel Aviv and Bremen but also release it as a world premiere recording with the Wiener Symphoniker on the Berlin Classics label.
After 20 years of playing together, Sivan Silver and Gil Garburg are establishing themselves at the top echelon of the music world. "As a piano duo, it’s easy to make effects with virtuosity. But that alone is far too little. We want to move our listeners emotionally and bring them to the core of the music".