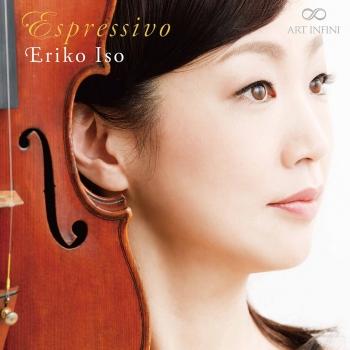 Eriko Iso
After studying at Toho-Gakuen School of Music with Prof.Toshiya ETO, Eriko Iso was invited by Igor Oistrakh to study at the Royal Conservatory Brussels. She was sent as a scholar by the Japanese Agency for Cultural Affairs to Brussels, where she completed a master degree with the Grand Prix. And she also got scholarship from Meiji-Yasuda Life Cultural Foundation and Rohm Music Foundation during her study in Europe. She has received many awards at music competitions both in Japan and overseas like Concours International d'execution Musicale Maria Canals de Barcelona and the Japan Music Competition, the Novosibirsk Competition, Tama Fresh Music Concours and so on.
She has given many recitals or made solo appearances in Japan, Brussels, Berlin, the Amsterdam Concertgebouw and Bolzano in Italy, which have enhanced her reputation around the world. She played as a soloist with many leading orchestras such as the Tokyo City Philharmonic, Novosibirsk Symphony, the Sapporo Symphony, Flemish Radio Symphony, Japan Philharmonic, Nagoya Philharmonic, Tokyo Philharmonic, Interpret Veneziani, Prague Chamber and Czech Philharmonic.
Musicality produced by her rich sensibility fascinates the audience. Her outstanding gift with brilliant and sharp skill and warm-spontaneous emotion are highly appreciated.
She has frequently appeared in concerts and on TV and Radio Programs and International Music Festivals like Miyazaki International Music Festival, Saito Kinen Orchestra or Verbier Festival. She performed Bach's Concert for two violins with Igor Oistrakh.
When she played for TV Environmental Commercial Film, she got aware of the importance of the environmental issue. Since then she gives charity recital every year and outreach program for schools or hospitals many times a year.
She released her solo debut disc "The Dancing Doll" from Victor Entertainment Inc. and then she released other discs like Sonata “Frank & Lukeu” from Exton, “Rond” and “Espressivo “from Sony Music Entertainment.
And she has already released “Casta Diva” and “Traviata Fantasy” from Columbia Music Entertainment and ”Duoism” from Sony Music Direct as a member of the two violins unit ”Duo Prima” . And “Fregranc of Aqua” from Sony Music Direct as a member of Aqua Trinity Trio.
She performed "Pray for love～Pas de deux in star light" by Roland Petit at EXPO 2005 AICHI JAPAN in collaboration with the world famous ballet dancer Tamiyo Kusakari, which drew millions of audience. In commemoration of her tenth Anniversary from the debut concert, she started the recital series and the first recital was on air at NHK TV which was highly acclaimed. She made a great success with a recital commemorating the 20th anniversary of her debut in 2017.
She is one of the foremost violinists among her generation.
She has been the personality of the radio program “Seaside Classic by Eriko Iso” at FM Yokohama.
She is also teaching at the Senzoku Gakuen College of Music.