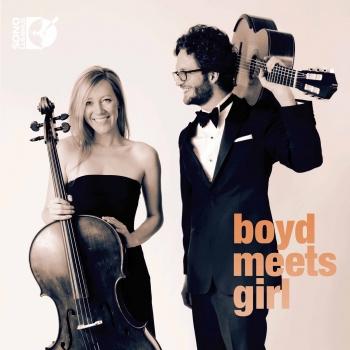 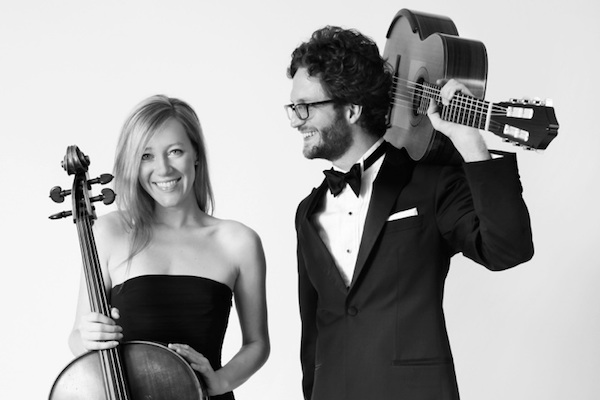 Boyd Meets Girl
pairs Australian classical guitarist Rupert Boyd with American cellist Laura Metcalf. Acclaimed soloists in their own right, as a duo they perform an eclectic and engaging range of repertoire, from the baroque through modern day, including many of their own arrangements. Boyd has been described as “truly evocative” by The Washington Post, and as "a player who deserves to be heard" by Classical Guitar Magazine, while Metcalf, also a member of the ensembles Sybarite5 and Break of Reality, has been called "brilliant" by Gramophone. Boyd Meets Girl has toured throughout the USA, Australia, India and Nepal, including appearances at the Newport Music Festival (Rhode Island), the Gharana Music Festival (Kathmandu, Nepal) and the Monsoon Music Festival (Kolkata, India). A happily married couple, the duo lives in New York City.
Laura Metcalf
renowned as a compelling solo and chamber musician, has been acclaimed for her “brilliant” playing (Gramophone Magazine),"gorgeous cello legatos" (The Washington Post), and described as “a cellist whose passion for music is as evident as her artistry and talent” (I care if you listen).
She has performed in nearly all 50 U.S. states and in countries on six continents, including, among many others, South Africa, Nepal, Argentina, Qatar, Japan, Kazakhstan, Mongolia, and Australia.
In 2016 Laura released her first solo album, First Day, on the Grammy-winning label Sono Luminus. Described as a “joyous program” by American Record Guide, the album debuted at #7 on the Billboard Classical charts.
Laura is the cellist of award-winning string quintet Sybarite5. Winner of the prestigious Concert Artists Guild competition, Sybarite5 has given hundreds of concerts worldwide, including appearances at Carnegie Hall, Library of Congress, and the Ravinia, Caramoor, Aspen, Wolf Trap and Chautauqua Music Festivals.
Laura also performs regularly with the popular cello-percussion quartet Break of Reality, recently selected for an ongoing world tour as musical ambassadors of the US State Department. In addition, she performs with her husband, classical guitarist Rupert Boyd in the duo Boyd Meets Girl, and has been repeatedly invited to the Newport Music Festival and the IMS Prussia Cove Open Chamber Music Sessions.
Outside of the classical realm Laura has performed on the David Letterman, Conan O’Brien, and Today Shows, and alongside such artists as Adele, John Legend and Nas.
Laura lives in New York City.
Rupert Boyd
New York-based Australian classical guitarist Rupert Boyd is acclaimed as one of the most talented guitarists of his generation. He has been described by The Washington Post as “truly evocative,” and by Classical Guitar Magazine as “a player who deserves to be heard.” His performances have taken him across four continents, from New York’s Carnegie Hall, to the Barcelona Guitar Festival in Spain, Strings-139 Festival in China, Festival de Musique Classique in France, Gharana Music Festival in Nepal, and every state and territory in mainland Australia.
In addition to his Carnegie Hall debut as part of the D’Addario Music Foundation’s “International Competition Winners in Concert” Series, Rupert Boyd’s recent performance highlights include the Newport Music Festival, National Gallery of Art (D.C.), Music in the Strathmore Mansion, Marlow Guitar Series, Grand Canyon Guitar Society, Boston Guitar Society, University of Denver, University of Hawaii and concerts in India, Nepal and the Philippines.
In New York, Rupert Boyd has performed at the Metropolitan Museum of Art, New York City Classical Guitar Society, Merkin Concert Hall, Trinity Wall Street, Bargemusic, (Le) Poisson Rouge, SubCulture, and with a diversity of groups such as New York Festival of Song and Moving Theater Dance Company.
Rupert Boyd has released two solo recordings. Fantasías (Little Mystery Records) was selected by American Record Guide as “Critic’s Choice” of 2016, and was described by Classical Guitar Magazine as “a triumph of brilliant assured playing”. His debut recording Valses Poéticos received the following review in Soundboard, the Guitar Foundation of America’s quarterly publication: “Boyd’s playing is beautifully refined, with gorgeous tone… musically and technically flawless… the album is first-rate.” Soundboard also described the eponymous work by Granados as “one of the best recorded performances of this work on guitar.”
Active as both a soloist and chamber musician, Rupert Boyd regularly performs throughout the world as part of the Australian Guitar Duo with guitarist Jacob Cordover, and in Boyd Meets Girl, with cellist Laura Metcalf. The Australian Guitar Duo was a prizewinner of the Chamber Music section of the Australian Guitar Competition, and its debut CD Songs from the Forest was described as “wonderfully entertaining” by Classical Guitar Magazine, and “very impressive” by Soundboard Magazine. Boyd Meets Girl is scheduled to release its debut recording in July 2017.