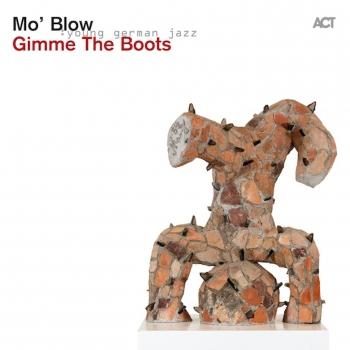 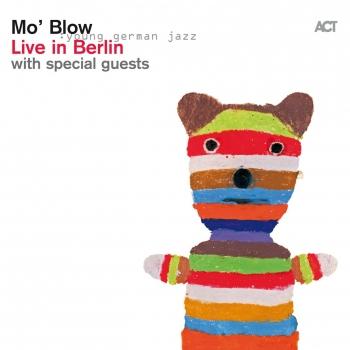 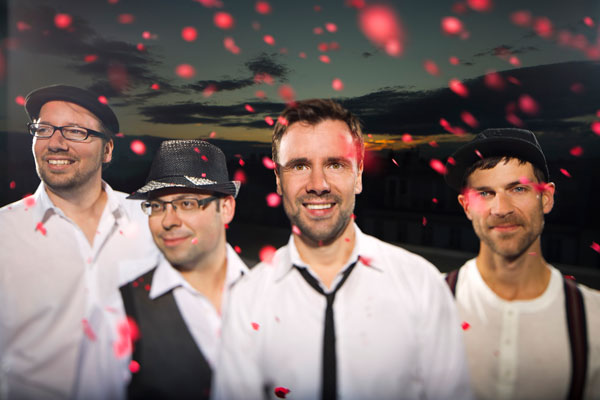 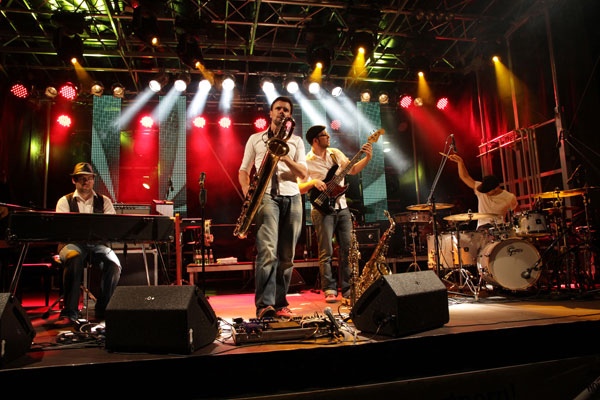 André Seidel - Drummer
has the longest Berlin experience of the Mo' Blower's. He was born there in 1981, learned the drums and while he went to school he already worked with various Big Bands. Amoung these there where the JayJayBeCe Orchestra and the Berlin Youth Jazz Orchestra. In the summer of 2003 he started his studies at the University of Arts in Berlin. After a while he started to come up with interesting and fairly unique drum styles. In between he is an expert in everything groovy, funky, fusion like, electric or dancy. That made him become the drummer of Mr. M, Berlin-Bahia, RatzeFatz, Mundoloco or Das gezeichnete Ich.
Some important steps in his so far career where a 2month lasting tour as a support for the Ostrock legend PANKOW, a support for Ronan Keating, the work with Robert Owens and different recordings with JayJayBeCe and the Berlin Youth Jazz Orchestra.
Felix F. Falk - Saxophones
Soon after receiving his A-levels, as well as a degree in alto saxophone, Felix F. Falk left his home town Neubrandenburg and moved to Berlin to pursue his University studies.
In his many different projects Falk uses a whole palette of instrumental combinations and colours moving effortlessly in a number of musical styles between Soprano, Alto and Baritone Sax. During a very stimulating stay in South America in 2001 Felix Falk began playing a number of indigenous percussion instruments which he incorporates more and more in his music.
His main project is the jazz funk band "Mo' Blow". He founded this group in 2002 in Liverpool (GB). The compositions he wrote for the first CD of this band he let himself inspire by the impressions of his time in England. He also wrote the songs for the second CD 'Funkatristic' and produced the album. Felix F. Falk also worked as sideman for artists like Das gezeichnete Ich or Herbert Grönemeyer.
Matti Klein - Pianist
is one of the two real Berlin Mo' Blowers. Well at least he was born there in 1984. As a little boy he already made the piano chair his place in one of the nicest areas of Germany: Mecklenburg-Vorpommern. Along to his classical training he started interesting for first Jazz projects.
Matti studied at the "Jazz Institut Berlin" and worked with different ensembles like the quintett "Das MrK", the Afro-Beat Sensation „KabuKabu“ or in projects with the actress and singer Bettina Schubert. He made important experiences on Tours and Workshops with the "Berlin Youth Jazz Orchestra" under the leadership of Nils Landgren or James Newton. Some Results are published on the CD "Berlin - Los Angeles 2005".
Musically the pianist is always aware of the heritage in his music but also he likes the newest representatives of Jazz like Esbjörn Svensson, Brad Mehldau or Keith Jarret.
Tobias Fleischer - Bassist
Born in Munich, Bavaria, Tobias Fleischer studied electric bass at the Bass School Munich (BSM) before he moved to England's Northwest to earn a Bachelor's Degree at Paul McCartney's Liverpool Institute for Performing Arts (LIPA). During his time in England, he played and recorded with a great variety of artists like Sweetmonk, El Nombre Flamenco and Revolucion Latina.
In 2003 he moved to Berlin to bring the groove back to the continent. On both electric and upright bass, Tobias feels at home in a variety of styles, spanning from Singer/Songwriters to New Orleans flavoured beats with The Booty Jive to world music with Klezmeyers and Zimbalada . He recorded for a variety of artists like Manfred Maurenbrecher, Ilja Schierbaum, George Nussbaumer or Vladiswar Nadishana.