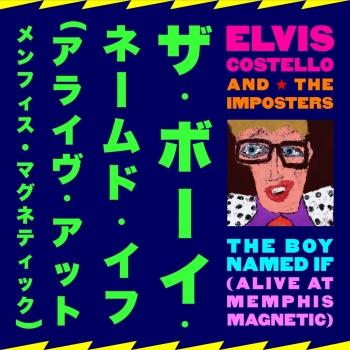 The Boy Named If (Alive At Memphis Magnetic)

Elvis Costello
began working as a professional musician 35 years ago, shortly after the release of his first album, “My Aim Is True”. He has made more than 27 studio records, three live albums and numerous guest appearances on stage, studio and screen as well as working as a record producer, bit-part actor and composing music for television drama and dance performance.
He has toured the world with The Attractions, The Imposters and the pianist, Steve Nieve, performing with symphony and jazz orchestras as well as in solo performance. His catalogue of songs includes collaborations with Paul McCartney, Allen Toussaint and Burt Bacharach with whom he won a Grammy for “I Still Have That Other Girl” from their 1998 collaboration, Painted From Memory. Costello’s songs have been recorded by George Jones, Chet Baker, Johnny Cash, Roy Orbison, Dusty Springfield and Robert Wyatt.
Elvis Costello and The Attractions were inducted into the Rock and Roll Hall of Fame in 2003. In the same year he was awarded ASCAP’s prestigious Founder’s Award. His last record was 2010s National Ransom, produced by T-Bone Burnett. Between 2008 and 2010, Costello was the host of twenty episodes of the interview and music show, “Spectacle” on the Sundance Channel.
" class="ng-binding ng-scope">Elvis Costello And The Roots