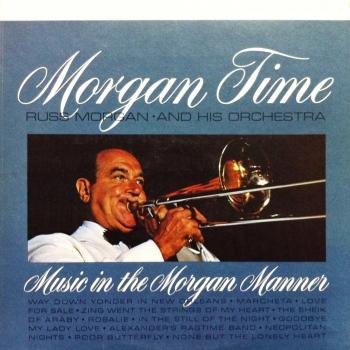 Russ Morgan
was born April 29, 1904 in Scranton, Pennsylvania. Russ was a big band orchestra leader, pianist, trombonist, composer, and musical arranger. Morgan was encouraged by his parents at the young age of 7 to pursue his musical interests. His father had played the drums when he wasn’t working in a coal mine and his mother was a pianist. Morgan began playing in a local band, The Scranton Sirens, which was popular during the 1920s in Pennsylvania. The Scranton Sirens relinquished quite a few magnificent artists into the world of music. Such names as, Tommy Dorsey the famous trombonist and big band leader, Billy Lustig a violinist, and older Dorsey brother Jimmy on the saxophone.
Morgan’s greatest success was when he was offered the position of Musical Director for Detroit Radio Station WXYZ. He had an extremely popular radio show called “Music in the Morgan Manner.” He stayed successful into the 1950s with his orchestra playing popular music for listening and dancing, they called these bands “sweet bands.” Morgan passed away August 7, 1969 in Las Vegas, Nevada at the age of 65. Russ Morgan holds a Hollywood star in L.A. for his contributions to recording.